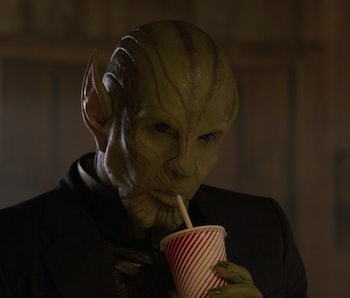 Secret Invasion is quietly shaping up to be one of the most interesting Marvel titles of 2022. Based on the comic book storyline of the same name, the Disney+ series is set to focus on the conflict that breaks out when it is discovered that a legion of Skrulls has begun secretly invading Earth by posing as various superheroes, politicians, and other powerful figures.

Secret Invasion is also set to introduce some high-profile actors to the Marvel Cinematic Universe, including Emilia Clarke, Olivia Colman, and Kingsley Ben-Adir, though, it’s still unclear who any of those actors will be playing in the series. That said, an alleged new Secret Invasion plot leak suggests the series could feature one Marvel Comics character with some notable mutant connections.

The Leak — The Direct reports that actor Killian Scott will play a Skrull named Fiz in Secret Invasion. The outlet additionally claims Fiz will be based on a Skrull with the same name from the comics — one with the mutant ability to change his size at will. (That’s right, there’s a mutant Skrull.) In the comics, the character’s mutant powers result in him traveling to Earth to hang with the X-Men, including Charles Xavier (aka, Professor X).

As is always the case with these kinds of MCU leaks, make sure to take these claims with a pretty big grain of salt for the time being — especially given how little we know about Secret Invasion and its cast of characters.

The Fiz of it All — It should be stated that even if Killian Scott’s Secret Invasion character really is the MCU’s version of Fiz it still doesn’t necessarily mean he’ll be a mutant in the series — or that he’ll have any existing connections to Charles Xavier and the X-Men. In fact, previous rumors about Scott’s character in the series have suggested that he’ll be a villain in it, which — if true — would also indicate that Scott’s Fiz won’t be like the one from the comics.

Alternatively, there is always the chance that Secret Invasion’s Fiz — assuming the character really is in the Disney+ series — could play a role in helping bring mutants into the MCU. However, thanks to just how secretive Marvel is being right now about basically everything involving mutants, it’s hard to know which characters may or may not factor into the studio’s overall plans.

Notably, it is heavily rumored that Professor X will have a cameo appearance in next year’s Doctor Strange in the Multiverse of Madness. While that rumor remains unconfirmed, it’s worth noting since an appearance in the Doctor Strange sequel would make Charles Xavier the first mutant to appear in the MCU.

If that does end up happening, it raises the possibility that Marvel’s mutant storylines will finally start unfolding in the MCU in 2022 — the same year that both Multiverse of Madness and Secret Invasion are set to premiere.

The Inverse Analysis — Until more details about Secret Invasion are finally revealed, there’s no way of knowing for sure just how accurate this alleged leak is. Nonetheless, it raises an interesting new question about whether or not the series is, indeed, one of several upcoming MCU titles that will connect in some way to Marvel’s mysterious, overarching mutant plans.

At the very least, the presence of a character like Fiz in Secret Invasion suggests the Disney+ series may introduce Mutant Skrulls, which is an exciting possibility in and of itself.

Secret Invasion is expected to premiere on Disney+ in 2022.