“Life hits you hard enough, you're gonna start hitting back.” 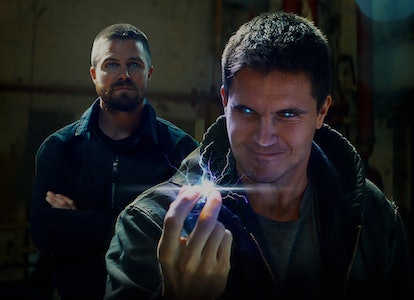 Hear me out here: What if superheroes were real? I know, I know, it’s not the most original premise in the world. It’s the plot of The Incredibles, The Boys, Freaks, and the completely unrelated movie Freaks: You’re One of Us. But each of these works completely focused on the powers as the main engine of the plot: the main characters have powers, and that’s what caused their problems.

This 2019 film, now streaming on Netflix, takes this tried-and-true premise and adds elements of state control and classism, delivered with passionate acting and a star-studded cast.

Code 8 is a 2019 film written and directed by Jeff Chan. It began as just a short, the brainchild of cousins (and Arrowverse stars) Robbie and Stephen Amell. That short film was connected to an IndieGoGo campaign with a goal of $200,000. That goal was blown out of the water, and the Amells ended up raising millions for their passion project.

Looking at the premise, it’s easy to understand why fans were willing to see this film through to the end. In the world of Code 8, superpowered beings were at one point an important part of the workforce. But much like many blue-collar workers, they were eventually replaced by automation. The film stars Connor Reed (Robbie Amell) as one of the four percent of humans on Earth born with superpowers.

Connor now spends his days working under-the-table manual labor jobs using his electrokinetic powers, despite increased surveillance from the powers that be. He needs to make enough money to pay for treatment for his mother, whose brain tumor is causing her to lose control of her powers. Out of desperation, he turns to the seedy underworld of Psyke — an illegal psychoactive substance extracted from the spinal fluid of powered people.

Over the course of the film, Connor gets tied up in heists, other superpowers, Psyke, and classic crime thriller action. He meets Garrett Kelton (Stephen Amell, though there’s no relation between their characters), who helps him refine his power from making lightbulbs flicker to being able to short out aircraft. Together, they face off against Officer Park (Sung Kang), who seeks to control the powered population with Chappie-style droid police officers.

Though elements of Code 8 are similar to other stories, this film has something that’s almost impossible to find in blockbuster cinema: passion. The Amell cousins worked for four years trying to make this movie happen, so they give every single ounce of acting energy throughout.

“It was just a blast. We were in Toronto, our family is there, our friends are there, we got a great crew,” Stephen Amell told Entertainment Weekly. “We had a very, very tight window because I basically said, ‘Yes, I want to be involved, but you guys have me for basically five weeks. That’s it. I’ve got no wiggle room.’”

It’s possible to forget Code 8 is a sci-fi movie at all. Powers aren’t the be-all-end-all of the plot, they’re character traits just like any other. For Robbie Amell, this was the goal from the start. “We wanted to make a character crime drama with sci-fi blended into the background. We wanted it to feel like five seconds into the future, not fifty years,” he told ComicsBeat.

Despite its relatively small budget, Code 8 was a great success. It was even slated for a follow-up series on now-defunct streaming service Quibi. While that series remains in limbo, now is the time to check out the film for yourself. Hopefully, a show of support from the public will assure us some sort of sequel, just as public support made Code 8 possible to begin with.

Code 8 is now streaming on Netflix in the U.S.