Robert Englund on the one reason he'll never play Freddy Kruger again, how he created Luke Skywalker, and his latest new nightmare

“My entourage costs more than me.” 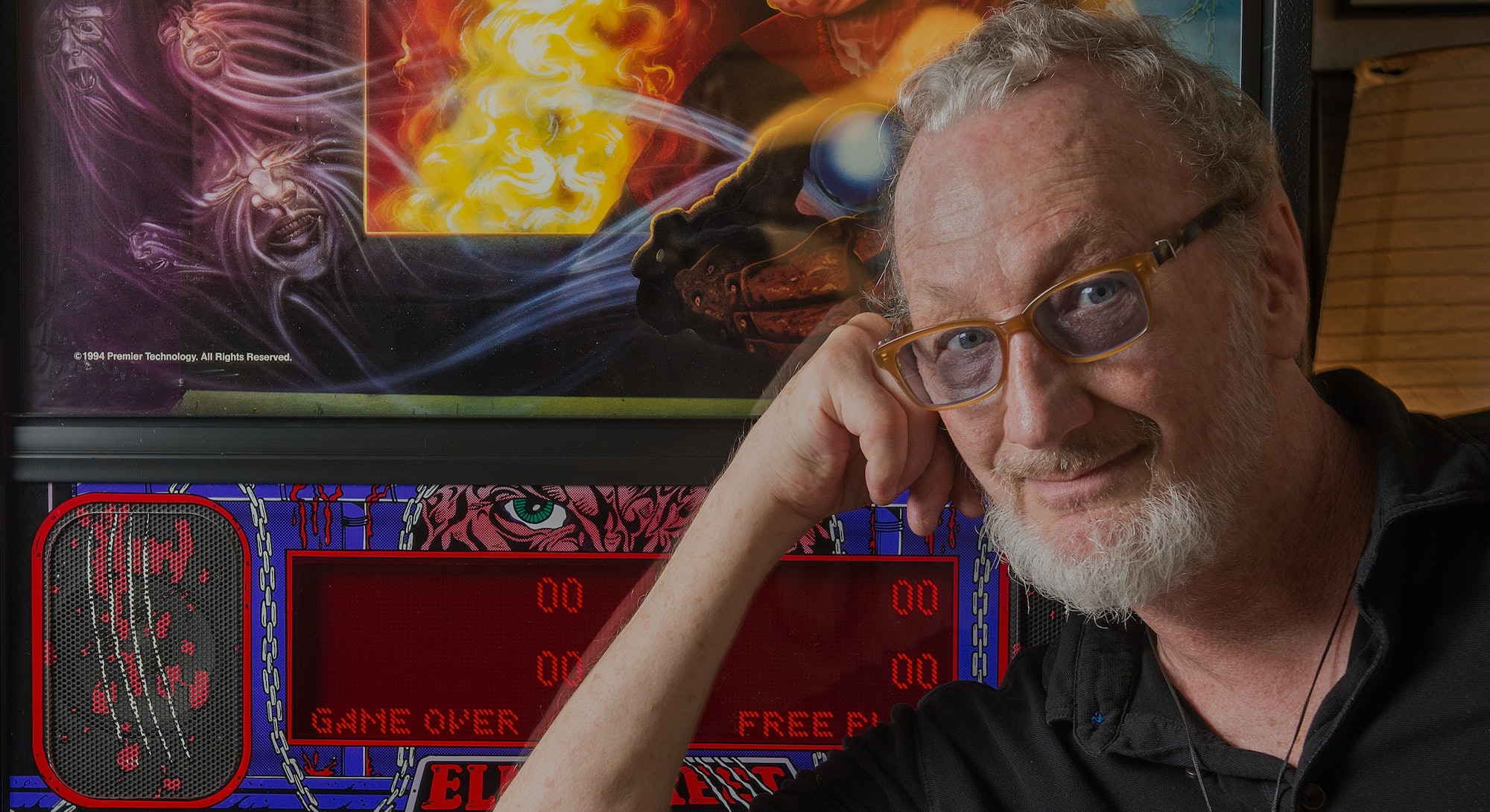 In a world where Fantasy Island gets a horror-movie reboot and The Shining sequel arrives 40 years later, it seems inevitable that Freddy Krueger will return too.

But if that happens, Robert Englund (the original Freddy) won't be the one wielding the blade gloves this time around. "Oh, I'm too old, they gotta find somebody new," Englund tells Inverse in an interview promoting his new horror history anthology True Terror.

But that's not the only reason Englund is done terrorizing the dreams of teenagers. Even a small Krueger cameo can eat up a shocking amount of any show or movie's budget, and not for the reason you'd think.

"You know, the problem with me ever doing cameos and things like that is all my makeup men have Oscars now," Englund says. The people that want to hire me forget how expensive those guys are. My entourage costs more than me."

That didn't stop Englund from making a brief appearance on The Goldbergs in 2018, but he says that's as far as he'll go. If Freddy is coming up, they "gotta find somebody new," he says, adding that after the rights reverted to Wes Craven's estate the family is considering everything from prequels and sequels to "anime and graphic novels."

In a phone call, Englund discusses everything from the future of Freddy Krueger to a scene from the meta-horror classic New Nightmare that he never got to film. He also discussed his friendship with Wes Craven, his favorite scary movies (he loved Midsommar), and his new Travel Channel show True Terror.

The interview below has been lightly edited for clarity.

INVERSE: True Terror is something new for you. It’s an anthology series you host. What about the show appealed to you?

ROBERT ENGLUND: Well, the hook for me was not only the challenge of both hosting and narrating, which is fun to do — I do a lot of voiceover work and I've narrated a couple of movies — but what was fun for me was to blend the onscreen hosting challenges with narrating. When to be conversational, when to be spooky and scary, and exactly how to define the persona of Robert Englund, host of True Terror. It’s a little bit Rod Serling in The Twilight Zone and a little bit Vincent Price.

I was worried because some of these reenactment shows are a little cheesy and a little too repetitive, but I really like ours.

Wes Craven’s New Nightmare turned 25 last year. It was way ahead of its time and introduced the meta-horror comedy that led to Scream and lots of other scary movies. What was it like making that movie at the time? Did people understand what you and Wes were going for?

What happened with that film is we were a tad ahead of our time. It was a successful film, but it wasn't what we’d call a hit.

But then Wes did Scream and the entire Scream franchise, which was also meta about the fans and using the vocabulary of the fans and that attitude of fans who know where the scares are going to be. We know you're trying to manipulate us. We know all the tropes that you guys trot out.

For me, it wasn't particularly difficult. I loved the sort of Uber Freddy makeup that I got to wear in that film; almost a super Freddy, if you will. It was different and fun and it made Freddy a little more terrifying. I played him slightly larger.

We also got to play ourselves and mock ourselves in New Nightmare. Wes, Heather Langenkamp, and I, we were all successful and we got to have a little bit of fun with ourselves.

Is there anything that got cut from New Nightmare? Anything the fans don’t know about that movie?

There was a sequence in the screenplay that we never shot for my character, Robert Englund. I play myself in the film and I'm having a nightmare. I'm in bed with my wife up in the Hollywood Hills in my Spanish mansion — which I don't own, but that was Wes's imagination — and I'm tossing and turning and we go into my nightmare. And my nightmare was about whether I was trapped in the role of Freddy. In the scene, Robert Englund is in a spider's web being cocooned by a giant black widow. And on the underbelly of the black widow are red and green stripes, the same color stripes as Freddy's sweater.

I thought was a brilliant symbolic sequence. You know, that I was worried about my career at the time. But we never shot it, we ran out of money.

It also helps explain why the character Robert England kind of runs away in the movie. I disappear from the story and that’s why. I’m haunted by that nightmare we never filmed.

Working with Wes Craven for all those years must have been an amazing experience. What's something you know about him that no one else knows?

I worked with Wes in three movies and a television series up in Vancouver, Canada for six months. On the TV show, Wes was director, creator, writer. He had the first laptop I've ever seen on a set. So my wife and I scored the best department of anybody on the set. We were near the famous Stanley Park, which is the most beautiful urban park in the world, and I had my dog and we had a big old big screen TV.

“That night, Wes Craven was my friend. He wasn't my boss anymore.”

One night, Jack Coleman from Heroes and Wes and I were all drinking and watching Saturday Night Live and it was the debut of a famous sketch called "Headwound Harry" starring Dana Garvey. It's very dark, edgy sketch humor.

We're all sitting around at midnight watching this on my TV, and Wes started laughing. He couldn't stop. He almost fell off the couch, you know, he almost kicked my coffee table over and spilled the wine. It's the first time I ever saw Wes kind of out of control. He's like a big goofy kid, you know. Wes was always doing bad puns, like a genius 14-year-old.

That night, Wes Craven was my friend. He wasn't my boss any more.

You had a brief cameo as Freddy Krueger on The Goldbergs that got a lot of fans excited the character might return. How did that happen? Was it a good experience?

The nicest email I ever got was from Adam Goldberg asking me to be on the show, and it was an offer I couldn't refuse. My late agent Joe Rice, it was his family's favorite show. I couldn't say no.

You know, the problem with me doing cameos is that all my makeup men have Oscars now. The people that want to hire me forget how expensive those guys are. My entourage costs more than me. They need assistants. But The Goldbergs is about the ‘80s and Freddy's very symbolic of the 80s into the ’90s. So it was a good fit. They treated me great and I got a chance to work with Wendi McLendon Covey, who I’ve been a big fan of ever since Bridesmaids. So that's why I said yes.

So... would you ever play Freddy again in another Nightmare movie?

Oh, I'm too old. They gotta find somebody new. The rights have returned to the Wes Craven estate, and I believe the family is looking at all projects new and old: new screenplays, old screenplays, prequels, anime, and graphic novels — all the stuff. The rights are all back with them and they'll make those decisions.

According to Wikipedia, you’re the one who got Mark Hamill the role of Luke Skywalker in Star Wars. Is that true? What actually happened?

I told Mark about the movie, that’s it. We both loved George Lucas. We both loved American Graffiti. Mark was a big TV star then and I was a movie actor.

I had been on an audition for Apocalypse Now and they sent me across the hall for 30 seconds to have my Polaroid taken for Star Wars. While I was there, I glanced at the audition scene and I noticed this character called Luke Skywalker. When I went home, Mark was on my couch watching The Mary Tyler Moore Show and drinking a beer.

So I told him about it, but I didn't get him the part or recommend him. I told him, and his agent got him in there.

Well, it evolves with me constantly. You know, my most recent I would say is Midsommar. I love Midsommar and I loved The Lighthouse, the movie winning all these awards recently directed by the guy who made The Witch. Obviously, Jordan Peele's Get Out is pretty essential. I also love Rosemary's Baby.

There's a 1974 Brian De Palma movie called Sisters starring Margot Kidder and a brilliant performance by the late actor William Findley as a mad doctor. It's about Siamese twins and the original, there's been a remake, but the original is just a great low budget film. Some of the best split-screen I've ever seen in my life. It's got a great nightmare sequence using microfiche.

What’s your favorite story in the anthology?

"Buried Alive" is an amazing one for me because it's one of the stories that's absolutely verifiable and true, and yet it's also one of the most horrific.