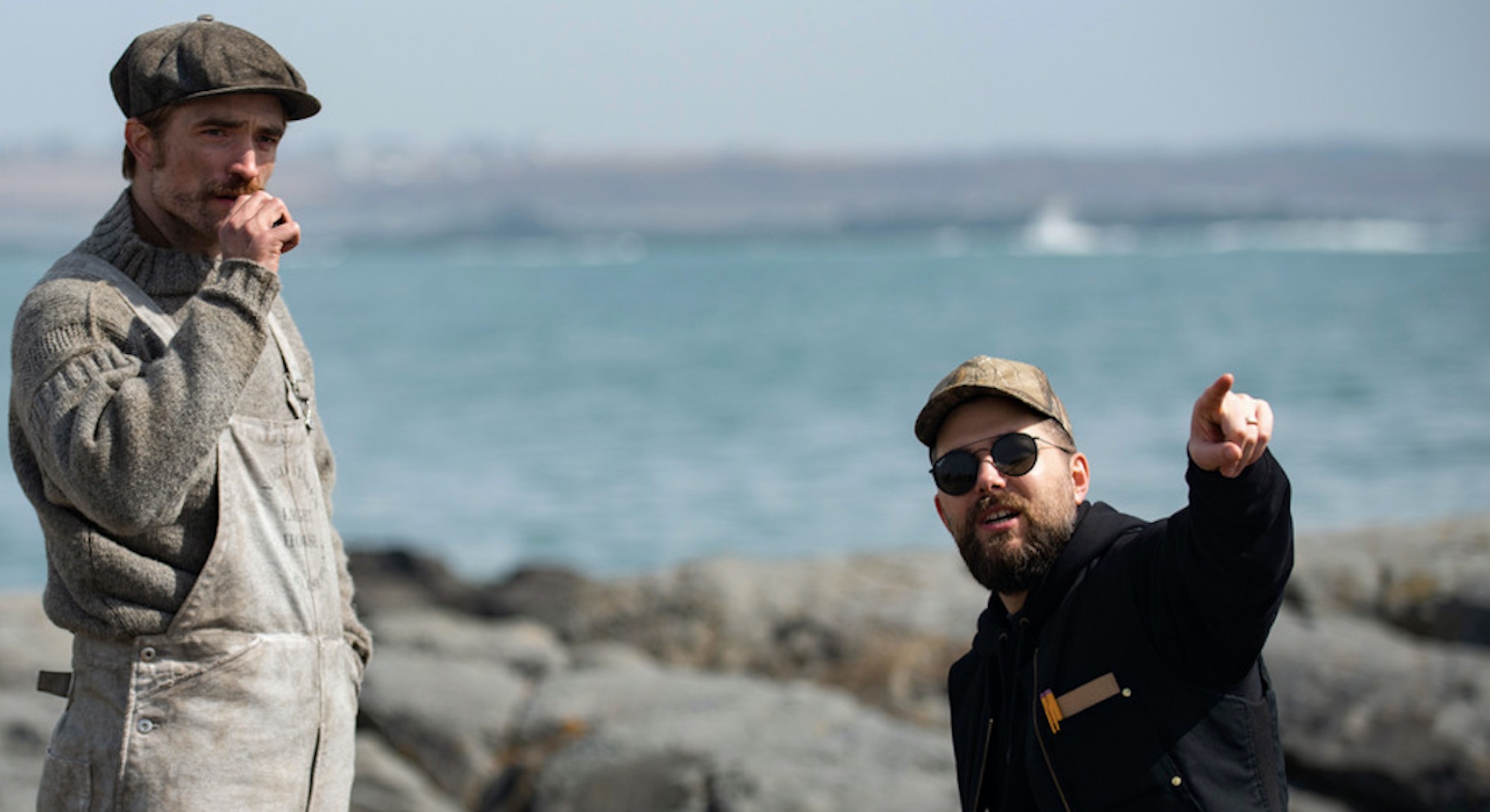 It’s a brutally hot October morning in New York but Robert Eggers is dressed all in black.

Black sneakers, black crew socks, black shorts, and a black Carhartt t-shirt — plus a thick black beard and a heavy silver ring with a demonic symbol to complete the look. We’re seated in a temperature-controlled glass conference room in the Manhattan office of A24 studios, but Eggers is painfully aware of the weather outside.

“Maybe I should write a climate change movie,” he says as I race to hit the record audio button on my iPhone. When I ask how that kind of story fits into his current œuvre — historical New England horror — he replies flatly, “There are a lot of periods of apocalyptic thinking.”

Eggers would know. More than a filmmaker, he’s a history obsessive. His first movie, The Witch (2015), was praised for the period-accurate dialogue of its characters, a pilgrim family in rural 17th century New England, plagued by a witch of the wood. The Witch is engrossing and terrifying in equal measure. While working on the film, Eggers regularly visited the Plimoth Plantation, a recreation of the original Plymouth Colony not far from his childhood hometown in New Hampshire.

“I loved going to Plimoth Plantation as a child,” Eggers told a local paper in 2016, “but it was six years ago, when I began my research on The Witch, that my research became truly ‘serious.’”

Three years later, Eggers returns with The Lighthouse, another historically accurate thriller. With his his latest project, Eggers trades witchcraft and a family for Lovecraftian tentacles and a pair of isolated lighthouse keepers, played by Robert Pattinson and Willem Dafoe. Over two hours, they slowly lose their minds while speaking the dialect of the 1890s New England working class.

It’s easy to see the pattern here, and even as Eggers attempts to try something new (The Lighthouse is equally scary and hilarious, but rarely only scary) he can’t seem to escape history. Like the lighthouse keepers in his new movie who become addicted to the light itself, Eggers is drawn to the brutality of the past. His love for research drives him just as much as a desire to make an audience scream or laugh. And the tentacles, that’s just fun.

“I wasn’t reading Lovecraft when I was writing this,” Eggers tells Inverse. “I don’t think my brother was either, but we’ve read a lot of Lovecraft and at some point I was like, ‘Let’s just fucking put in some tentacles.’”

The Lighthouse begins as Pattinson’s character, a young recruit fleeing a bad situation, arrives on a rocky New England island (the movie was actually filmed in Nova Scotia) to work under a lighthouse master played by Dafoe. What’s supposed to be a reprieve for Pattinson’s character devolves into chaos as a never-ending storm strands the duo, and they start to run low on food, booze, and sanity.

By the end of the movie, it’s unclear how much time has passed or what was real. Both characters become equally unreliable narrators out of touch with reality as they hallucinate mermaids, drink kerosene, and alternate between trying to kill each other and slow dancing together.

As wild as all that sounds, Eggers is able to ground his story through historical accuracy, both in the way these characters look and talk and how the movie was shot (black and white with a square aspect ratio). For the writer and director, it all comes back to his obsession with history.

“I wouldn’t particularly like to make a movie that takes place today.”

“I am, for whatever reason, enamored with the past,” he says. “I wouldn’t particularly like to make a movie that takes place today. I love recreating a world. I love doing research. It makes me super-engaged and super-happy, and I’m super-passionate about it.”

A big part of that is the dialogue. Eggers and Max, his brother and writing partner, read everything from Herman Melville and Robert Louis Stevenson to sailors’ diaries and old interviews with lumberjacks. One of the best sources they found, however, was the work of the Maine-based author Sarah Orne Jewett, who perfectly captured that specific moment in space and time.

“She was interviewing farmers and sea captains and fishermen and writing her stories in dialect phonetically,” Eggers says. “So her work became the biggest and most helpful resource for me and my brother.”

Even the various drinking songs that Dafoe’s character recites come straight from the pages of history. “That was a slightly tailored version of an old sea prayer,” the director says, adding that those lines were one of the first things he settled on before the rest of the movie came together so long ago that he can’t even remember exactly where they come from.

Why ‘The Lighthouse’ is shot with a square aspect ratio

The way The Lighthouse looks is a part of that history too. “I always pictured the film in black and white,” Eggers says. “I just felt like atmospherically there was no other way to capture the story.”

While first coming up with the movie, he considered shooting in digital, but after the success of The Witch, he was able to pay for black and white 35 millimeter film that he says “harkens back to the past.”

More important than its lack of color is The Lighthouse’s unsettling square aspect ratio, especially in theaters where the movie fails to fill more than half of the screen. Again, there’s a good reason for this, and it has everything to do with history. Working with the California-based equipment company Panavision, Eggers was able to shoot his film using old lenses from as early as 1905. The only catch? Those lenses are spherical, so cutting what he recorded into squares saves more of each shot than flattening it into a standard rectangle.

Sensing that I’m not quite following his logic, Eggers grabs a square coaster off the table between us to illustrate his point. Holding his hands in a perfect circle above the coaster to demonstrate how they almost fill the space of the square, he adds that this uncommon framing also worked well with the movie’s primary setting.

“This is a very good aspect ratio for framing vertical objects like a lighthouse and cramped interiors, like inside the lighthouse station,” he says, “and to shoot a juicy closeup of Willem Dafoe or Robert Patinson, you’re using more of that lens.”

“If you’re shooting a scene and it’s raining and the rain is not reading in a close-up, you’re going to have to spray Robert Pattinson with a fire hose.”

After filming ended on The Lighthouse in 2018, stories began to emerge of a brutal workplace. A conversation between Dafoe and Pattinson published in Interview magazine featured the two actors complaining of “harsh conditions” on the rainy island where the movie is set, and for one particular scene set in the middle of a storm, Eggers apparently aimed at fire hose straight at Pattinson’s face.

“That’s the closest I’ve come to punching a director,” Pattinson told his co-star in the interview. “However much I love Robert [Eggers], there was a point where I did five takes walking across the beach, and after a while I was like, ‘What the fuck is going on?” … It was like some kind of torture. It definitely creates an interesting energy.”

When I bring up this story, Eggers doesn’t deny it, but he’s also quick to downplay the actor’s gripes.

“He knew what he signed up for.”

“I don’t believe in Kubrikian torture,” he says. “But if you’re shooting a scene and it’s raining and the rain is not reading in a close-up, you’re going to have to spray Robert Pattinson with a fire hose so the rain will read in the close-up. He knew what he signed up for, and he was extremely professional on set. In fact, I heard from the wardrobe trailer that he was willing to do it again if need be.”

That said, Eggers admits that it wasn’t exactly a fun set. The Lighthouse is full of lighthearted moments where Pattinson and Dafoe drink, dance, and chase each other with axes, but between shots there was very little sense of camaraderie.

“If you’re in a small confined smelly space that’s waterlogged and you’re wearing freezing cold, soggy period-accurate underwear covered in blood and dirt, when I say cut, you want to go back into your trailer and get warm and get ready for the next scene,” Eggers says.

It’s possible the only person who wasn’t miserable on set was the mermaid (played by Valeriia Karaman). The idea to include a mermaid predates much of the movie, which was originally meant to be a ghost story in a lighthouse. But even as the story evolved into something less explicitly horror, the mermaid remained, a symbol of Pattinson’s growing disconnect from reality.

“When my brother and I finally sat down in earnest to write this thing, I was like, this scene happens in the midpoint and then we found ways for her to be more integral to the story as a whole,” Eggers says.

So when Karaman showed up on set early, there wasn’t much for her to do besides practice swimming with her prosthetic tail, and Eggers tried to warn her. Slipping between accents, he reenacts their conversation.

What’s Robert Eggers’ next project after ‘The Lighthouse’?

With The Lighthouse finished, Eggers’ next move hasn’t been revealed. He reportedly has a few other projects lined up, including a “medieval epic” called The Knight and a TV miniseries about Rasputin. There’s also a long-rumored Nosferatu remake that might happen, eventually, but for now, he’s being cagey about his next project.

“Maybe I won’t make another thing and five years later I’ll be back with you talking about the end of this New England horror trilogy. Who knows, you know?”

“I don’t know what’s going to happen next until it’s happening,” he says. “So I’m in prep for something else. It does take place in the past. It’s not a horror movie, but who knows, maybe I won’t make another thing and five years later I’ll be back with you talking about the end of this New England horror trilogy. Who knows, you know?”

Then again, if The Lighthouse is any indication, the director may already be subtly moving away from horror, even as he remains firmly planted in history.

“The intention was for the film to be funny,” he says. “ After making The Witch, if I was going to make another movie exploring misery, I want it to be able to laugh at the misery. The hope is that you think, ‘Oh no, like I’m watching a horrible Hungarian art house movie. Get me out of here.’

“And then Willem Dafoe farts, and there’s some hope that it might be more than that.”