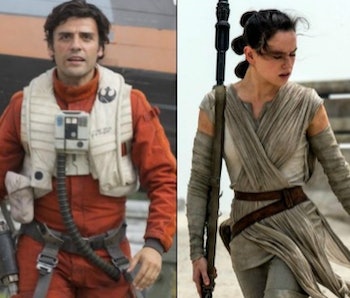 Does Rey need a romance to be a fully developed character? Obviously not. Even so, the ending of Rise of Skywalker fulfilled the fantasies of one of the most anticipated fan pairings ever, making Rey and Ben more than just Force-frenemies. But what if Rey and Kylo Ren were never meant to be? In the leaked script for Colin Trevorrow's canceled version of Star Wars: Episode IX — Duel of the Fates, it appears Rey and Poe would have had a full-on romance, complete with at least one kiss.

While this might have been hard for some fans to accept, this unrealized romance interrogates some of the sexist teachings of the Jedi, and gives Rey (and Leia) more agency than she had in The Rise of Skywalker.

The Star Wars rumor mill has long claimed Trevorrow asked Last Jedi director Rian Johnson to include the scene where Rey and Poe meet and share a sly smile so that a romance in Episode IX didn't come out of nowhere. In June 2017, Trevorrow did acknowledge he asked Johnson to slip a specific scene into The Last Jedi, though neither has confirmed that this was the reason.

Still, with the Duel of the Fates script out there in its entirety, how do we feel about Rey and Poe getting romantic? It totally works for three reasons.

1. Rose and Finn spend a lot of time together in Duel of the Fates, so Rey needed a buddy

Unlike Rise of Skywalker, the script for Duel of the Fates does not sideline Rose Tico and completely honors her relationship with Finn. The awkward Rey-Finn tension doesn't exist in Duel of the Fates, because Poe and Rey are off doing their own thing. While not everyone needs to be paired off, preserving the Finn and Rose pairing would have been a good thing.

2. Poe is better than Kylo Ren by several billion light-years

While I object to Rey needing a romance of any kind, I enjoyed Good Boy Ben Solo as much as the next Adam Driver fan. Still, the guy is terrible boyfriend material. He murdered Han Solo in front of Rey, he slaughtered all sorts of people in the Resistance, and he invaded Rey's mind more than once. In all versions of the sequel trilogy, Kylo Ren is a terrible person, and Rey's affection toward him often feels like Stockholm syndrome.

In Duel of the Fates, Poe Dameron does none of this crap to Rey. He's respectful and does his best to not interfere with her Jedi training. He's supportive and very clearly learned some lessons from The Last Jedi. As far as Han Solo-types go, he's actually not a scoundrel.

3. Rey having feelings for Poe is a giant "fuck you" to Jedi patriarchy

At one point during Duel of the Fates, Leia notices Rey is withholding her feelings for Poe because she's afraid of violating the Jedi code. Similarly, Anakin was told he couldn't get married and have kids, but he did it anyway and kept it a secret, which is partially why he became Darth Vader.

What's different here is that Leia calls out the Jedi teachings for being oppressive as hell. Rey tells Leia she can't follow her feelings for Poe because of the "rules," to which the general responds, "Written by who? Some old man a thousand years before you were born."

It's a long-overdue critique of the creepy, prude-ish ways of the Jedi, and speaks to the notion that searching for balance doesn't mean you have to deny who you are. A vague trace of this idea survives in The Rise of Skywalker, when Leia tells Rey to "never be afraid of who you are." But since Rey's identity is all over the place in Rise of Skywalker, it doesn't really have the same punch.

Could this scene have been rewritten after Carrie Fisher passed away? Perhaps it was Luke giving Rey the advice — or Rose or Maz Kanata? This notion could have survived into the final movie, and it's a bummer we didn't get some version of it.

What's most interesting about the Poe-Rey romance in Duel of the Fates is not that it's sexy, forbidden, or emotionally satisfying. Instead, the pairing represents freedom, stability, and happiness for Rey. And although Rey did get a "happy" ending in The Rise of Skywalker, it was also a very lonely one. Being adopted by the ghosts of Luke and Leia is one thing. Having a living, breathing partner who lives with you and supports you — that's something else.