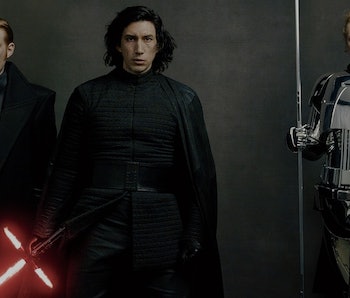 The story of the Resistance and its struggles against the evil First Order is being planned out meticulously in a war room not unlike the Rebel base on Yavin 4. But, in our galaxy, the directors of the different Star Wars movies aren’t using targeting computers; they are continuing to collaborate by doing each other favors in order to make sure there is total continuity between all three installments of the new trilogy. And now, Episode IX director Colin Trevorrow has revealed that he asked Episode VIII director Rian Johnson for one scene.

“There was one little thing. It wasn’t an adjustment,” Trevorrow said on June 15th. Speaking to MTV’s Happy Sad Confused podcast, the Jurassic World director teased at his brief collaboration with the director of the next Star Wars movie. Basically, he asked Johnson, “‘Could you shoot this one extra thing while you’re in this place on this day?’ And he did, which was great.”

But what will this one little thing end up being? A shot of BB-8 stealing Kylo Ren’s lightsaber? R2-D2 hiding Luke’s lightsaber, again? The ghost of Jar Jar Binks?

All kidding aside, fans might never know which scene exactly was added to make the two films match up. But, then again, the truth might eventually come out. Back on May 4 of this year, Rian Johnson explained that he had asked J.J. Abrams to tweak something for the ending of The Force Awakens, which is that R2-D2 come with Rey on the Falcon instead of BB-8. It’s a small detail, but its impact in The Last Jedi might be big. And the same could be true for Trevorrow’s mystery scene.

Star Wars: The Last Jedi, with at least one scene that foreshadows Episode IX, will hit theaters on December 15.

More like this
Entertainment
5.25.2022 11:00 AM
45 years ago, George Lucas peaked with the least Star Wars-esque movie ever
By Ryan Britt
Entertainment
5 hours ago
Obi-Wan Kenobi Episode 1 teases the resurrection of a beloved Jedi
By Mónica Marie Zorrilla
Entertainment
5.27.2022 5:50 AM
'Obi-Wan Kenobi' Episode 2 reveals a surprising new take on Darth Vader
By Dais Johnston
Related Tags
Share: