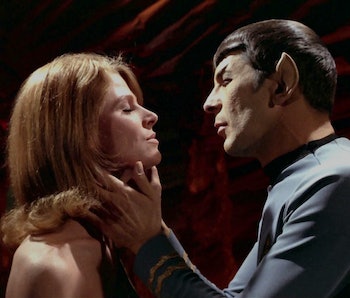 What is the basic different between Star Trek and Star Wars? Many fans will tell you one is real sci-fi while the other is “space fantasy.” Some say it has to do with the “grittiness” of the technology. Others will point to the way the stories are told. But if there’s one defining difference between Star Trek and Star Wars, it’s this: People fire off their phasers a lot in Star Trek but keep their lightsabers sheathed almost all the time in Star Wars.

Not only do characters on Star Trek explicitly have sex, but their sexual relationships create important storylines. The obvious example is the classic original series episode “Amok Time,” in which Spock has to fuck or he will literally die. Many fans consider this to be one of the best episodes of all of Star Trek.

Meanwhile, the original Star Wars was literally born out-of the regressive social norms which typified filmed science fiction prior to Star Trek. George Lucas specifically crafted his fictional universe to be an extension of the 1940s Flash Gordon and Buck Rogers movie serials that he watched as a child. As a result, even if women were brave or assertive in these stories, Star Wars is chaste to the point where it seems like Luke Skywalker might be a virgin in the first film. Indeed, Mark Hamill recently reminded viewers of the Late, Late Show that Star Wars films don’t ever really go there. “Do they ever address adult sexuality in those movies?” The implied answer, of course, is not at all.

In Star Wars Psychology, writers Elizabeth A. Kus and Janina Scarlett point out that only “two out of the first six live action Star Wars films pass the Bechdel Test.” While this doesn’t directly address the sex lives of Jedi Knights, Kus and Scarlett make another important observation: Anakin Skywalker is a wife-beater. In fact, if we stick only to the movies and TV series of these respective franchises, Star Wars sends a very negative message about sex: if you do it, and have kids because of it, you’ll have nothing but problems in your life.

The only characters who we explicitly know have sex in Star Wars movies are Anakin Skywalker and Padme Amidala, and Han Solo and Leia Organa. That is literally it. And the only reason we know this for sure is because there are children involved. In Anakin and Padme’s case, her pregnancy leads Anakin to go insane and become Darth Vader. With Han and Leia, the birth of Ben Solo eventually ends their relationship, and eventually results in Han’s death at the hands of yet another evil member of the Skywalker clan.

This isn’t to say Star Trek sends the most positive messages about having sex to start a family. James Kirk is a deadbeat dad. Worf is a deadbeat dad. Picard hates children, and so on. But, because there are so many more characters who clearly have sex for reasons other than procreation (including Kirk, Worf, and Picard) Star Trek automatically is more mature than Star Wars by default. Riker and Troi’s previous sexual relationship messes up their work relationship in The Next Generation all the time. Same with Dr. Crusher and Captain Picard’s sexy glances.

Trip and T’Pol have sex on Enterprise a lot. Data (a robot!) gets laid in the second episode of The Next Generation. And, that moment goes on to define his character for the rest of the series: when Data is on trial to prove he’s a sentient being in the 2nd season, Picard uses his sexual experiences with Tasha as proof Data is a person. You can’t imagine C-3PO saying he’s “fully functional” even if Gareth Edwards jokes that 3PO and R2-D2 have a “sexual relationship.”

Admittedly, both franchises have been slow on the representation front when it comes to acknowledging the spectrum of sexuality . In 2016, Mark Hamill suggested to fans that Luke could be gay if they wanted him to be. Meanwhile, Star Wars canon officially included its first gay character named Sinjir Rath Velus in the 2016 novel Aftermath. And though Star Trek had a same-sex kiss as far back as the 1995 Deep Space Nine episode “Rejoined,” its first on-screen gay character didn’t show up until the 2016 movie Star Trek Beyond, in which Sulu had a husband (and even that was very underplayed.)

Still, to Hamill’s point about Luke, characters in Star Wars movies might be gay, but we don’t really know because the movies never really address sexuality. Many fans believe Baze Malbus and Chirrut Imwe are a gay couple in Rogue One. Others ship Finn/Poe from The Force Awakens. While all of this is great, none of it is made explicit in the films. Star Wars sex only occurs in the mind of the super-fan’s head canon.

But since it’s original run, Star Trek has put sex and overt sexuality front and center in its storylines. This will continue on Star Trek: Discovery, Anthony Rapps’s new character Lt. Harris is gay and will have boyfriend played by Wilson Cruz.

This isn’t to say Star Trek is better because we know more about the sex lives of its characters than we do about characters in Star Wars. But it does make each of these franchises very, very different kinds of narratives. Both present fantasies that occur in outer space. Both have heroes and villains. Both have heart-pounding action. But because the protagonists of Star Trek have clearly explored sex lives, they’ll always feel a little bit more grown-up than the heroes of Star Wars. But then again, maybe that’s the point.