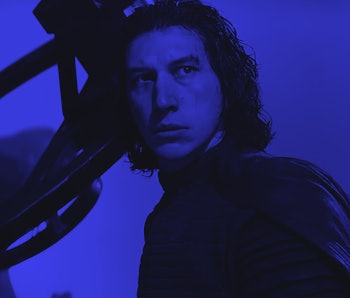 While it’s been more than a month since the release of Star Wars: The Rise of Skywalker, fans are still poring over every detail of the film. In a pivotal scene, General Leia Organa reaches out to Kylo Ren with the Force while he’s fighting Rey. Though she only whispers his name, it seems to draw Kylo back from the brink of darkness. A startling fan theory suggests Leia may have also played a key role in saving Rey as well, while putting to rest one of Episode IX’s biggest mysteries.

In the final showdown between Rey, Ben Solo and the resurrected Emperor Palpatine, Sheev mercilessly tosses the newly redeemed Ben into a deep hole, leaving Rey with two lightsabers and the encouraging voices of long-dead Jedi at her disposal. Physically and mentally spent, Rey collapses after defeating Palpatine and dies.

Ben then crawls out of the hole, miraculously still alive, to save Rey with his Force healing abilities. After Rey returns to the land of the living, she kisses Ben before he dies and his body disappears for good, presumably becoming one with the Force. At least, that’s what The Rise of Skywalker would have us believe.

Reddit user IGotADashCam theorizes that Ben/Kylo didn't save Rey at all. Instead, it was Leia working through her son – that’s why he disappears so quickly after healing Rey. Wait, what? Yeah, it’s a bit complicated, but the gist is that Kylo did actually die when Palpatine threw him into the hole. After all, he did smash into a rock on his way down.

At this point in the movie, Leia isn’t dead, only comatose. Knowing Kylo was already a goner by then, she uses the last of her Force power to project an image of Kylo so as not to freak Rey out and save her. The idea stems from the scene where Luke Skywalker Force projects himself to Kylo in The Last Jedi, altering his projection to appear as a younger version of himself. That means Leia could alter her appearance as well, right? Here’s what the theorist wrote about how it all went down:

“So Leia Force projects herself as Ben and uses her life force to save Rey. Even going as far as to kiss Rey to convince her it's Ben. It's why when Ben disappeared, so did Leia.”

As far-fetched as it might seem, the theory makes a ton of sense. It's also in line with a previous Episode IX theory that said Leia was behind her son's vision of Han, using her waning strength to conjure him in a Force projection. While it’s a bit disturbing to think Rey kissed Leia’s projection, it just might explain why Kylo doesn’t say anything before or after Rey is resurrected, because Leia was “worried she would get caught.”

The Rise of Skywalker theory also expounds upon the reason why Leia’s body disappeared at the same time Kylo’s did. Sure, one could argue that Leia was waiting around for her son's redemption, but the theory offers a clever workaround the puzzling moment. While we may never learn the true reason behind this specific scene, this theory offers a modicum of closure.

Star Wars: The Rise of Skywalker is currently playing in theaters.