'Rick and Morty' Season 5: Sarah Chalke on the future of Space Beth

“I personally hope she sticks around.” 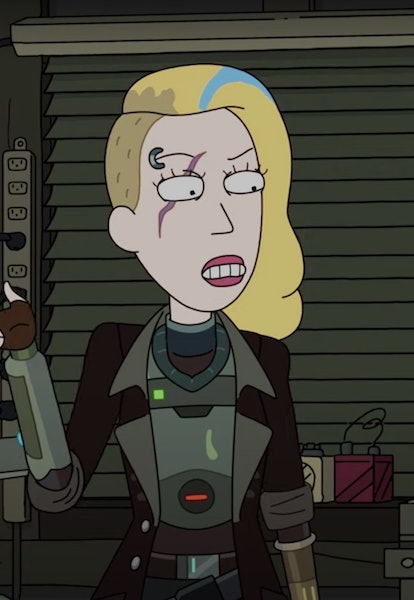 Sarah Chalke is used to recording her lines for Rick and Morty from the comfort of a professional studio.

But as Covid-19 restrictions began in March, she was faced with making a blanket fort. Suddenly, in order to record her lines as Beth on the brilliantly subversive sci-fi cartoon, Chalke was stacking pillows in her home in Canada.

“I would take all the duvets and all of the pillows and put them on my son's lower bunk bed to pad the whole thing,” she tells Inverse. “Then I’d take a stack of poker chips and Harry Potter books to make a stand for the HypeMiC they sent me.”

Chalke realized she needed a permanent set-up after a friend who was a doctor told her, "This is going to be real, it's going to last a while, and it's going to get pretty intense.” She bought a Vocal Booth — a freestanding, enclosed booth designed for the voiceover industry.

If the way fans reacted to her new character — Space Beth — is any indication, the investment was worth it.

Space Beth made her debut in May's Season 4 finale, “Star Mort Rickturn of the Jerri.” The episode provided closure on a tense Season 3 scene when Rick offers to clone Beth, giving her a chance to explore the universe while her clone stayed behind with the family.

Audiences didn't know if Beth took her scientist Dad up on his offer — until the Season 4 finale, which aired in late May. When Space Beth shows up on Earth, to kill her dad, Rick, we were still left to wonder is she the clone? Or is she the original? Ultimately, we never learned which Beth is the real one in that Season 4 finale.

The episode is full of returning side characters like Dr. Wong and Birdperson, but the scene-stealing star is definitely Space Beth. Out of more than 2,000 votes on a ballot of 40 new streaming characters in 2020, Inverse readers chose Space Beth among the year's ten best debuts.

"I love it!” Chalke says at the news. “To tweak the character and play a different version was so much fun to do because there are subtle differences between the two of them.”

Quite simply: Beth is a loving mother who drinks too much somewhat often because she felt unfulfilled. Space Beth, on the other hand, is a badass.

Chalke recorded lines for each Beth in different sessions to help stay in the right mindset: “We went through the episode and did all of Beth, and then all of Space Beth,” she says.

Chalke says she also did not know the outcome of the extended story while recording. She still doesn't know which Beth -- the clone or the real thing -- is in the Season 4 finale. “I didn’t know as we went along — and still don’t — who’s the clone and who’s not,” she says. “I love that they decided to leave it on a note where both Beths don’t really care which one is the clone.”

We’re led to believe that the show will go on in Season 5 and beyond with two Beths, which would mark a major deviation for a sci-fi series that so often returns to the mean from its wonderfully ridiculous narrative detours.

Show co-creator Dan Harmon confirmed in a November interview that “Space Beth was not a one-off character.” When asked about the future of the character, Chalke is firm.

“Dan and Justin are allowed to talk about future episodes — I am not!” she says, laughing. “I’m watching every word out of my mouth to make sure I don’t spoil anything! If she sticks around, that’s fun for me and a really interesting dynamic for Beth to play off of. I personally hope she sticks around, but we’ll see.”

What does Chalke hope is next for her character? More episodes like “The ABC’s of Beth,” where we learn more about her bizarre childhood.

“I’d love to see a little more insight into her as a kid,” Chalke says. “I loved hearing all of the things she used to do, like force Rick to make her mind control hair clips so people would like her. Just seeing her behave so much like Rick at such a young age would be really fun.”