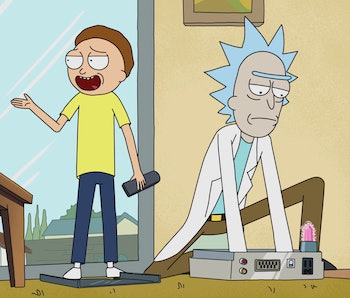 For those of us used to watching and rewatching old Rick and Morty episodes on Hulu, the question remains: When will Season 4 be available to stream? The answer depends on exactly when Season 4 ends, and now that Adult Swim has confirmed Season 4, Part 2 will begin airing in early May, we now have a better idea.

The first five episodes of Rick and Morty Season 4 kicked off on Sunday, November 10, 2019 and the mid-season finale aired on December 15. Series co-creator Justin Roiland confirmed at the time that five more episodes were in development, but it wasn't until the Part 2 trailer was released on April 1, 2020 that we knew that new episodes would begin airing May 3.

The original Season 4 trailer said “half the season you deserve, all the season we could handle,” which meant those five episodes were all Adult Swim could handle … in 2019. Assuming Part 2 doesn't have any weeks off, then the season finale should air on Sunday, May 31.

What would that mean for the Rick and Morty Season 4 Hulu release date?

Seasons 2 and 3 concluded in October of 2015 and 2017, respectively, and those seasons weren’t added to Hulu until late June of the following years, putting the prospective wait time at around 8 months. Given the shifting nature of streaming media, however, fans hopefully won't have to wait nearly as long for Season 4.

During WarnerMedia’s formal HBO Max unveiling on October 29, 2020, the company announced that every episode of Rick and Morty ever — past, present, and future — would be available to stream on Hulu and HBO Max. The Hollywood Reporter revealed shortly after the announcement that new episodes “will now be available at the same time they land on HBO Max, about five months after the finales.”

It’s possible that WarnerMedia has plans for Rick and Morty Season 4 to be a launch title for the new HBO Max streaming platform. As far as anybody knows, HBO Max is still supposed to launch in May 2020, but HBO has yet to confirm any kind of launch date. It's possible that the current pandemic situation has led to delays for the streaming platform's launch, but given how many potential viewers are stuck indoors anyway, the best thing HBO can do is fast-track the launch of a new streaming platform.

Assuming the Rick and Morty Season 4 finale does air on May 31, then the earliest it will land on HBO Max and Hulu will be on October 31, 2020 — Halloween Day!