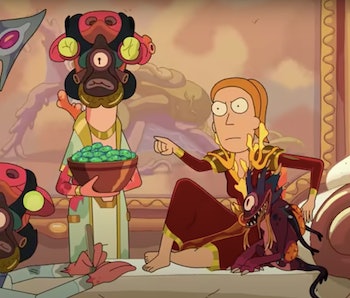 Rick and Morty hit a high point when Summer was a queen in the post-apocalyptic wasteland of an early Season 3 episode, and the seventh episode in Season 4 hit a similar peak by making Summer the Supreme Empress of Glorzo. In "Promortyus," Summer is yet again an afterthought and verbal punching bag to both Rick and Morty, but the way she carelessly shrugs it off to become the most important person in the room is a total delight.

Rick might have a genius IQ, but in a lot of situations, he can be so much dumber than his teenage granddaughter.

A clear riff on the movie Prometheus (which takes place in the same cinematic universe as the Alien movies), the main plot hook in "Promortyus" involves a facehugger alien species. Once an egg bursts, the tentacled creature will latch onto a person's face and lay an egg in their stomach. 30 minutes later, they explode and give birth to a new egg. It's a vicious cycle.

"All you do is live half an hour, shit eggs, and die?" Summer says midway during the episode in a flashback to her story. "Who's up for changing things around here?"

Whenever Summer gets a major role in any episode, she becomes an agent of change that fractures the status quo in important ways, challenging our lofty perception of Morty and, even moreso, Rick.

We have such high expectations for our title characters, and the first half of the episode really delivers in terms of raw sci-fi action entertainment — but it's all in the effort of eventually subverting our desires in ways that get downright perverse. And it has everything to do with the big twist that Summer was with them on this adventure the whole time. They just forgot about her.

The first half of the episode is a glorious and well-animated spectacle. After a fortunate accident sets them free, Rick and Morty shoot their way out of this industrialized alien society of facehuggers, using all sorts of awesome gadgets Rick had built into his car. There's even a fair bit of Star Wars parodying going on as Morty enters a turret on the bottom of the car to shoot at enemies. Then there's a pair of skyscrapers that stand directly in their path, and they drift respectfully past them rather than recreate 9/11. Bombing a full shipyard, however, is fair game when they recreate Pearl Harbor instead.

The whole sequence goes from exciting to unsettling to hilarious. It winds up feeling like a thoughtful but ridiculous meditation on how insane the 21st century has become. "This episode is about living in the freefall of the 21st Century, and Ass-Eggs," tweeted the episode's writer, Jeff Loveness.

We're meant to respect Rick and Morty's tasteful decision to remake the American atrocity that's 80 years old instead of 20. This is a brilliant bit of very risky comedy that proves the Rick and Morty writers' room really knows their audience.

The millions of millennials that watch Rick and Morty remember 9/11 all too well, whereas Pearl Harbor happened so long ago that so many potential viewers have little to no emotional connection to the event, and it's therefore fair game for a joke. Particularly given our current, borderline apocalyptic levels of isolation amidst pandemic, Rick and Morty's comedic nihilism and capacity to poke fun at insane violence feels more timely than ever. The more we think about it seriously, however, the more we're meant to realize that it's pretty fucked up how Morty and Rick careen through the multiverse, leaving a swath of destruction in their wake. How many people has Rick killed in his life, really? Does it even matter?

That's not even the worst thing they do in this episode.

After their epic escape, they chat over breakfast while Jerry confesses a honey hobby, and they realize they abandoned Summer in the society of facehuggers. That's when the duo go from heroes to fools.

This is what's known as a dick move.

But in an extended flashback, we learn that Morty and Rick immediately messed around with some glowing alien eggs whereas Summer was more suspicious. After a pair of Glorvo facehuggers possessed Rick and Morty, the only thing that saved Summer from suffering a similar fate was her new "Thing," which is leaving a toothpick in her mouth at all times. It killed any facehugger that tried to grab her.

On the fly, she's quickly able to navigate this weird society to become the supreme empress, all by pitching progress rather than procreation as the focus of this society. So they build up technology rather than further the cycle of death and rebirth. It's surprisingly nuanced coming from Summer's female perspective, especially for an episode that also gives us Morty-Rick incest from one step removed by having their facehuggers makeout.

So it becomes Summer rather than Rick that saves the day, ultimately, helping to prevent these facehuggers from spreading their domain to Earth. She constantly proves herself the most interesting, fun, and resourceful person in the room — and I sincerely wish she'd show up for more adventures.