"I think people wanted to look the other way." 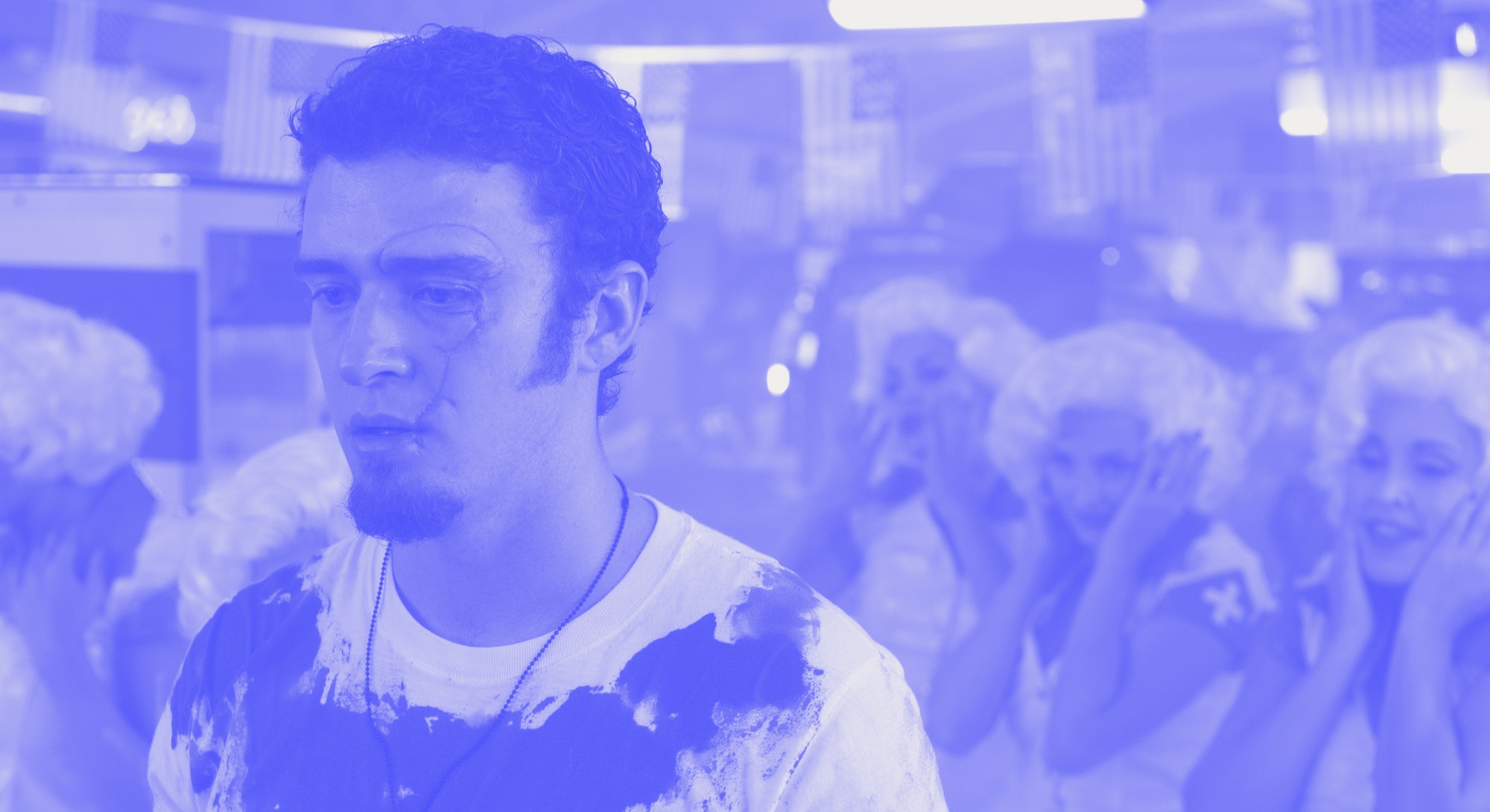 Fifteen years after Southland Tales was booed out of the Cannes Film Festival, director Richard Kelly tells Inverse he embraces the chorus of jeers. At least that way, he isn’t forgotten.

“I would rather get booed because I’m in this for the long haul,” he says. “It would be nice to have success at the outset. I’ve never had out of the gate success. But I’m grateful for getting rediscovered and appreciated because it’s a testament to the longevity of a project.”

In 2006, five years after his debut feature Donnie Darko found a rabid cult audience on home video, Kelly released Southland Tales as his sophomore effort. A treatise on the ties that bind politics to pornography, Keyll’s sci-fi dystopia takes place in a near future United States in the aftermath of World War III. In California, an amnesiac Hollywood actor and his girlfriend, a former adult film star, write a screenplay that contains the prophecy to the end of the world.

An ensemble of mid-aughts icons including Sarah Michelle Gellar, Seann William Scott, Justin Timberlake, and a very weird Dwayne Johnson lead a film so ambitious and incomprehensible it’s as if aliens were tasked with taking the Palm d’Or instead of the planet.

“We could never have predicted Trump,” Kelly says. When Southland Tales was shooting on a sweltering Venice Beach and the Santa Monica Pier, The Apprentice was in its fourth season averaging 11.01 million viewers on NBC. Trump was the “You’re fired!” guy, not the President.

“We were making a reflection of 2005. It was about the anxiety of post-9/11, the War on Terror,” says Kelly. “I think the pushback we received at Cannes was a lot of people feeling like, There’s no way things could ever get this crazy. I think people just wanted to look the other way.”

In an interview with Inverse, Kelly looks back on Southland Tales, working with a large ensemble cast including an experimental Dwayne Johnson, that unforgettable dance number, and hiring a Dungeons & Dragons consultant for a most elaborate story metaphor. This critical and commercial disaster isn’t just beloved by its director years later, but perhaps more prescient, more ominous, and just maybe, a lot better than we realized.

Southland Tales villainizes the Republican party. How do you think the movie holds up 15 years later with Trump still fresh in our minds?

We were making a reflection of 2005. While we were shooting, Katrina was happening in New Orleans. The anxiety of 9/11 and the War on Terror, surveillance, all of these oppressive forces we were feeling mixed with this insane pop-culture train. Tabloid stars, reality television, energy drinks, Paris Hilton, the explosion of MySpace and pornography. All this stuff was swirling around and we were doing this big collage about all of that.

But we never predicted Trump. If I got in a time machine and told myself Donald Trump would be president, I would never believe it. That would have been insane. In a weird way, this “bonkers pop” quality of the film does feel like it anticipated Trump. But we could never have imagined we would ever arrive in such an absurd place. We were really reacting to a world that existed 15 years ago.

How did audiences respond to Southland Tales’ political satire in 2006?

I think, at the time, people were exhausted with this. It was a conservative time beyond who was in the White House. Even in Hollywood, it was conservative. 2006 was the year the Academy would not give Brokeback Mountain Best Picture. A couple years earlier, Michael Moore was booed at the Oscars for speaking out against the Iraq War. He was booed.

We were looking at several more years of Bush, we were years away from Obama’s election. It was a very specific time after Katrina, and I think people were in a really conservative mindset not wanting to deal with any of this stuff. It was a very challenging time.

Believe it or not, given all that happened in the horror of 2020, I do think we're getting to a better place as a culture. I really do. I think a lot of progress has been made. I see a lot of the younger generation has been politicized and radicalized, where they are trying to change the world for the better. I believe that. We're seeing a whole new generation that is more tolerant and more progressive and accepting of people who are different. [They are] more compassionate. I feel like we are pushing in the right direction, despite all the chaos in the madness. There is a lot that is moving in the right direction in the world.

In Southland Tales, you cast actors against type. You have Dwayne Johnson as a nervous screenwriter, Amy Poehler as a violent political activist, Kevin Smith as an army general. Do you think this gamble paid off in your movie?

Yes. The common denominator of every actor in this cast is they can do comedy. And not everyone can do that, but they all can. They can do improv and think on their feet. I had a lot of cast members from Saturday Night Live, but even the actors who weren’t, like Sean, Dwayne, Justin, they maybe hosted SNL. They all tried new things and took risks. That’s the funnest experience you can have with an actor, letting them explore a new place or uncover some new part of their talent or personality.

I was grateful. Being a movie star or celebrity, it’s a daunting thing to maintain. You feel you can’t take risks. You do what people expect from you. But everyone I worked with on this movie was excited to break out into a new place.

Speaking of Dwayne Johnson, you got him after his wrestling career but before he exploded into a bonafide movie star. In Southland Tales he plays an unusual character with a nervous tic. What was it like directing a pre-Fast & Furious Dwayne Johnson?

It was great. There was a real design to what we were doing. We had a lot of long talks about [his character] Jericho Cane — Ralph Meeker in Kiss Me Deadly was an inspiration — but when we have schizophrenic breaks or dealing with the amnesia, we would have these little panic attacks. It was a lot of very specific direction, and Dwayne is a physical performer. He’s this big, gigantic presence. He can do all these very precise movements with his body and even his face. I saw him as this wonderful canvas, his body was an instrument we could play with.

I can’t remember when he did it for the first time, but when he started doing the thing with his fingers, I realized it was going to be a motif. I said to him, “We’re going to use that as a signifier,” a symbol of the two identities colliding. Jericho Cane colliding with Boxer Santeros.

There’s a big Dungeons & Dragons metaphor late in the movie. Are you a D&D fan?

I’ve never played Dungeons & Dragons, but I was a witness. My older brother played it all the time. As a kid, I would come up to our rec room at our house in Richmond, Virginia, and my brother and his friends would be playing. I was an observer, watching the game played. I think that’s where it came from.

It’s interesting you bring that up because Dungeons & Dragons has a bigger role in the story. You see more in the Cannes Cut, it’s barely in the theatrical cut at all. We actually had a Dungeons & Dragons consultant on set, analyzing the more esoteric stuff and giving us a lot of interpretive material to the story. If we do succeed in making a bigger, extended version, Dungeons & Dragons has a lot to do with it. It has to do with the architecture of the operating system with respect to the story. I could go into more detail but it might spoil things I'm working on for the future. I’m glad that you picked up on that because it was a conscious decision.

That song was huge in 2005. It was popular when we were making the film, and I became obsessed. I had this idea of Justin lip-synching to it. The lyrics of the song play into the Iraq War, and using that interpretation with his character being the heartbeat of the whole film as the narrator, and him breaking the fourth wall looking straight into the lens.

I fought hard, begged, and pleaded with the producers to let us shoot it. I brought in Marguerite Derricks, our brilliant choreographer, and we brought in the dancers who worked for a month, two months beforehand. And then we were on the Santa Monica Pier. We had the arcade, and four hours [to shoot]. Justin was there for one long day. We just went for it. It was exhilarating.

It would be nice to have success at the outset. It would make things a lot easier. It’s frustrating because it takes longer to get movies made, it slows everything down. But I’m grateful for [the movie] getting discovered and appreciated further down the road. It would be nice for something to hit out of the gate. I look forward to having that happen to me one day.

Southland Tales is available now on Blu-ray from Arrow Video.