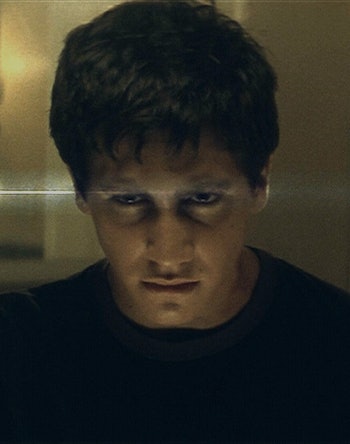 For those of us who had to navigate the innumerable errors of adolescence during the early-to-mid ‘00s, Donnie Darko dredges up a lot of feelings. Though the 2001 sci-fi flick bombed at the box office, it’s kept a steady cult following over the years. There’s an enduring appeal to the time-travel drama, despite the fact that the movies’ attempt at physics is seriously flawed, according to actual scientists.

If you ask three people what Donnie Darko is about, you’ll probably get three very different responses. It was the Bush administration and a confusing time for everyone, especially us nascent teens trying to navigate hormones and Green Day.

From what fans can mostly agree on, here’s the story: Donnie Darko is an angsty high school teen living in Middlesex, Virginia, who is almost killed when a jet engine randomly falls through the roof of his home. He’s then visited by a large man in a rabbit suit named “Frank,” who tells Donnie that the world — his, specifically — will end in 28 days. Donnie spends the rest of the film trying to figure out how to travel back in time in order to undo some tragic events and may or may not have hallucinated. After 16 years, the plot still doesn’t make that much sense, but then again, neither did most of 2001 to 2009.

We asked actual physicists to tell us what Donnie Darko was trying to accomplish, scientifically speaking.

Part of the allure of Donnie Darko — besides the overwhelming angst and that “Mad World” cover — is its half-assed explanation of time-travel. Throughout the movie, Donnie tries to piece together information about wormholes and what the film calls “tangent universes.” It’s heavily implied that the jet engine — which almost kills Donnie in the beginning of the movie — somehow opened a wormhole to another universe. This idea actually does tap into real physics concepts, albeit with some creative freedom.

“Donnie Darko, like many works of fiction, takes two ideas from physics about ‘parallel universes” and combines them,” Sean Bartz, a physicist at Macalester College in Minneapolis, tells Inverse. “The movie also creates the idea of a tangent universe, which to me implies a parallel universe that contacts ours at a single point in space-time.”

While Donnie Darko almost gets the concept of alternate histories correct, it falls a bit short, which is of course forgivable. In the many-worlds interpretation of quantum mechanics, “alternative histories” are real. In the movie, this idea of alternative histories plays out in the twist at the end, when we’re not sure which version of reality we’re seeing — one in which Donnie is alive, or another in which he’s dead.

“The movie suggests two alternative histories: one where Donnie is killed by the airplane engine, and one where he is not, and one where he is not killed and [Donnie’s girlfriend] Gretchen dies instead,” Bartz explains. “The existence of the alternate realities may be consistent with the many-worlds interpretation, but Donnie experiencing both of them is not.”

Donnie becomes curious about how the jet engine that nearly murked him could have opened a portal into another dimension. At one point, he even asks his science teacher about the concept of wormholes and how they might relate to time-travel. While a wormhole has never actually been observed, in the Donnie Darko universe(s), anything is possible, so sure, we’ll allow it.

“A wormhole is a hypothetical shortcut between two different regions of space-time,” Leo Stein, a physicist at Caltech, tells Inverse. “This could either be between two ‘different’ universes, or two places within the same universe. The same word is used for both distinct concepts in the literature. If it’s within the same universe, then that universe’s topology becomes tricky. You can think of the spacetime as having ‘handles’.”

Even if wormholes are more than just hypothetical, a jet engine wouldn’t open one up, Stein explains.

“One of the difficulties is that the math of wormholes require something called ‘exotic’ matter, which is basically just matter whose energy density and pressure behave in a way that we haven’t observed,” he says. “Jet engines are made of ordinary, not exotic, matter. So where did that exotic matter come from? What was the mechanism for a crashing jet engine to curve spacetime so much that it created a wormhole? How much do we want to suspend our disbelief?”

Does the doomsday bunny Frank play into the physics of Donnie Darko, or is he just a hallucination?

“I have no idea,” Stein says. Frankly, this is something both physicists and non-physicists can agree on.

Regardless of who Frank was or what he was trying to do, the bunny man delivered what’s inarguably the best line in the movie: “Why are you wearing that stupid man suit?” Classic.

If this low-budget movie that no one saw is so deeply flawed, why do teens and angsty semi-adults seem to love it so much, even after all these years? Certainly it’s not the for the educational value or blockbuster appeal.

According to Alex Zalben, managing editor at TV Guide, the film taps into an adolescent variant of vulnerability. It’s a movie that understands you at a time you’re struggling to understand yourself and what the hell is going on in the world around you.

“I’d say the simple reason Donnie Darko is still a favorite is because it captures the ‘chosen one’ storyline of a Star Wars or Harry Potter, but filtered through a moody, teen, almost goth tone,” Zalben says. “So unlike a huge blockbuster, YOU — yes you, you sad misunderstood boy — could be Donnie Darko. It also helps that it’s a mystery box, the sort of movie with no easy answers that rewards repeat viewing, and discussion with others.”

Here’s to 16 years of this weird, wonderful movie and the teens at heart who’ll always love it, no matter how melodramatic.