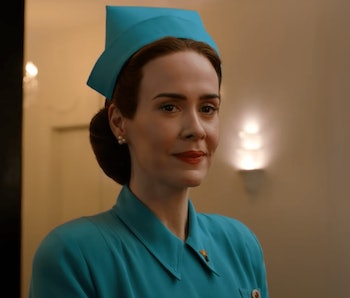 Ratched is fan fiction. Like most fan fiction, Ryan Murphy's latest series for Netflix takes the world and characters of an existing work as a jumping-off point for a new story with little overlap. In Ratched's case, the only holdover from its source material, One Flew Over the Cuckoo's Nest, is the titular Nurse Ratched, who carries the plot of the series while it pulls out every trick in the Ryan Murphy repertoire, and then some.

Ratched seems to be an amalgam of every visual language trick learned over the course of this series, and the result is a series that looks a lot more interesting than it actually is. There are stark color shifts, Carrie-esque split screens, and color grading so saturated it looks less like a prestige drama and more like an Old Hollywood Technicolor film.

It's these stylistic elements where Ratched shines. The production design of the clinical, teal-tinged mental asylum and costume design of Mildred Ratched's late '40s ensembles make the series feel like a fever dream, and does a lot of heavy lifting for the hardly believable story.

However, Ratched's uneasy relationship with realism also reduces its mentally ill patients to caricatures. Every patient is either treated as a plot device or set dressing, and on a number of occasions lapse into violent outbursts that only perpetuate the kinds of stigma Hollywood has slowly started to debunk.

Ratched consistently conflates "thrilling" with "difficult to watch," and certain scenes — some integral to the plot, some purely gratuitous — demand to be watched peeking through hands over the eyes. It's understandable the series would want to depict the horrors of mental health care in its infancy, but it plays off as more exploitative than informative.

Mildred Ratched, though the strict antagonist in Cuckoo's Nest, often plays the voice of reason in her workplace. Sarah Paulson expertly portrays a new evolution of the anti-hero, someone whose priorities are not at all in the correct order, but who will put everything at stake for the ones she loves.

Mildred is conniving, manipulative, and often downright cruel, but Paulson's cool confidence means you'll root for her all the way despite yourself. Her foes are interesting characters in their own right: well-meaning Dr. Hanover, inscrutable head nurse Nurse Bucket, smarmy politician Governor Wilburn. The characters with dimension are interesting, it's just a shame they make up such a small percentage of the overall picture.

Whether it's because of purposeful suspenseful writing or the fact Netflix has already green-lit a second season, the ending is the furthest thing from satisfying. Mildred has so many irons in the fire throughout the episodes, be it reform at the hospital, her personal goals, her love life, and politics, that only so many can get solved in eight episodes.

Still, by the end of it, you'll feel like you've undergone the experimental hypnosis therapy administered by Dr. Hanover: dazed, overwhelmed, and with a sense of returning to reality. A lot occurs, not all of it good storytelling, but thought into presentation shines in every second. It's a Ryan Murphy show, so don't think too hard about the plot, just enjoy the pretty colors.

More like this
Entertainment
Jan. 18, 2023
Everything you need to know about That ‘90s Show on Netflix
By Claire Fox
Entertainment
Jan. 26, 2023
Wolf Pack is proof that supernatural teen shows can still be bad
By Dais Johnston
Entertainment
Jan. 25, 2023
Poker Face is Rian Johnson’s Columbo for the superhero era
By Hoai-Tran Bui
LEARN SOMETHING NEW EVERY DAY.
Related Tags
Share: