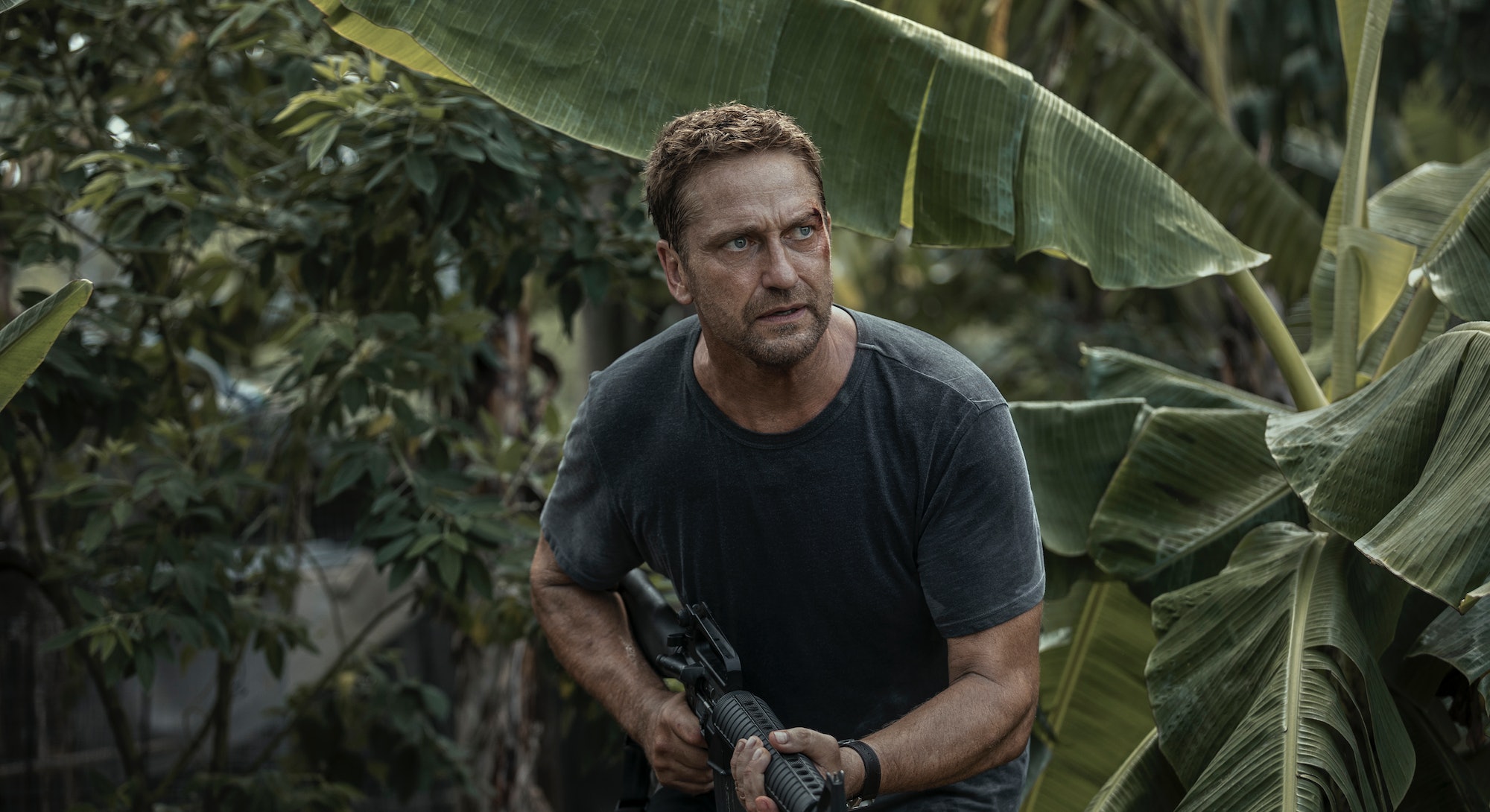 Airport novels are a fascinating concept when you think about it.

Such books, usually espionage thrillers by James Patterson or romances by Danielle Steele, come with low artistic expectations and high entertainment value. The stock characters and formulaic plots are wholly engineered to distract from the screaming brat three rows behind. Everything in these pages is functional and nothing is ambitious. In 2007, Libby Brooks wrote off airport books for The Guardian: “Your plane may not have left the runway, but at least you're already on page 149.”

Leading man Gerard Butler epitomizes cinema’s equivalent of an airport thriller, partaking in modestly entertaining action fare that do well to pass the time but fall short of being memorable. (A challenge: Ask a normal person to sort the Has Fallen films in chronological order.) But after an admirable high with the 2020 disaster pic Greenland, Butler struggles to make landfall with the plane-ly titled Plane, a January release from Lionsgate by French director Jean-François Richet.

In this movie, scripted by Charles Cumming and J.P. Davis (the former a spy novelist, precisely a genre that can fill a Hudson News shelf), Butler stars as Brodie, a pilot with a short fuse who spends New Year’s Eve flying a sparsely-seated flight from Singapore. What should be an easy ride gets complicated by two things: 1) The presence of an arrested felon (played by Luke Cage’s Mike Colter) as a last-minute passenger, and 2) a freak storm that knocks out the power, forcing a harsh landing on a remote Philippine island. An island that just so happens to be ruled by armed rebels who make their fortune off ransoming stranded travelers.

Despite a workable, if drowsy premise — one that plays off middle America’s fears of travel and brown foreigners with guns — Plane is all turbulence with little thrills. It’s a rote piece one can feasibly watch with half-distracted eyes. Its schmaltzy elements can maybe win some emotional investment, but precious little technical and artistic spectacle forces Plane on a downward trajectory. Even its impulsively watchable take-off sequence and a fatal flight through a lightning storm never lead to anything more. It’s damning when the best part of any movie is limited to its first 20 minutes, and — almost literally — Plane never really takes off.

Even Butler appears on autopilot, playing the same hunky, accented Scot with a visible gym routine you’ve seen before. Unlike similarly distraught pilots of cinema — like Denzel Washington’s cocaine-addicted, womanizing lead in Robert Zemeckis’ Flight — Brodie’s family woes foster some sympathy, but more awkwardly, brute force takes over when the bullets begin to ricochet. Butler is a long, long way from his glory days in 300, arguably the last time Hollywood’s most bankable Scotsman did anything remotely transgressive.

Co-star Mike Colter is similarly wasted as a stiff criminal disinterested in making sure the worried passengers, and by extension we the audience, know his humanity. While Colter’s work in Marvel’s Luke Cage felt cold and impersonal more times than not, his more recent performances as devout Catholic David Acosta in Evil — one of few network procedurals that can still warrant must-watch buzz in the streaming age — is proof of talent in the Rutgers MFA alum. Sadly, Plane restricts Colter to glances and grunts, and when paired with Butler, the movie never makes the dramatic and narrative meal it could have in its tale of two strangers who need to trust each other.

It’s not that Plane is bad, it’s just so nauseatingly functional that you have to question the circumstances that led you to watch Plane at all. The only logical conclusion is that you’re on a plane and you’ve got an hour and 47 minutes to kill. Even so: Really? You’re watching this? Was The Menu not available on your United flight?

Underwritten but overly-plotted, Plane has no priority and no destination other than hurrying to the next vanilla-made set piece. None of its characters ever find any dimension beyond the flat printer page of the screenplay, and its pallid representation of Filipinos is offensive if only because of how much they feel like inauthentic, carbon copies of any other ethnic terrorist. Even with a sweaty Gerard Butler in control, Plane offers no mileage in this journey to nowhere. Take it from a film critic: Read a book instead.

Plane will fly into theaters on January 13.