“We all do things we’d rather forget.” 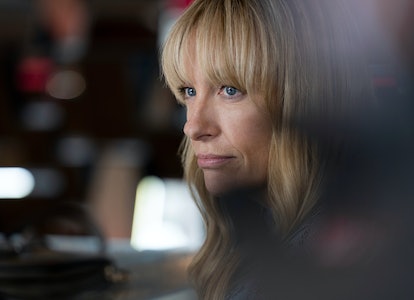 Can you remember the last time you literally gasped at an episode of television? Was it when Arya stabbed the Night King, or when Kendall Roy betrayed his father in Succession, or even Lost’s “Not Penny’s Boat” moment? In the age of streaming TV, when television is no longer a communal activity but a singular one, these gasp-worthy moments are fewer and farther between.

But even though Netflix spearheaded the rise of streaming television, it brings back the gasp-worthy moment is back in a big way with the new drama thriller series Pieces of Her.

Created by Charlotte Stoudt, Pieces of Her begins as a vehicle for Toni Collette playing yet another long-suffering mom, just like she did in The Sixth Sense and Hereditary. But while her characters Lynn and Annie had children hiding supernatural secrets, in Pieces of Her, Collette’s Laura Oliver is the one hiding a huge part of her life from her daughter, Andy (Bella Heathcote).

Based on Karin Slaughter’s book, Pieces of Her is similar to other thriller adaptations, like Gone Girl and Big Little Lies, with a main character whose life seems idyllic. Laura is a well-respected speech therapist in the little coastal town of Belle Isle, Georgia (a town that looks eerily like Toni Collette and co-star Bella Heathcote’s native Australia). Her daughter, Andy, is living in her guesthouse while working as a 911 dispatcher after a failed stint as an artist. All seems fine and dandy until a random act of violence seems to flip a switch in Laura when Andy is threatened.

While the trailer makes it look like Laura’s secret is that she was basically John Wick in a previous life, the truth is actually far more nefarious — she was more like Patty Hearst. In a series of flashbacks, we see the trauma that has rippled through Laura’s life, including her complicated relationship with her father, played by Terry O’Quinn in a role equally mysterious as John Locke in Lost.

These flashbacks ultimately become the most fascinating part of the series, weaving together progressive politics, toxic relationships, shady business dealings, and Joe Dempsie (Gendry from Game of Thrones). Young Laura and her siblings paint a tense relationship that’s more like something out of Succession than an intrigue thriller.

There really aren’t shows like Pieces of Her anymore, but there certainly are books like it. Thank goodness this series found a home on Netflix because watching it has the same feeling as staying up past your bedtime to finish a book you just cannot put down. Honestly, if I had to watch this show with only one episode a week, I would go mad from the sheer amount of theorizing and speculation.

Pieces of Her isn’t a whodunit but more of a who-is-she. Andy doesn’t even know her mother, and as she discovers more about her, she learns new things about her own childhood, for better and for worse. Like all good thrillers, the slow burn and tense conversation build up to a climax that reminded me of watching a classic suspense film, like Cape Fear or Double Jeopardy.

But just when you think it’s all over, the show kicks you on the way out with a single twist that changes everything we thought we knew about Laura. That’s the third gasp-worthy moment, describing the second one would spoil too much.

However, a Netflix release usually has one big drawback: spoilers. This is a series that devours the viewer, rather than waiting to be devoured. It’s best when you know the least about the show. If the words “Toni Collette” and “action-drama-thriller” aren’t enough to sell you on Pieces of Her, then trust me when I say that no matter where you think this show is going, it will find a way to shock you.

Probably the only part of this series that is not surprising is the depth and consistency of Toni Collette’s acting. With a role like Laura Oliver, there’s more meat and backstory to slowly unravel before our very eyes, and by the last episode, the Laura of the premiere is basically another person.

Those gasp-worthy moments may be its selling points, but Laura’s subtle transformation is what makes Pieces of Her go from good to great.

Pieces of Her premieres March 4 on Netflix.