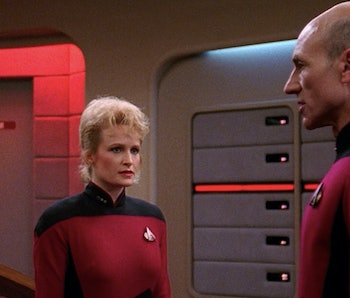 Last week, Star Trek: The Next Generation celebrated a 30-year-milestone. On June 18, 1990, Jean-Luc Picard was kidnapped and transformed into Locutus of Borg in the mega-famous TNG cliffhanger, "The Best of Both Worlds Part 1." But, what you probably don't remember about that episode is that most of the storyline isn't about Picard at all. Instead, up until the Borg crash the party, "The Best of Both Worlds Part 1" is mostly a workplace drama about Riker's (possible) new replacement, Lt. Commander Shelby.

In real-deal Star Trek canon, we haven't seen Shelby since "The Best of Both Worlds." But if the writers of Picard Season 2 had any guts, they'd bring her back. Or to put it another way, after all this time, am I the only one asking: What happened to Shelby?

"The Best of Both Worlds Part 1," was the season finale of Star Trek: The Next Generation Season 3, and one of the greatest fake-outs in all of Trek history. For an entire summer, fans had to worry whether Patrick Stewart would return as Picard for Season 4, and whether not Riker meant business when he said "Mr. Worf, fire." This is hard to imagine, because the contemporary subtext of Picard the character was essentially established by this episode and its sequel. In other words, Picard does not become the Picard we know until after his Borg assimilation. Therefore, the idea that The Next Generation could continue without him, or that Picard would remain a Borg drone, and perhaps have come back as a reoccurring villain are fan theories that literally only live in the summer of 1990.

None of these things were ever really on the table for the producers and writers of TNG, but, as a 9-year-old who was theorizing during the summer, I can tell you, we've all collectively forgotten about another huge plot element: The idea that Shelby would possibly replace Riker, meaning, she would, in theory, become the new Number One if Picard "died."

In terms of on-screen Trek canon, Shelby doesn't have a first name. In "The Best of Both Worlds" she's brought aboard the Enterprise because she's Starfleet Command's new Borg expert. For the audience, she's also a genuine threat to the status quo of TNG's happy bridge crew. Shelby tells Riker outright that she's gunning for his job, and, this isn't some lame idle threat. As we learn, Riker has been offered the command of his own starship and could get promoted to captain. He's dragging his feet about leaving the Enterprise, but nearly half the episode makes a huge deal about whether or not Riker will take the promotion and leave, and if that means Shelby will become Picard's new First Officer.

Part of the reason why Shelby is so important to the episode is that her presence and ambitious desire to take Riker's job cleverly makes the stakes of the episode much higher. The audience was aware this is a season finale, we knew something was up because the way this episode was written and filmed constantly reminded you that everything was a big deal. So, why has TNG introduced this new character, and why are we spending so much time getting to know her?

The real answer is that Shelby is a plot device to convince us that the show is serious about writing-out... somebody. The first 30 minutes of the episode make you think that person is Riker. He does some serious soul-searching about his own career and his attitude toward Shelby is actually kind of unlikable. Sure, she's pushy, but Riker is mostly shutting her down for the sake of shutting her down. His colleagues and friends point this out. She even beats him at poker. So, if you've never seen this episode before, and you watch it cold, you'll be like: "Wait, is this episode about Riker maybe quitting TNG?" And that's the rub.

Shelby was a hypothetical new Riker

Obviously, because the audience spends so much time thinking about Riker and Shelby when Picard gets captured and assimilated by the Borg, it's a total gut-punch. This episode (written by the late Michael Piller) is really smart. Sure, Picard has ominous feelings about going into battle with the Borg, but he doesn't start the episode by saying "Gee, I really hope I don't get assimilated and turned into a killer drone." The episode makes you worried about the hypothetical stakes for people who aren't Picard, namely Shelby and Riker. When Picard is assimilated and becomes the enemy by default, Shelby basically becomes Riker's Number One. In an alternate dimension, Shelby totally would have remained on the Enterprise with Captain Riker, and Picard would have never returned. Again, from a production standpoint, this was never the plan, but the writing is clever enough to make you think it could happen, which is really the only reason you're worried about Picard not coming back.

To put it another way, why introduce a new Riker-type if they weren't serious about killing off Picard? Brilliant!

But where is Shelby now?

After "The Best of Both Worlds Part 2" (the Season 4 debut) Shelby never once appeared in any Star Trek series again, proving, she was a red herring all along. Sad! She did feature prominently in a series of books called Star Trek: New Frontier and a "Captain Shelby" is mentioned in the Deep Space Nine episode "You Are Cordially Invited," though writer Ron Moore later clarified that wasn't really her. Peter David's New Frontier books established that her name is Elizabeth Shelby, but again, that's not full-on canon. In short, we have no idea what happened to Shelby after "The Best of Both Worlds." Right now, she remains TNG's most interesting plot device, a real character who seemed great, but never returned after her big episode.

Which is why Picard Season 2 should bring her back. This may seem absurd or random, but consider this: The entire plot of Picard Season 1 revolved around BRUCE MADDOX; a character that nobody liked, who only appeared in one episode of Star Trek: The Next Generation. Nothing about Maddox's appearance in "The Measure of a Man," made viewers say, "Hey, I bet we'll see this guy again. Actually, I bet his disappearance will warrant an entirely new series at some point." But it did and that series was great.

Shelby, as played by Elizabeth Dennehy was a super-underrated guest TNG character. She held her own against Riker and was genuine badass while still being a realistic Star Trek character. If Dennehy couldn't (or wouldn't) do Picard Season 2, recasting isn't a crazy idea. John Ales played Bruce Maddox in Picard, but Brian Brophy played him in TNG. Other than very picky diehards, this recasting didn't bother anyone. Shelby could return in the same way.

Why Shelby's return in Picard would be great

Bringing back Shelby could serve all sorts of cool plot purposes. Presumably, she's still a Borg expert, which means she could have had a hand in the Borg Reclamation project. Hell, maybe she left Starfleet and joined the Fenris Rangers, like Seven. Or, if she is still in Starfleet, she could be a new ally for Picard and the crew of the La Sirena, assuming they don't get help from the main TNG cast.

The more interesting thing about Shelby's possible return is that it would be a way to give Picard a bit of nostalgia, but to do it in a way audiences don't see coming. Both Hugh and Bruce Maddox were not major characters on TNG, but rather guest stars. The idea of bringing back a guest star like Shelby would help to reinforce the realism of Star Trek: Picard. Running across the same people from TNG is cool, but what the Bruce Maddox storyline proved is that there's potential in fleshing out small stories. Shelby was never really given her fair shake on TNG, but maybe a future season of Picard could fix that. After all, she was really good at poker, and she did help rescue Picard from the Borg. That's got to count for something.

Star Trek: Picard Season 2 is expected to air sometime in 2021.