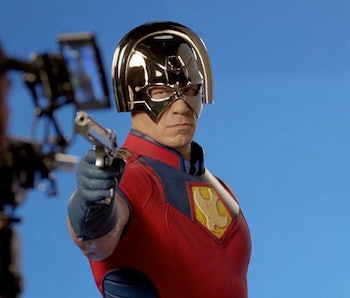 The Suicide Squad is getting a spinoff series about John Cena’s Peacemaker. The show has landed at HBO Max and will be directed and written by James Gunn. Notably, it’s the first DCEU film to spawn a series. HBO Max has slowly been setting up a new home for a number of DC projects, including a Green Lantern series and a Gotham PD show set in the world of Matt Reeves’ The Batman. This loosely connected universe proves that The CW’s Arrowverse was ahead of its time.

Highbrow critics have largely dismissed or ignored The CW over the years, because its television series are not synonymous with the quality of "prestige" networks like HBO, Starz, or AMC. Teen dramas (Riverdale, Charmed) and superhero shows (The Flash, Batwoman) make up most of their weekly slate. The CW and the Arrowverse have been widely seen as "too middlebrow" to be taken as seriously as, say, Game of Thrones (which is also middlebrow, for anyone wondering).

The CW's Arrowverse set the stage for a shared universe, however loosely connected it may be, to exist on another platform. As Marvel worked to expand its cinematic universe, The CW was building one of its own on TV. Kicking off with Arrow in 2012, the series birthed a superhero universe that consists of seven series and counting.

What’s more, the CW’s superhero shows are wildly popular domestically and internationally, are consistently nominated for Saturn Awards (the sci-fi/fantasy equivalent of the Emmys), and work well despite not having as big a budget as prestige TV shows. It seems likely that, considering the deep well DC content available, HBO Max wants to capitalize on the very same model.

During DC FanDome, Jim Lee, Chief Executive Officer of DC Comics, revealed how the crossover “Crisis on Infinite Earths” helped introduce the multiverse to the DCEU by having Ezra Miller’s movie Flash and Grant Gustin’s TV Flash officially meet. The fact that DCEU’s Flash made a crossover appearance at all speaks to the influence of The CW as a launch pad for DC’s success and the benefit of building an interconnected universe for television.

With Peacemaker and The Batman spinoff series finding a home on TV rather than at the movies, executives at Warner Bros. and DC clearly see some value in the structure of The CW’s Arrowverse. That said, there’s a chance that HBO Max is at least trying to upgrade middlebrow superhero fare to highbrow comic adaptations like the Emmy-winning Watchmen.

Of course, not everything is going to be as fantastic as Watchmen, nor does it need to be. Some naysayers will claim HBO has squandered some of its credibility with HBO Max, but its latest additions certainly demonstrate that The CW shows are doing something right.