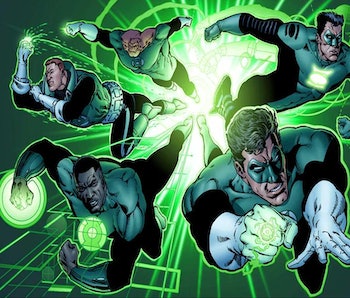 With a new streaming service comes an all-new superhero show. Back in October 2019, AT&T executives announced a Green Lantern-inspired project for the streaming service HBO Max. The still-untitled show will be executive produced by Arrowverse co-creator Greg Berlanti, who promised it will be the “biggest DC show ever made.”

While details about the Green Lantern HBO Max series are still scarce, here’s everything we know about the series so far and how the Arrow series finale sets up this new show.

When will the Green Lantern premiere on HBO Max?

The untitled HBO Max series doesn’t have a premiere date yet. The series allegedly began filming on April 12, 2021. Whenever it finishes filming, it’s not beyond Greg Berlanti to do a quick turnaround, considering what he’s done with the Arrowverse up to this point.

What is the plot of Green Lantern?

During the Television Critics Association’s winter press tour, HBO Max's head of original content, Sarah Aubrey (via TVLine), revealed the series “is going to span several decades and focus on the origin story of two Green Lanterns on Earth while going into the story in space and Green Lantern favorite character Sinestro.”

According to ProductionList.com, here’s the official synopsis for Green Lantern:

The Green Lantern Corps is an outer-space law-enforcement agency aided by each members’ individual power ring that grants the wearer abilities based on the strength of their own willpower. Follows the adventures of a multitude of Lanterns, including Guy Gardner, Jessica Cruz, Simon Baz, and Alan Scott - Earth's first Green Lantern, who, true to the comics, is a gay man - and many more.

Is there a trailer for Green Lantern?

No, not yet. The series is still in production. In the meantime, check out the series finale episode of Arrow for a not-so-subtle teaser.

Who is in the cast for the Green Lantern series?

Arrow’s series finale definitely made it seem like a possibility. Following Oliver Queen’s funeral and the closing of the Green Arrow bunker, Diggle heads to Metropolis for a fresh start. However, the trip is derailed by a space object’s crash landing. A familiar, bright green light greets Diggle when he opens the mysterious box. End scene.

Fans have long speculated Diggle was actually John Stewart, and that he would eventually take the mantle of Green Lantern. The Arrow series finale hinted as much without actually showing the famous Green Lantern ring. What's more, Diggle’s stepdad was revealed to be Roy Stewart. (That surname rings a bell, right?) For a long time, these breadcrumbs seemed like they’d lead to nowhere until the announcement of the Green Lantern series.

In an interview with Entertainment Weekly, Arrow executive producer Marc Guggenheim had this to say about Diggle’s future as Green Lantern:

“This was something that was worked out over a year ahead with DC Entertainment. We very specifically negotiated and discussed the parameters, and I feel like to say anything beyond what we have shown you would violate our agreement with DC.”

“That was very important [to pay off the fan theory]… There’s been a bit of a pay-off. We’ll see what all of that means. I’m with Marc, anything beyond that is kind of violating these parameters that we’ve been given by DC that we have to honor, but I think we’ve done some justice to the six year tease.”

At the very least, it’s possible Diggle will appear as the Green Lantern for future Arrowverse crossovers. While it sure sounds like Green Lantern plans might be in the cards for Diggle, especially since Guggenheim confirmed DC Entertainment’s involvement for that scene, it’s all speculation until we learn more about the HBO Max project.

Will the Green Lantern series be part of the Arrowverse?

Though it hasn’t been confirmed, it’s certainly possible. Beyond Arrowverse architect Greg Berlanti's involvement, the recent Arrowverse crossover, "Crisis on Infinite Earths," revealed that other DC Comics properties are part of the shared multiverse — including DCEU’s The Flash and 1989’s Batman. Part 5 of “Crisis” even confirmed the existence of the planet Oa, the Green Lantern Corps’ space headquarters. Since Arrow teased John Diggle as a potential Green Lantern, it’s hard not to suspect that it all ties together.

Either way, the chances of the HBO Max series’ existence within the Arrowverse are higher than ever, thanks to “Crisis.”

This article was originally published on Jan. 29, 2020