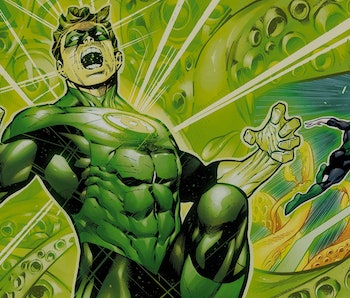 At the Krypton panel at WonderCon in Anaheim this past weekend, executive producer and showrunner Cameron Welsh gave a nod to the Green Lantern Corps. and their potential role in the show’s future.

“We think the Green Lantern Corps would be a perfect fit for our show,” Welsh told fans.

It looks like Krypton is wasting no time trying to build its own universe. A live-action prequel to Superman’s origin story, Krypton just premiered on the Syfy channel last week, joining a packed TV landscape brimming with superheroes. Shows like Arrow and The Flash have established its own universe in crossovers with Supergirl, Legends of Tomorrow, and even Constantine. There’s also independent shows like Black Lightning, and soon Titans, which premieres next year.

Fans are eager to see the Green Lantern finally “done right,” as the internet commenters tend to say, which means it could be Krypton’s chance to capitalize. While Krypton may not yet show its version of the Man of Steel, there is room to show off various Green Lantern Corps. members who existed long before Alan Scott, Hal Jordan, John Stewart, and the duo of Jessica Cruz and Simon Baz. Perhaps Krypton could feature appearances from the “First Seven,” Green Lanterns, who were introduced in Green Lanterns #18 last year. One of those Lanterns was the first-ever Kryptonian member of the Corps, though there have been a few other comic characters with connections to Superman’s homeworld. The Lantern Tomar-Re had been tasked with protecting the planet when it exploded, despite his best efforts, and there was a very powerful Lantern named Sodam Yat who hailed from Krypton’s neighbor, Daxam. Whether the show will tap into Green Lantern’s rich history remains to be seen.

Set generations before Superman was born, Krypton follows Kal-El’s grandfather, Seg-El, as a young man trying to redeem the shamed House of El. True to its name, the series takes place on Superman’s home planet of Krypton years before it blows up, leaving Superman to the be its so-called “Last Son.”

While Krypton promises a self-contained story, its predecessors like Arrow and Smallville prove that no superhero show exists on its own for long.

Krypton airs on Wednesdays at 10 p.m. Eastern on Syfy.