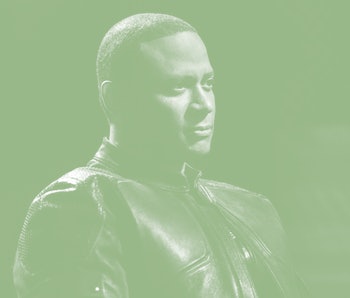 In brightest day, in blackest night, Arrow will reveal the Green Lantern tomorrow night. After eight seasons, The CW series Arrow will end this week, but not before revealing one of its biggest, lingering questions: Is John Diggle actually John Stewart (aka, Green Lantern)?

On Friday, TVLine interviewed actor David Ramsey, who said that the series finale of Arrow will actually reveal whether Ramsey's character John Diggle becomes the Green Lantern. The episode will air Tuesday at 9 p.m. Eastern on The CW.

“Without a doubt. You are absolutely going to get your answers," Diggle said. "And well-deserved answers. We’ve been talking about this for years, and I think everyone by series’ end will be very happy.”

“You are absolutely going to get your answers.”

Ramsey further revealed that he's had conversations with producer Greg Berlanti, who is also at work producing a new Green Lantern TV series for the upcoming Warner Bros. streaming service, HBO Max. Said Ramsey: “I’ve talked to Greg about it, and they have a great plan. It sounds fantastic... People are champing at the bit to see this universe, to see this military corp come to live-action, and I’m among the people who are so excited."

A series regular since Season 1, Ramsey spent all eight seasons of Arrow as John Diggle, Oliver Queen's loyal bodyguard and best friend. (The character was named after Andy Diggle, the author of the DC Comics series Green Arrow: Year One, which heavily influenced Arrow Season 1.) An ex-soldier, Diggle used his skills to aid Oliver in his mission to defend Star City. Diggle graduated to superhero status when he adopted the name "Spartan" in Season 4, complete with his own costume and equipment.

But since the beginning of Arrow, fans have wondered if John Diggle is actually John Stewart. The two bear striking similarities both physical and characteristically, including their military background and general no-nonsense demeanor. In 1972, in the pages of DC Comics, Stewart debuted as a U.S. Marine veteran who took over as the Green Lantern of Earth from Hal Jordan.

The Arrowverse started acknowledging Diggle/Stewart connections beginning with the 2018 crossover "Elseworlds," when John Wesley Shipp's Flash (from the 1990 TV series The Flash) mentioned to Diggle that he looks different without his "ring." (All Green Lanterns are powered by a cosmic emerald ring.) Later that same season, in the episode "Spartan," Ghostbusters alum Ernie Hudson appeared as Diggle's father, General Roy Stewart — proof that "John Diggle" was an adopted name for John Stewart.

Between the existing clues and Ramsey's new interview with TVLine, all signs point to John Diggle being a soon-to-be Green Lantern in the Arrowverse; whether the Arrowverse will actually show Ramsey's Diggle become the Emerald Knight, now or in the future, is to be determined. It's also pretty impossible to pull off such a CGI-heavy character as the Green Lantern on a network television budget; there's a reason The Flash only shows up on Arrow on extremely rare occasions.

Arrow will air its final episode on Tuesday, January 28 at 9 p.m. Eastern on The CW.