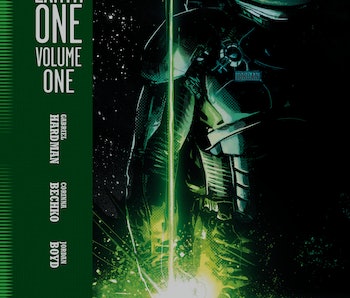 Hal Jordan has a long, rich history in DC’s comic book continuity. As the Green Lantern, he helped establish the Justice League of America, went on a cross-country road trip with the Green Arrow, and was at the center of the 2009 apocalyptic epic Blackest Night. But for most people who don’t read comics on the regular, Green Lantern is best known as the superhero Ryan Reynolds played before he starred in Deadpool. A stunning new graphic novel is a chance for the Emerald Knight to make a bold first impression once again.

Released late last month, Green Lantern: Earth One from Corinna Bechko and Gabriel Hardman continues the “Earth One” graphic novel series, in which DC icons are reimagined in a totally separate (read: easy to get into) universe. Unlike past Green Lantern stories, however, Bechko and Hardman stripped away some of the hero’s most familiar elements, including his hotshot reputation, support from the Guardians of Oa, and an active Green Lantern Corps. to rely on, to effectively create a new mold of the Green Lantern even veteran readers had never seen before.

“The last thing we wanted was for Hal Jordan to be chosen and have structure he would have to work within,” says co-writer Gabriel Hardman in a phone interview with Inverse. “The essential image we started with was [Hal] having the ring but not being able to control it and almost dying in space. Because the ring is a tool you have to learn how to use. It’s not there to protect him.”

Hal Jordan, hotshot pilot? More like Hal Jordan, lowly asteroid miner. The Green Lantern Corps.? They’re more like ghosts; in Earth One, the Corps. were wiped out by machines called the Manhunters a long time ago. Truly, Green Lantern: Earth One is a bold new interpretation of the classic hero, who in this reality must stop annihilation on his own, in a far scarier universe.

It seems like a paradox, but hearing it directly from Hardman and Corinna Bechko, the creative duo whose previous works include Aliens: Dust to Dust for Dark Horse and Planet of the Apes for BOOM! Studios, it makes sense: To make a Green Lantern tale anyone can get into, lots of change was necessary. “We talked about how to make it feel like a Green Lantern story, a sci-fi story, but also make it a story that a person that didn’t know anything about Green Lantern can enjoy,” Bechko says.

There’s nothing wrong with Hal Jordan’s story — it’s worked for 78 years — but Earth One is all about experimentation. Beginning with 2010’s Superman: Earth One by J. Michael Straczynski, DC has allowed a select crop of creators to try new things with heavyweights like Batman, Wonder Woman, and soon, Aquaman and The Flash, in its series of Earth One graphic novels. Unlike most comics released monthly, the output of Earth One is staggered, and whole books are released at once. Think of Earth One as the movies of comics, where the essentials of a superhero are highlighted with premium polish.

As Bechko puts it: “They’re about character, not continuity.”

But Bechko and Hardman sought to take their reinvention of Hal Jordan much further than previous writers have imagined Batman and Superman. That motivation came, in part, because of the 2011 movie Green Lantern, which Hardman worked on as a storyboard artist in its “early stages.”

“It was incredibly obvious it was going to be difficult to tell the story they were trying to tell and make that work,” Hardman says. “At that point, I ended up thinking about what would make a good Green Lantern story. What would be a good way to approach Green Lantern from the ground up?” To Hardman, the answer came in stripping away familiar elements that are — with apologies to the faithful die-hards — inessential.

“It’s not difficult,” he says, “You just have to strip away the things that work for a character [that’s been] around for fifty years but aren’t necessary to telling [a story]. You can take away some of the trappings that aren’t absolutely necessary to tell a core Green Lantern story.”

Hardman argues that circumstances dictate character. He compares Hal Jordan to Humphrey Bogart’s character in the film classic Casablanca. “Humphrey Bogart would not be who he was if he didn’t have to deal with the circumstances he was in,” he says. “Those events shape us and at a certain point you have to stand up and make the decision to sacrifice, to make heroic choices. That’s the story we wanted to tell.”

“It’s much more heroic, I believe, if you choose to stand up and do the important thing than than if you are chosen,” Bechko adds. “If you are the king’s son, you’re the king’s son, and all you have to choose is not to do evil. But you have to choose to do good if you’re a guy on the street. That’s the main thing [of this book], you don’t have to be anointed to be a hero.”