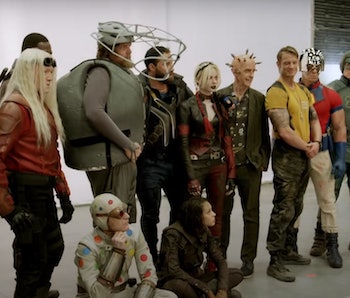 DC FanDome offered fans their first glimpse at The Suicide Squad. In addition to revealing the full cast of characters, DC also shared behind-the-scenes footage of the making of the film. Turns out, that bonus material may have accidentally revealed the movie's main villain.

Reddit user Yaboy_mirage screencapped an image from the sneak peek and zoomed in on an obscure purple figure covering a soldier’s face on the ground. Upon closer inspection, the blurry image appears to be an object in the shape of a star. That suggests the villain of The Suicide Squad will be Starro the Conqueror.

Starro first appeared in 1960s Brave and the Bold #28 and is actually the first villain to go up against the Justice League in their official appearance as a team. Starro is the leader of an alien race called the Star Conquerors (hence the name), a species that looks like giant starfish with an eye in the center of their bodies. Starro has the ability to mind control humans and aliens alike, using these abilities to bring humanity and its superheroes under his rule.

Starro can also generate a number of clones from his spores, which function as parasites that can take control of humans’ nervous system and leave them incapacitated. Starro has employed these parasites to control an infinite number of species all at the same time, which makes him quite a formidable adversary to the Justice League and other DC heroes. Starro has appeared in several animated shows, including Young Justice, Batman Beyond, as well as in the movie Justice League: The Flashpoint Paradox among many others.

Starro the Conqueror is one of the more outlandish villains in DC Comics, which makes his potential involvement in The Suicide Squad an on-brand choice for James Gunn. We don’t know much about the plot of the film or even how the antagonist will factor into the 1970s war setting. That said, Starro’s potential appearance would mark the first time he’d be battling the Suicide Squad.

It’s possible Lex Luthor is involved with Starro’s arrival on Earth. Lex convinced Bloodsport to kill Superman in the comics. That means he could be pulling the strings from the sidelines. What’s more, Lex has been a leader of the Secret Society of Super Villains in the comics, which Starro has been a member of at various points.

Perhaps Starro showing up to mentally enslave population is all a part of Lex’s nefarious plan, or he's working on his own. Whether or not Starro is the culprit behind the Suicide Squad’s mission remains to be seen, but it would certainly fit into the tone that Gunn seems to be going for with the film.

The Suicide Squad comes to theaters on August 6, 2021.