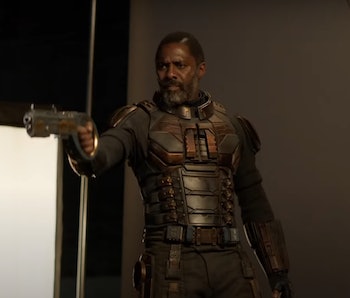 Little was known about The Suicide Squad prior to DC FanDome. Some assumed Idris Elba would replace Will Smith as Deadshot. Turns out, director James Gunn decided to go in a different direction. During The Suicide Squad panel at DC FanDome, a teaser video confirmed that Elba will play Bloodsport, a mercenary and one of Superman’s many foes.

Who is Bloodsport? In the comics, Bloodsport was first introduced as Robert DuBois in 1987’s Superman Vol. 2 #4. After learning that his brother enlisted to fight in his place, DuBois had a breakdown and subsequently became obsessed with the Vietnam War. DuBois was later persuaded by Lex Luthor to kill Superman, believing the Man of Steel to be the root of all evil and the one responsible for DuBois and his brother’s state.

Armed with a teleporter and high-tech weaponry, DuBois takes up the mantle of Bloodsport and carries out his murderous plans in Metropolis before eventually shooting Superman with Kryptonite bullets, courtesy of Luthor. He’s eventually sent to prison for his crimes.

In the grand scheme of things, Bloodsport a minor character compared to Deadshot. However, Gunn has a tendency to take little-known characters (like in Guardians of the Galaxy) and give them a broader storyline.

More recently, a third man has assumed the mantle of Bloodsport, but this iteration’s true identity is still a mystery. The character appeared in a Season 3 episode of Supergirl and elsewhere in the animated series Justice League Unlimited.

The Suicide Squad is being marketed as a 1970s war movie, so it makes sense that DuBois’ version of Bloodsport is the one included in the villainous line-up (no one wanted the racist version anyway). Considering Bloodsport’s fixation on the Vietnam War, it’s possible that the film will delve into his comics backstory to provide a blueprint for how he ended up on Amanda Waller’s cold-blooded team.

All that said, it’s still unclear how The Suicide Squad fits into DC’s movie universe. If the film is set in the 1970s and includes several of the characters from Ayer’s film (Harley Quinn, Waller, etc.), then it’s possible that the movie is actually set on another earth. After all, DC films are beginning to explore the idea of the multiverse, with The Batman and The Suicide Squad both seemingly set outside of the DCEU timeline.

We can assume that Bloodsport’s obsession with defeating Superman will be scaled back as well, especially considering that the man of steel won’t be appearing in the movie (that we know of).

The Suicide Squad will premiere on August 6, 2021.