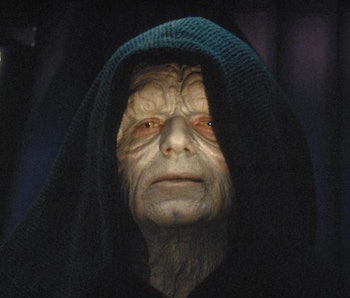 While the sun may have set on the Skywalker Saga, one character still defines all nine movies: Emperor Palpatine. Over decades of both real-life and in-universe time, Sheev Palpatine (aka, Darth Sidious) terrified audiences again and again as the face of the Sith Order. While his return in The Rise of Skywalker seemed to come completely out of left field, the clues lie all around the Star Wars movies — if you know where to look.

Back in May 2020, redditor u/understandably_so compiled a list of evidence to explain how Palpatine's return as a clone was logical, using only examples from the movies (not the novelizations, which explain cloning in detail). Star Wars novelizations are often used to add clarifying information after the fact, so using only clues from the movies keeps the evidence to what's most explicit. There's lots of evidence to Sheev's return, but these moments are the most pertinent.

Palpatine: "I am all the Sith"

Palpatine's final words have become the basis for all sorts of theories, and this one takes it more figuratively. Just as Rey is the culmination of all the Jedi, as we saw when she heard their voices, Palpatine is the culmination of all the Sith before him. This comparison enriches the odd biological relationship between the two, given that we now know Rey is the daughter of a botched Palps clone.

Just after he saps the life out of Rey and Kylo, Palpatine announces to his audience of Sith Eternal cultists, "look what you have made." This seemingly confirms the fact that the Sith Eternal quite literally made this version of him. As u/understandably_so points out, this shadowy group clearly has easy access to cloning technology, as evidenced by all those pickled Snokes.

That and the Sith Fleet suggests a vast abundance of resources at the Sith Eternal's disposal, far more than was shown on-screen. We know Sheev eventually planned on overtaking Rey's body, but this backup scheme shows another aspect of Palpatine that many forget about: he meticulously plans and has the charisma to command loyalty from immense numbers of followers.

One of the major fan theories surrounding Palpatine is that his body is actually a reanimated corpse, and his appearance in The Rise of Skywalker supports this. His body is decrepit, his eyes glassy, and he's hooked up to what appears to be the Ommin harness, which belonged to a Sith lord who lived thousands of years before the events of the film, according to formerly canon Legends books and comics.

This theory doesn't agree with the Zombie Palpatine conclusion, instead suggesting that Darth Vader's sheer power as evidenced in Return of the Jedi debilitated Palpatine to the point where his only choice was to go into hiding for 30 years. It also goes to show just how great Palpatine's power can be as a regular clone body can barely contain it functionally.

Speaking of Darth Vader, there's a line in Revenge of the Sith that's mentioned alongside the oft-repeated Darth Plagueis anecdote. Palpatine tells Anakin Skywalker, "To cheat death is a power only one has achieved, but if we work together we can discover the secret." This foreshadows how both Sheev and Anakin will go on to cheat death. In Palpatine's case, it's achieved through the mysterious cloning. In Anakin's, it's through his breathing apparatus as Darth Vader, allowing him to live on past when Obi-Wan left him for dead.

While fans continue to debate whether Palpatine's return was the logical choice for The Rise of Skywalker, Sheev could be plotting yet another return, so it's never too late to examine the clues.

All nine Skywalker Saga films are streaming on Disney+.

This article was originally published on May 7, 2020