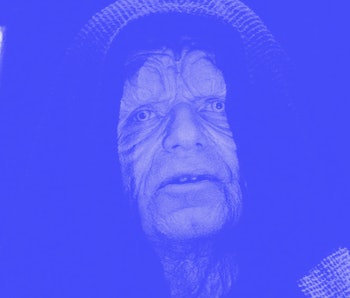 Emperor Sheev Palpatine is arguably the best Star Wars villain of all time, and the franchise has yet to come up with a more menacing or petty big bad in the decades since he was first introduced in The Empire Strikes Back. In a recent survey, Inverse polled 1,275 Star Wars fans about all things Palpatine (What was he like as a teen? Who does he fear the most?) and one thing stood out above the rest.

A whopping 37.7 percent of Inverse readers said Return of the Jedi featured the best version of the character. Naturally, we broke down exactly why the version of Sheev from Return of the Jedi seemed to resonate the most with fans. Here are three reasons why the Palpatine in Episode VI proved the most popular:

The villain’s introduction in Empire Strikes Back piqued our curiosity, but Return of the Jedi established Palpatine as a fully formed person. He wasn’t simply a seething hologram, he had goals and a flair for the dramatic. Episode VI showcased how mean-spirited he could be and how he delighted in witnessing the pain and turmoil of others.

There’s no better example than when Luke Skywalker confronts wily Sheev. He lets Luke talk, declaring himself a Jedi (how sweet) and Palpatine looks disturbingly amused. Then he starts electrocuting Luke and it’s clear Palps revels in mercilessly torturing the young Jedi. It’s scenes like these that reveal why Return of the Jedi is quite obviously the definitive iteration of Palps.

2. Emperor Palpatine was at the peak of his power

Palpatine was at the height of his strength and influence in Return of the Jedi. He’d already started a galactic civil war, overthrown the former government to establish his own Galactic Empire, fully mastered the power of the Dark side, and built an entire army with a Death Star at his disposal.

It’s no wonder he was so cocky, fueled by arrogance and unwavering confidence that he’d finally reached the pinnacle of his career. Even Yoda, who was one of the only Jedi to truly threaten his rule, was dead by the end of the film. There was no one to stop him, or so he thought anyway.

1. A hooded and gleeful Emperor Palpatine is the best Palpatine

Emperor Palpatine has a long history in the Star Wars franchise, but Return of the Jedi was the first time we got a really good look at the galactic menace. Dressed in a head-to-toe black robe complete with hood, Palps dropped the stern emperor act and transitioned to full Dark side attire.

What’s more, his face was already disfigured, marred with deep crevices and his eyes turned to an unnatural yellow. To complete the creepy look, Palps sported an off-putting smile, usually accompanied by a gleeful twinkle in his eye that suggested he knew he was the best and would win. His success was assured.

Of course, all of these reasons also explain why Palpatine ultimately met his downfall, mercilessly being thrown down the shaft of the Death Star by his apprentice Darth Vader. Although the Star Wars villain would return in the prequels and in The Rise of Skywalker, The Return of the Jedi will always be remembered as peak Palps.