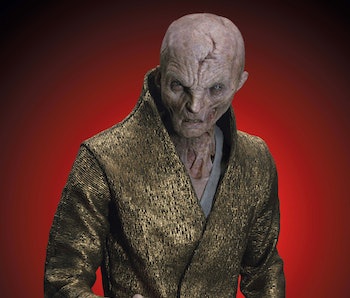 The Rise of Skywalker novelization has been out for almost a month, but the revelations are still coming. The movie revealed that Snoke was a clone, and the book revealed Palpatine was one too, but the relationship between the enigmatic villains continues to be shrouded in mystery. However, a brief reference to Palpatine's "throne" in Rae Carson's book could bring a mysterious Legends character into canon, while possibly giving us greater insight into Snoke's true identity.

When we first see Palpatine in Exegol, he's deformed and sickly, encased in a sort of exoskeleton that seems to be keeping him alive. In the novelization, this is referred to as an "Ommin harness." Don't recognize that name? King Ommin was a Sith Lord involved in the non-canonical Legends comics and books, but the Rise of Skywalker novelization officially brings him into canon.

King Ommin was a king of Onderon thousands of years before the events of Star Wars, and descended from a long line of Sith Lords. Clone Wars and Rebels visit the planet several times, and it's the home planet of Rogue One's Saw Gerrera.

Ommin's use of the Dark Side deteriorated his body, and many thought him to be dead. Much like Palpatine, he emerged years later in order to wage one last war against the Jedi. He was able to stay alive during this time due to a specially made durasteel harness, attached to each part of his body. So Darth Vader wasn't the first Sith Lord to rely on technology to survive.

So if Palpatine somehow acquired Ommin's harness, what's the connection between the two? Reddit user jayjaysmith992 theorizes the connection could be the key not only to Snoke, but to Palpatine's rebirth. It's implied Sith Lords can keep themselves alive for centuries by draining the life Force of others, so it's within the realm of possibility that King Ommin himself may have assisted in Palpatine's return, and then sacrificed himself in order to form Snoke.

The novelization also revealed the process for cloning Force-sensitive beings is complicated. You can clone a perfect body with no Force sensitivity, or you can clone a Force-sensitive being, but it will suffer physical disfigurement. This tracks with the theory, especially considering just how emaciated Ommin was before the cloning process even begun. This may explain the tanks full of discarded clones shown in the beginning of The Rise of Skywalker.

If Snoke is a clone of Ommin, Carson's book could be the first step toward bringing a fascinating era of Star Wars Legends back into the official canon.