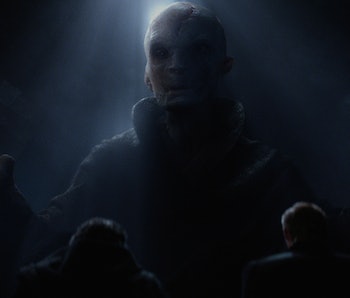 For the past four years, Star Wars fans have known one thing to be true: All of our Snoke theories are probably wrong. At times we’ve thought he was Mace Windu, other times, a deranged version of Lobot, and in our worst moments, a kind of Star Wars version of Snuffleupagus who can only bee seen by Kylo Ren, Rey and sometimes, Hux. But now, the Snoke truth (might) be out there. A new “leak” from The Rise of Skywalker suggests that maybe, the mystery of Snoke will be solved in the opening moments of Episode IX, and it just might shake the Skywalker saga to its core.

Possible very, very huge spoilers ahead. There is some speculation here, but some of this is coming from “leaks” which may be partially, or completely true. Proceed at your own risk. We’re literally weeks away here, people. So, if you don’t want to know this, turn back. We don’t know that’s it’s true (we haven’t seen the movie yet) but it could be! Last warning!

Okay, so according to Jason Ward over on Making Star Wars, the opening of Rise of Skywalker has been recut and now features Kylo Ren landing on a creepy planet called Exegol, where he finds: “…small creatures that are tending to the capsules or barrels called The Relics…Inside these barrels, Kylo sees the body of former Supreme Leader Snoke…these are all clones.”

The implication here is that Snoke has always been a clone of Palpatine or a proxy of Palpatine in some way, shape or form. Basically, this means that the Sith “Rule of Two” never stopped, it was just rebranded as Snoke (actually Palpatine) and Kylo Ren. If this is true, then, retroactively, every single episodic Star Wars film suddenly is about Palpatine and one of his dark apprentices. If Snoke is a weird Palps clone, we can view each Star Wars film in the “Skywalker” saga about the story of a Sith pairing. Here’s how the saga looks through the Sith lens:

The tease of Dark Rey makes the plotline of Palpatine trying to get her as his new apprentice seem all the more likely. Plus, as the Making Star Wars leak seems to also confirm: Rey is 100 percent related to Palpatine and both Luke and Leia have known this the entire time.

While this seems a little out there, the real rub is that in a roundabout way, Luke and Leia are actually kind of related to Palpatine. Last year, in the Marvel Comics Darth Vader series (which is canon) it was made pretty explicitly clear that Palpatine was responsible for impregnating Shmi Skywalker with a Force baby prior to The Phantom Menace.. If the films are honoring this continuity (and there’s literally no reason to think they won’t) then that means Palpatine, as we’ve said before, is, if you squint, also a “Skywalker.” (How can the father of a Skywalker not be a Skywalker, that’s what we’re saying here.)

So, if Palpatine has actually been present in the sequel trilogy the entire time, and these barrels of Snokes prove that fact, then that means Star Wars is perhaps, pulling off the biggest retcon since the conception of Anakin Skywalker and the invention of the midi-chlorians. Now, the idea that Palpatine would have numerous clones of himself has existed before, of course, in the Legends canon of the 1991-1992 series Dark Empire. But, that was before Kylo Ren, Rey and even the knowledge that Palpatine was, in at least one sense, Anakin’s father.

The point is, if this turns out to be true, it makes Palpatine even more important to the overall saga than he’s ever been before. In 1991, we were able to accept that in a comic book series. But will Star Wars movie fans buy it 2019?

Star Wars: Barrels of Snokes is out everywhere on December 20, 2019.