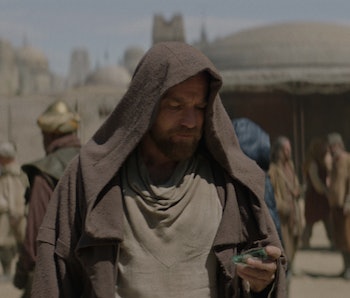 Star Wars fans know plenty about the Skywalker family. But can fans say the same thing about the Kenobi family?

In the third episode of Obi-Wan Kenobi, streaming now on Disney+, Obi-Wan (Ewan McGregor) makes a passing reference to his own family, including his brother.

This is the first time in live-action Star Wars that Obi-Wan has made any reference to his blood family, let alone his own brother. But the history of Obi-Wan having a brother is actually a long one, with one character, in particular, being a possible candidate.

“I still have glimpses” — In the third episode of Obi-Wan Kenobi, directed by Deborah Chow, Obi-Wan and a young Leia (Vivien Lyra Blair) narrowly escape a group of suspicious Stormtroopers. After the troopers exit, Leia asks Obi-Wan about her real mother. Obi-Wan relates that he wishes he could know his blood family too.

“As Jedi, we’re taken from our families when we’re very young,” Obi-Wan says, “I still have glimpses. Flashes, really. My mother’s shawl. My father’s hands. I remember a baby.”

When Leia asks about the baby, Obi-Wan says he might have had a brother. “Really don’t remember him. I wished I did.”

The episode moves on without dwelling too much on the whereabouts of the Kenobi clan, but with Star Wars being Star Wars, this opens up a whole new galaxy of exploration.

Obi-Two Kenobi? — The concept of Obi-Wan having a brother is actually awfully complicated.

It begins in the now swept-over Legends canon. In the 1983 novelization of Return of the Jedi, which was based on an earlier draft of the script, it was revealed Obi-Wan and Owen Lars were brothers.

Hence why Obi-Wan was always hanging so close on Tattooine, and why in A New Hope, Owen (Phil Brown) calls him a “wizard” and “a crazy old man.” Besides trying to discourage Luke from gallivanting away from the farm and into danger, who among us hasn’t talked smack about our own brothers?

This was further supported by both the 1995 Star Wars Customizable Game, which described Owen Lars as “Brother of Obi-Wan Kenobi,” and in the 1999 novel Jedi Apprentice: The Hidden Past, a prequel to The Phantom Menace in which Obi-Wan has a dream of his brother Owen.

However, this whole thing started coming undone in 2002’s Attack of the Clones. In that film, Owen (played by Joel Edgerton) is introduced as Anakin’s step-brother, as the offspring of Shmi Skywalker and Cliegg Lars, a farmer who “bought” Shmi from Watto and married her.

“I guess I’m your stepbrother,” Owen tells Anakin (Hayden Christensen) when he and Padme (Natalie Portman) visit the Lars farm on Tattooine while in search of Shmi.

As our own Ryan Britt points out, George Lucas has been involved in all of the aforementioned Star Wars media, which makes the intended identity of Obi-Wan’s brother unclear. Then again, only a Sith deals in absolutes...

O Brother, Where Art Thou? — For now, it’s clear the Kenobi family is meant to be a mystery, a question not even the series Obi-Wan Kenobi is keen to answer.

With the series centering exclusively on a post-Revenge of the Sith Obi-Wan embarking on a “final mission” to bring Leia home, there’s not a lot of time left for Obi-Wan to find the whereabouts of his family. Even so, what would be the point? As Obi-Wan himself says, his family were the Jedi. They are the only family that ever mattered to him.

It is likely that some future Star Wars media will afford another glimpse into Obi-Wan’s blood family, be it a comic book or a prose piece in a new Star Wars book or anthology collection. But don’t count on Obi-Wan Kenobi to answer the questions you seek. At least, not yet.