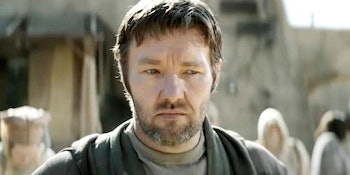 Obi-Wan is not Luke Skywalker’s fake uncle. But then again, what if he was? In the old-school Star Wars “Legends” canon, Owen Lars was not step-brothers with Anakin Skywalker but instead Ben Kenobi’s actual brother. Since Attack of the Clones in 2002, Star Wars canon has never touched this strange hiccup. Unless of course, the new series Obi-Wan Kenobi finds a way to reconcile this very odd bit of trivia. Here’s how Obi-Wan and Owen could — kind of —  be brothers.

In various non-canon Star Wars sources, Owen Lars was the secret brother of Obi-Wan Kenobi. One notable example of this comes from the card for Owen Lars in the Star Wars Customizable Card Game, circa 1996. The text read simply:

Not only were the artists and designers showing fans screenshots and stills from the films we’d never seen before, but entire characters’ backstories were getting fleshed out in a way that was more meaningful than anything had come before. If you played the game in the late ‘90s, seeing this factoid on the Owen Lars card was likely burned into your brain.

The notion that Owen Lars had been secretly Obi-Wan’s brother originated with James Kahn’s 1983 novelization of Return of the Jedi, in which Obi-Wan straight-up told Luke that Owen was his brother. This book is still in print, and if you buy the book-version Return of the Jedi right now, you will find on page 66 (of the Kindle version), Obi-Wan telling Luke, “So I took you to live with my brother Owen on Tatooine...”

Obviously, Attack of the Clones neatly undid all of this by having Owen Lars retroactively become Anakin’s step-brother because Cliegg Lars married Shmi Skywalker. What’s funny about all of this is that not only did George Lucas write and direct Attack of the Clones, he also authorized the novelization of Return of the Jedi in 1983 and the Star Wars CCG in 1996. You could argue that on some level, George Lucas both does and does not want Owen Lars and Obi-Wan to be brothers.

In Obi-Wan Kenobi, both Joel Edgerton and Bonnie Piesse will return to their roles as Owen and Beru. Recently, Obi-Wan director Deborah Chow told EW: “Thank you, George, for casting Joel Edgerton as Uncle Owen.” The obvious meaning of this is that Edgerton is a great actor, and Chow is thrilled he’s already canonically Uncle Owen, a brief role that Edgerton was barely able to explore in Attack of the Clones and Revenge of the Sith.

But what if there’s more to this? What if an expanded role for Owen in Obi-Wan Kenobi could also reconcile the previously glossed-over Obi-Wan brother thing? In the first trailer for Obi-Wan Kenobi, Owen is pretty prominent, and based on the context, it seems like he’s covering for Ben.

So, let’s just pretend: If Uncle Owen is covering for Obi-Wan in the new series and lying to Imperial officers about his relationship with him, could we see a moment where he claims the two of them are brothers?

If you let this theory soak in for a second, it makes a lot of sense. If Owen and Obi-Wan are going to interact in the new show, they’ll probably need to hash out some details as to Yoda’s shoddy cover story. Even if it’s just a fleeting moment, it seems possible that Owen could lie to someone about his relationship with Obi-Wan.

And if he tells someone that Obi-Wan is his brother, this old-school canon could briefly make sense. Because if you just glance at Joel Edgerton and Ewan McGregor, it’s easy to believe they could be brothers. And if that trick works on us, imagine how well it would work on some nosy stormtroopers.

More like this
Culture
Jan. 25, 2023
Star Wars canon just made the Jedi timeline a lot weirder
By Ryan Britt
Entertainment
Jan. 30, 2023
Doctor Who Could Become the New Marvel — But There's a Catch
By Ryan Britt
Entertainment
Jan. 30, 2023
The Last of Us Episode 3 Features One Subtle Video Game Easter Egg
By Alex Welch
LEARN SOMETHING NEW EVERY DAY.
Related Tags
Share: