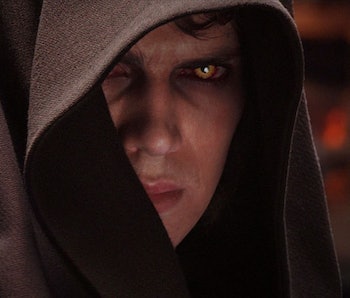 We still don't know what the next Star Wars movie will be, but in the meantime, Lucasfilm is moving forward with its new book series: "High Republic." While there's no confirmation that High Republic will become a movie, it feels like a definite possibility. And with that in mind, the latest details about this new story could reveal a lot about the dramatic twist at the heart of the next Star Wars movie.

At its core, Star Wars has always been about Jedi succumbing to the Dark side (and also, sometimes, Sith turning to the Light). So when StarWars.com revealed new details about the main crop of Jedi in High Republic, it immediately made me wonder which of these new heroes could actually become a villain.

In the same article, Lucasfilm Publishing creative director Michael Siglain compares the High Republic characters to a superhero team like the Avengers.

"Individually they are strong, together they are invincible," he says, "but like the best heroes they each have lessons to learn and challenges to overcome. Exciting times lie ahead.”

But does this team have a weak link? Let's take a closer look.

Avar Kriss — "Avar is the brightest, most noble example of Jedi-hood," the blog reveals. She's a team leader and the "best of the best." Could Avar turn evil? It seems unlikely considering all these accolades, but anything is possible. Plus, a fall from that high would be all the more epic. So don't rule it out, but don't bet on it either.

Dark side risk: Don't count on it

Loden Greatstorm — Described as"one of the best teachers in the Jedi Order" with a "good sense of humor," we're getting Yoda vibes from this guy. I'd be shocked if he turned out to be a Sith.

Dark side risk: Not a chance

Keeve Trennis — Here's where things get interesting. Keeve is a "young firebrand Jedi, believed to have a great future ahead of her." She's described as "impulsive" and "determined to prove herself to Avar" If you think that sounds like young Anakin Skywalker you're not wrong, but will Keeve also turn to the Dark side? I'd give her even odds.

Stellan Gios — Stellan is an "optimistic and well-respected Jedi Master" described as "strong in the Force and a natural teacher." He's fought alongside Avar before, but they don't typically work together. When High Republic begins he's positioned on a distant Jedi Temple outpost. Could Stellan be up to something sketchy out there? Will he be influenced by the Dark side while isolated from his Jedi friends? I wouldn't rule it out.

Dark side risk: Slim, but possible

Vernestra “Vern” Rwoh — Last, but certainly not the least, Vernestra is a "newly-minted Jedi Knight" and "one of the youngest Knights in a generation." Nothing about her personality suggests Sith tendencies, but she's also clearly eager to prove herself — and that could set this young Jedi Knight down a very dark path.

The untitled next Star Wars movie will be released on December 16, 2022.