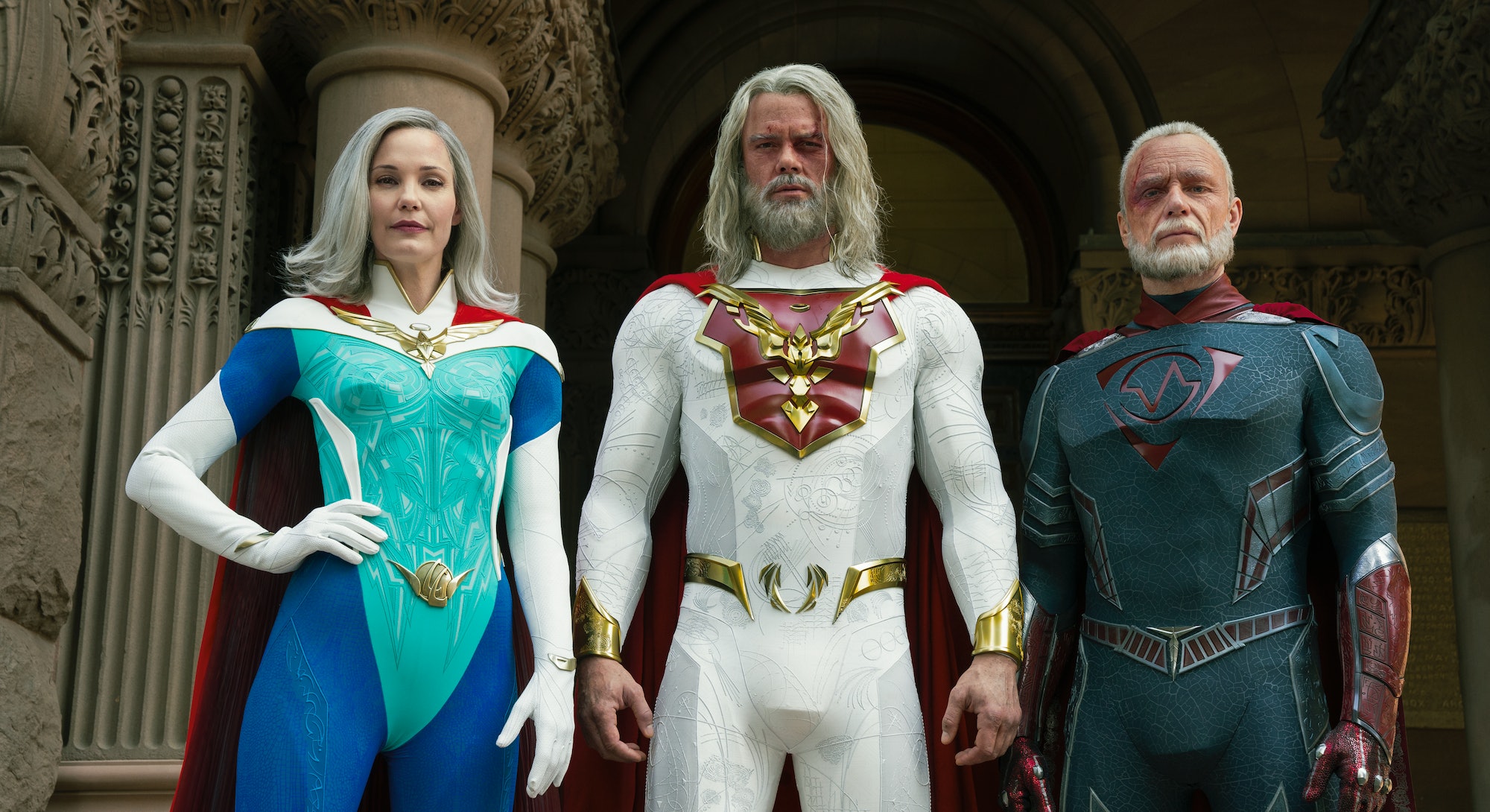 When Mark Millar created the comic book Jupiter’s Legacy, the United States looked very different than it does today.

It was circa 2013. The financial crisis was recent history. Occupy Wall Street had just given income inequality a name and Black Lives Matter didn’t have one yet. Almost everyone had a smartphone, but we didn’t realize how invasive those devices would come to be.

This was the America Mark Millar sought to navigate with his own superhero universe. Eight years later, Millar’s tale gets the big-budget live-action superhero treatment on Netflix — but the landing doesn’t quite stick.

Brimming with conflict but lacking momentum, Jupiter’s Legacy is an engaging superhero binge that could go places its distinguished competitors dare not, but it hasn’t gone there yet.

Having acquired Kick-Ass and Wanted creator Mark Millar’s Millarworld in 2017, Netflix’s take on Jupiter’s Legacy tones down the comic’s socio-political elements in favor of a simpler story about a family in turmoil. Without Millar’s self-described leftist politics and an elongated plot that ensures the source material doesn’t run dry (there are fewer than 30 issues as of this writing), Jupiter’s Legacy fails to fly up and away from a crowded and competitive space.

A cast of committed, charismatic actors keeps things afloat, and instances of brilliance foretell how it could usher in a new era of superhero stories. A novel use of aspect ratio (more on that later) is itself an experiment Marvel and DC could take notes from, and its resistance to turn its Superman figure into yet another sociopathic villain (as in Homelander, Omni-Man, or the recent U.S. Agent in The Falcon and the Winter Soldier) is almost an innovation in its own right. Jupiter’s Legacy just needs to rely more on what makes Millar’s story special than Netflix algorithms to save itself.

Part This Is Us and part King Kong, Jupiter’s Legacy is anchored by one hero: the Utopian (Josh Duhamel), the world’s greatest superhero and leader of the Union of Justice. In 1929, the Utopian was Sheldon Sampson, the easygoing rich son of a steel tycoon until the crash cost them everything. In his sleep, Sheldon dreams of an island. With an adventuring party — including brother Walter (Ben Daniels), best friend George (Matt Lanter), and journalist Grace (Leslie Bibb) — he sails to the island and returns with superpowers to save America.

Sheldon’s origin runs parallel to the present, where the now-aging Utopian (Duhamel in CrossFit Santa cosplay) struggles in a changing world. His children, stubborn Brandon (Andrew Horton) and reckless Chloe (Elena Kampouris), are on different yet destructive paths. Grace, or “Lady Liberty,” is distant. Walter, a psychic called “Brainwave,” is starting to speak out against the Utopian’s precious “Code,” a principle to not kill or interfere in world affairs.

Jupiter’s Legacy is about many things: power and powerlessness, parenthood, responsibility and accountability, and what it means — and what it takes — to leave things better than you found them. Unfortunately, Jupiter’s Legacy prefers to have characters debate and argue, almost ad nauseam, rather than act.

Along with a comparatively more verbose plot that puts off the comic’s best moments in a gamble for Season 2 renewal, Jupiter’s Legacy struggles to be more than an above-average Netflix series. In 2013, it would have been impressive. In 2021, we’ve already seen The Boys, Invincible, Watchmen, Doom Patrol, and other shows do the exact same thing, but better.

The point is clear: There’s a wide-eyed grandeur of the past that those of us in the present fail to see. But it only does a disservice to the story that Jupiter’s Legacy never commits to a singular vision, which would unify its generationally divided characters and their intertwined paths.

Another mark against Jupiter’s Legacy is its reluctance to let characters be who they are in spaces that would define them. There is lots and lots of talking during awkward family dinners, in noisy nightclubs (à la The Social Network), beer-fueled chats at the Union round table, therapy sessions, pillow talks, coffee diners, and arguments over an enemy’s corpse. These are the show’s defining locales than bank robberies and supervillain battles. It’s enough to wonder who this show is for. (Though the PG-13 sex scenes make it clear this is for Adults.)

That’s not to say Jupiter’s Legacy doesn’t have its redeeming moments. In one memorable fight scene set against a golden evening, the Union battles “Blackstar” (Tyler Mane), a knockoff Thanos. The fight is colorful and full of texture. It isn’t necessarily pretty, but it’s more interesting than the drab, color-graded overcast imagery of the Marvel Universe. When characters fly, you feel the wires hoisting the stunt actors.

My editor rolled his eyes at the scene, likening it to something ripped right out of Power Rangers. But I love Power Rangers. I love it when superhero action has weight and gravity and looks as colorful as a Saturday cartoon. Even if it opposes the very themes Millar pursues, Jupiter’s Legacy knows what I dig. This algorithm sure is something.

Mark Millar made Jupiter’s Legacy during a different America and a different media landscape. Everything about streaming was new. When Netflix bought Millarworld years later, in 2017, the streaming giant was near the end of its agreement with Marvel and needed a competitive catalog to adapt for content. On the surface, Millarworld’s limited series comics — some about superheroes, some not — seem like the rich well Netflix can draw upon for years. Jupiter’s Legacy is that first dip, and chances are there will be mathematical returns for its investment.

But Millarworld isn’t the MCU. Based on this execution of Jupiter’s Legacy, a slim comic with a cinematic imagination but not a lot of legs for quarterly goals, Netflix seems to be only vaguely aware of Millarworld’s strengths and weaknesses while betting it explodes into something more. Somewhere, a Netflix exec is frothing for a Brainwave spinoff.

Jupiter’s Legacy, a prestige comic from a name creator, looks exactly like what streamers think nerd subscribers want. It can be. Jupiter’s Legacy is more aggressive and sexual than the MCU and has space to be overtly political. Those are its natural advantages over the maddeningly inoffensive Marvel Cinematic Universe — and Netflix takes advantage of none of it.

Jupiter’s Legacy is now streaming on Netflix. All eight episodes of Season 1 were provided for review.