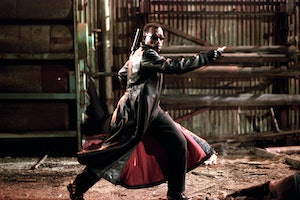 Spring blooms, and so do the sci-fi offerings on Netflix. Natasha Lyonne returns with a new season of Russian Doll. An iconic superhero trilogy is finally making its way back to streaming. Richard Linklater offers what could be a new animated classic. That’s just a sample of the many other science fiction thrillers and superhero adventures that will pop up on Netflix in April 2022.

We’re here to highlight the 10 movies and TV shows you need to add to your Netflix streaming list this month.

April brings a sci-fi family adventure from the U.K. with The Last Bus. The series follows a group of students as they face off against an army of drones. What is sure to be one unforgettable school field trip, this TV show stars one familiar face: Robert Sheehan, who you may recognize as Klaus from Umbrella Academy.

The Last Bus Season 1 arrives on Netflix on April 1.

Based on Guillermo del Toro’s live-action robot movie Pacific Rim, the animated series returns for its final season this month. Season 2 will see Mei, Boy, Hayley, and Taylor on the Atlas Destroyer as they battle a bloodthirsty cult on their way to Sydney.

Pacific Rim: The Black will debut all Season 2 episodes on April 19.

Russian Doll is coming back with a new time-tripping tale. In Season 2, Nadia (Natasha Lyonne) must confront her family’s history to get out of another dangerous cycle. Along with Lyonne, Greta Lee and Charlie Bartnett return in the second season with Chloe Sevigny, Annie Murphy, and Sharlto Copley joining the cast.

The time-travel series is expected to release all seven episodes of Season 2 on April 20.

Yakamoz S-245 is a new sci-fi series from Turkey debuting on Netflix this month. It follows a marine biologist’s fight to survive after a catastrophic event on Earth. The series is set on a submarine with the crew working on a research mission that might not be all that it seems.

This thrilling sci-fi series will make its streaming premiere on April 20.

Sci-fi and superhero movies on Netflix in April 2022

Director Richard Linklater returns to animation in a new Netflix original movie. Apollo 10 1/2 A Space Age Childhood mostly takes place in 1969 Houston, with a man telling stories of his life, including a journey to the moon, as a 10-year-old boy. Full of nostalgia and beautiful animation, Apollo 10 1/2 also boasts a voice cast that includes Glen Powell, Zachary Levi, and Jack Black.

From the Netherlands, Captain Nova is a sci-fi family adventure movie about a fighter pilot who lives in a post-apocalyptic future. That is, until one day, she travels back in time, becomes her younger self, and tries to prevent the global catastrophe that disrupted her future.

Bubble is a new sci-fi anime arriving on Netflix this month. Set in an abandoned version of Tokyo afflicted by gravitational abnormalities, the story follows a young man who meets a mysterious girl. Their meeting sparks a new journey that will change their lives.

The anime film premieres worldwide on Netflix on April 28.

Spike Jonze and Joaquin Phoenix make movie magic in the contemporary sci-fi classic, Her. Phoenix plays Theodore, a man longing for a partner until he acquires an AI companion, Samantha, voiced by Scarlett Johansson. The movie questions our relationship to technology while also meditating on how it may evolve with our needs and desires in an ever-changing world.

Her will be available to stream on Netflix on April 1.

Christopher Nolan’s Inception is one of the best science fiction films of the 21st century. Innovative and ambitious, you can argue that Nolan has yet to match the energy and imagination of his Leonardo DiCaprio-starring thriller. Thankfully, we can experience it over and over again now that it’s back on Netflix.

Inception will be available to stream on April 1.

With Marvel Studios rebooting Blade with Mahershala Ali, there’s no better time than now to revisit Wesley Snipes’ action trilogy. 1998’s Blade was a game-changer, offering up a hyper-violent vampire action hero that we had never seen before. Clearly, we wanted more, as the first movie received two sequels — all of which are arriving on Netflix this month:

All three Blade movies will land on Netflix on April 1. While we don’t know long they’ll stay on the streaming platform, we’re confident they’ll remain until the end of April, at the very least.