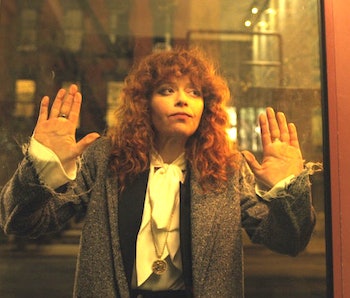 Time to get back in the loop. In 2019, Netflix released the Groundhog Day-esque Russian Doll, and fans are eager for more. Starring and co-created by Orange Is the New Black’s Natasha Lyonne, the series follows Nadia, who keeps reliving the same night: the night she dies. But just because she seemingly solves one problem doesn’t mean her story’s over, does it?

Lyonne and co-creator Leslye Headland hope not, as the pitch was originally for three seasons, they revealed to The Hollywood Reporter. Read on to find out what to expect from Russian Doll Season 2 and beyond.

What happens at the end of Russian Doll Season 1?

Season 1 follows Nadia on her fatal Groundhog Day night, but early on in the series, she learns she’s not the only one stuck in a loop. So is Alan, played by Charlie Barnett. We later learn that Alan originally died from committing suicide and that whenever one of them dies, the other one also immediately drops dead.

As the show continues, the two of them work together to solve the mystery and save each other’s lives while the world around them begins to collapse. Eventually, they manage to break the loop and avoid death.

Will there be a Russian Doll Season 2?

Yes! After a bit of speculation, Netflix formally renewed Russian Doll for another season on June 11, 2019. Leslye Headland and Natasha Lyonne had previously said they had a story planned out for three seasons, and it looks like Russian Doll will be two-thirds of the way there!

What is the Russian Doll Season 2 release date?

Production originally began in March 2020 before shutting down due to the coronavirus pandemic. It took over a year before filming actually resumed in March 2021. Given the Groundhog Day nature of the show, some speculated that Season 2 would drop in February 2022. However, it wasn’t until March 2022 that Netflix finally shared when Russian Doll would be returning for its second season.

Is there aRussian Doll Season 2 trailer?

On March 7, 2022, Netflix released a short teaser for Season 2 when they announced the release date. You can watch it below.

There is not a full Season 2 trailer yet. The Season 1 trailer dropped about a month before the episodes did, so we can possibly expect a bigger preview closer to March 20.

How many episodes will there be in Russian Doll Season 2?

We don’t know, but since its creators pitched the series as three seasons to Netflix originally, it’s possible they planned each season to be about the same length. Season 1 was eight episodes long, and if there is a Season 2, it seems likely it could have the same number of episodes.

What will the Russian Doll Season 2 plot be?

Since we don’t know much about Season 2 yet, we can’t say much about the plot. However, it seems safe to assume that Lyonne’s Nadia will play a significant role, even if she’s not necessarily the main character.

“When initially pitched, Nadia was a presence throughout all three of them,” Headland told THR. “But it was not in a very conventional way, if that makes sense. She was always a presence, as we knew Lyonne would always be the beating heart and soul of this show. Whether she was being haunted or she was haunting the narrative, she would be there.”

It sounds like Nadia might not be the main character in Season 2 and beyond, though she could still play a key role in guiding whoever Russian Doll decides to focus on next. This could also give the show a chance to explore the rules of this universe, which are only hinted at in Season 1.

However, when asked by the same publication later in the year about whether Russian Doll Season 2 would stick to their original plan, Lyonne answered, “In many ways, yes. I see it quite concretely, and it will be interesting to see what evolves. The beauty of the power of the writers' room is that Alan was a very different character in the original pitch and pilot. Month two of the room is where he really came alive. Before then, he had been a whole variety of other figures, and now, looking back, imagining that show without Alan is almost impossible. Because of that experience, I know there has to be space left open for something beyond my limited imagination in this moment to know if that is still where the series begins, middles and ends."

Who will be in the cast for Russian Doll Season 2?

Little is known about who will be returning alongside Natasha Lyonne’s Nadia for Russian Doll Season 2. But comedy fans will see at least one familiar face entering the world. Annie Murphy, who recently won an Emmy Award for her role in Schitt’s Creek, joins the cast, having been seen on set during filming.

More like this
Entertainment
Sep. 13, 2022
Everything we know about 'Dark' follow up '1899'
By Dais Johnston and Mónica Marie Zorrilla
Culture
Sep. 20, 2022
5 amazing sci-fi shows and movies leaving Netflix in September 2022
By Robin Bea
Culture
Sep. 16, 2022
You need to watch the best cult thriller of the year on Netflix ASAP
By Dais Johnston

This article was originally published on Feb. 4, 2019