Dancing in the Moonlight

“We Didn’t Choose This Life, We're Just Living In It.” 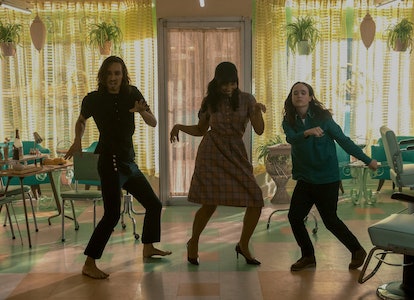 The Umbrella Academy may have stopped an apocalypse and saved humanity, but as Seasons 1 and 2 of the hit Netflix series make clear, the mysteries and hijinks never stop for the super-powered Hargreeves siblings. We’re sure Umbrella Academy Season 3 will be just as full of twists and turns, leaving us with even more questions than answers yet again.

But in the meantime, we can’t help but wonder what might happen in Season 3. (Major spoilers ahead for The Umbrella Academy Season 2.)

Season 2 ended with two shocking twists: Ben is alive, and the Umbrella Academy has been replaced by The Sparrow Academy thanks to some time-travel/multiverse shenanigans. Both cliffhangers truly upended the Hargreeves’ lives once again, and we expect Season 3 to address these turn of events in several possible ways.

But before The Umbrella Academy returns June 22 on Netflix, let’s attempt to answer Season 3’s biggest questions and theorize what might come next for Luther, Diego, Allison, Klaus, Five, and Vanya.

Few details are known about the plot for The Umbrella Academy Season 3. However, the third season’s episode titles were released last fall and they hint at some possible avenues the upcoming season might take. The titles for all 10 episodes are as follows:

It’s the finale’s title that clues us into where Season 3 may have found its inspiration: “Hotel Oblivion” is the title of the third issue of The Umbrella Academy graphic novel series. In an interview with Collider, series star Emmy Raver-Lampman, who plays Allison Hargreeves, says the season will run adjacent to the graphic novel story. So the events of “Hotel Oblivion” might be more of a blueprint for Season 3.

The hotel in question is a prison created by Reginald Hargreeves (adopted father to the Umbrella Academy) to house all the villains his superhero team captures. In the comics, the villains escape from the prison, which is located on another planet. (Sidenote: is it possible in the show Oblivion is located on the Moon, which would explain why Reginald is so obsessed with the Moon in the first place?)

Either way, if all those villains escape from their prison, it will mean chaos, which leads to our next theory…

4. The Sparrow Academy and the Umbrella Academy will join forces

Here’s a quick rundown of the Sparrow Academy:

Based on their initial confrontation at the end of Season 2, it seems like the two groups will be adversarial — at least at first. However, there’s good reason to believe they’ll eventually team up.

As we mentioned above, at one point in the graphic novels, the villains all escape the Hotel Oblivion, which seems likely to happen in the show too. Considering that both superhero teams have likely dealt with the same bad guys in their respective timelines, a jailbreak could be the thing to bring these rival groups together.

3. Reginald Hargreeves might not be totally evil after all

Reginald still largely remains a mystery heading into Season 3 of The Umbrella Academy. His demise was the catalyst for bringing the former superhero kids back together in Season 1. Since then, we’ve been handed crumbs of evidence that there’s more to this eccentric and troubled character.

Each new piece of information only brings more questions, and none more than the moment in Season 2 Episode 9, “743,” when Reginald confronts the Majestic 12, a secret organization with strong political influences. It’s during this meeting that Reginald reveals his true identity… as an alien.

Reginald’s alliance with the Majestic 12 is transactional. He supplies them with alien technology so America can beat the U.S.S.R. to the Moon, and in exchange, his interest in “the dark side of the Moon” remains untouched. When one of the members threatens to expose his identity, Reginald removes his human mask and murders them in his alien form.

In Season 1, he technically tried to stop the apocalypse (though it was an apocalypse he helped create). In Season 2, however, it became clear just how questionable his morals really were, especially when he met his future-adopted children and pretty much spent the whole time denigrating them.

There’s still too much mystery surrounding Reginald to determine his actual motives. Whether he’s a true villain or not, he’s still a terrible father. However, with this new timeline, he’s alive and well in 2019, which means more answers are sure to come.

2. The Umbrella Academy has doppelgangers in the new 2019 timeline

When Five (Aiden Gallagher) brings his siblings back to 2019 from 1963, he creates an off-shoot of the original timeline. In this new version of the show’s present, the Sparrow Academy exists, while the members of the Umbrella Academy were never adopted by Reginald. (Presumably because he met them in the past and didn’t much care for them.)

But if the Umbrella Academy were never adopted by Reginald, logic dictates they’re still out there in the new 2019 with their birth mothers. The team as we know it is displaced from their own time.

We have seen an instance of doppelgangers in The Umbrella Academy before. Season 2 takes place in 1963, in the days leading up to President Kennedy’s assassination. The older version of Five was once tasked with carrying out the assassination. In “743,” Five confronts the “adult” version of himself in order to get his hands on the other Five’s briefcase.

So it stands to reason that in Season 3, the Umbrella Academy will meet versions of themselves who were never adopted by Reginald. The question is: how will that change them?

1. Lila will be the Umbrella Academy’s ultimate wild card in Season 3

Here’s what we do know about Lila:

Lila officially turns against The Umbrella Academy in the Season 2 finale, but in the episode’s climatic barn scene, she’s confronted with the truth about her adoptive mother. Lila departs the barn with The Handler’s briefcase and could have theoretically used it to travel anywhere. However, her whereabouts are less important than her motives now that she knows the truth about her mother.

But after Five runs back the clock, the scene plays a bit differently — Five disarms The Handler before she can murder the Umbrella Academy, leaving Lila a chance to get clarification about Five’s accusations. However, before The Handler can answer, she’s murdered instead. The disruption gives Lila the opportunity to grab the briefcase and disappear.

The first timeline saw a potential for Lila to embrace the Umbrella Academy as her family, though that’s a bit hard to do when everyone was dead. The second timeline leaves everyone alive, but the emotional fallout between The Handler and Lila that would have led Lila to ally with the Umbrella Academy is disrupted.

With Lila wandering across time, she remains a wild card for the Umbrella Academy (as well as The Sparrow Academy). She has a briefcase, but that also means she’s likely on the run. She could arrive at any moment with a totally unexpected plan that could hurt or help the Hargreeves.

Whether it's Lila, the Sparrows, Reginald, or all of them who end up stirring more trouble for the superhero siblings, The Umbrella Academy Season 3 is shaping up to be an exciting new installment in Netflix’s his superhero show.