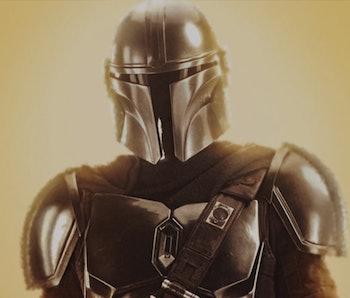 After two seasons of The Mandalorian dancing around the obvious, it took a special episode of spinoff series The Book of Boba Fett to finally blurt it out. In Episode 5, “Return of the Mandalorian,” the characters discuss the legendary mythosaur.

“The songs of eons past foretold of the Mythosaur rising up to herald a new age of Mandalore,” the Armorer tells Din Djarin. “Sadly, it only exists in legends.”

But what is a mythosaur in Star Wars and what is its significance to this story? Let’s dive in.

What is the Mythosaur in Star Wars?

In short, mythosaur are an extinct species of giant dragon-looking creatures that were tamed and ridden by ancient Mandalorians. Back in Season 1 of The Mandalorian, Kuiil teased Din for not being able to ride his blurrg, pointing out that Mando’s ancestors rode mythosaurs.

The mythosaur skull also serves as the symbol of the Mandalorian people. According to Star Wars canon, that’s about all we know right now. However, if you look into the non-canon Legends there’s more to discover.

The Mythosaur in Star Wars Legends

According to Star Wars Legends, the mythosaur were native to the planet Mandalore and dominated their world until the arrival of the Mandalorians. Each mythosaur was absolutely massive. In some cases, they’re described as being as large as a small city. They also possessed large horns and sharp teeth.

When the Mandalorian people first arrived on the planet, they hunted the mythosaur as a sort of test of strength. Eventually, they wiped out the entire once-dominant species. However, the Mandalorians continued to use mythosaur bones to make weapons, establishing the creatures as a key symbol of their culture.

Shortly before the fall of the Galactic Republic, one Mandalorian built a theme park on the planet that featured a giant reconstructed replica of a mythosaur skeleton. The park never opened. It was later sold to an Imperial slaver and become a base for the Empire’s occupation of the planet Mandalore.

What the mythosaur means for Mandalorian Season 3

So will the mythosaur actually rise up from extinction like the Armorer hints? It would be pretty incredible to see a living mythosaur in action. That would also be an impressive way to top the krayt dragon battle from Mandalorian Season 2.

Book of Boba Fett is streaming now on Disney+.