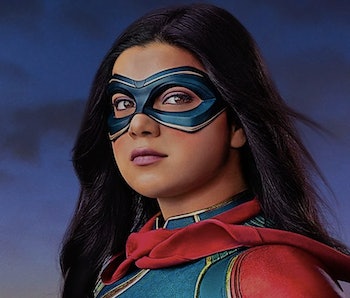 We haven’t seen the last of Kamala Khan. After Ms. Marvel’s shocking finale reveal, the Disney+ series has one more surprise in store. In a post-credits scene, Ms. Marvel gives us a major Avengers cameo that also sets up one of the most exciting team-up movies in Phase 4 of the Marvel Cinematic Universe.

At the very end of Ms. Marvel, we see Kamala Khan attempting to relax at home — although she’s still wearing her superhero costume. Suddenly, her mysterious bangle starts to glow, and a second later, Ms. Marvel is gone. In her place is another superhero entirely: Captain Marvel (aka, Carol Danvers), who crashlands through the door of Kamala’s closet.

After brushing herself off and surveying the damage, Danvers quickly realizes she’s in the room of a girl who’s obsessed with Captain Marvel. She seems concerned, but before anything else can happen, Ms. Marvel’s post-credits scene comes to an end as text on the screen confirms that Ms. Marvel will return in the upcoming MCU film The Marvels.

We’ll get to that in a second, but first, we have some questions to ask (and hopefully answer).

Where did Captain Marvel come from?

We don’t know, but the answer is probably somewhere in outer space, where Carol Danvers seems to be spending most of her time. It’s possible that Danvers found the matching bangle to Kamala’s in a pair somewhere out in the cosmos and that caused them to switch places. After all, Ms. Marvel has already hinted that the bangle could be Kree technology, and Captain Marvel knows all about the Kree.

Where did Kamala Khan go?

Same answer. While we don’t know for sure, we have to assume they switched places, which could mean Ms. Marvel is now stranded somewhere out in space. Her superpowers should be enough to keep her safe, but we’re guessing she’ll need Carol Danvers’ help to get home.

When does the Ms. Marvel post-credits scene take place?

When is The Marvels coming out?

For this one, we actually do have an answer. The Marvels is scheduled to premiere in theaters on July 28, 2023. Of course, Marvel Studios does occasionally shuffle its release dates around, but for now, you can expect to see Kamala Khan and Carol Danvers in a little over a year from now.