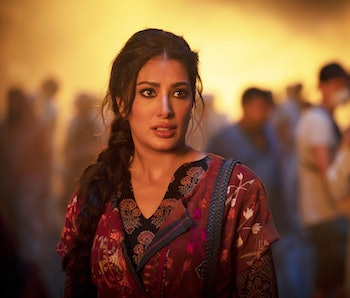 When Mehwish Hayat visited the U.S. from her native hometown of Karachi, Pakistan back in 2014, she brought home a Ms. Marvel comic.

“I really hoped Marvel would make a film or series of it even then,” Hayat tells Inverse. “I was thrilled when the series was announced and tweeted how much I looked forward to it. I tweeted again when they cast Iman, applauding Marvel’s decision to cast a Pakistani girl. It never even crossed my mind that a year later I’d be a part of the series. God really does move in mysterious ways.”

“Somebody described the series as a love letter to Karachi and to Pakistan. That is exactly how I feel.”

Starring Iman Vellani as the Muslim superhero in the MCU, Ms. Marvel fuses Pakistani-American culture and history with your typical comic book shenanigans — elevated further with a pop of color rarely seen in Marvel’s dreary cinematic universe. Hayat, an accomplished actor and singer, plays Aisha, Ms. Marvel’s great-grandmother and an interdimensional “Djinn” who is tragically stabbed by her rival before she can flee. Her mystical bangles, however, are later passed down to her great-grandaughter, Kamala Khan.

Hayat spoke with Inverse about what it was like to portray a superpowered Pakistani in a Hollywood production, the importance of brown girl representation in Ms. Marvel, and what her plans are next with Marvel Studios.

How do you think Ms. Marvel handled Pakistani culture, both in the scenes in Jersey City and in Karachi?

I still cannot get over how authentically the scenes with the family in Jersey and in Karachi were handled. I have never seen our lives so well portrayed on the screen. This is exactly how we live, and I am sure that all young people who’ve grown up in Muslim diasporas in the U.S. and elsewhere would be cringing at how accurate this representation was. The tiny touches and nuances were spot on and showing the wider audience celebrations such as the festival of Eid and a wedding was such a wonderful insight into our culture. As far as the Karachi scenes were concerned, I’ve never seen my hometown so lovingly shown before. Somebody describes the series as a ‘love letter to Karachi and to Pakistan.’ That is exactly how I feel.

Ms. Marvel has been celebrated for the discussion and portrayal of The Partition. How did you feel about it? Was it surprising to see an American TV show tackle that subject?

We’ve all grown up hearing stories about the Partition from our grandparents who lived through it. My own ancestors migrated from India to Pakistan. I realized that is a very turbulent period of our history, the effects of which are still being felt today almost 75 years later. The enormity of what happened never really hit me till I stood on that railway station set for the first time.

I was in floods of tears. When the camera cut, I would be able to retreat to my comfortable hotel room— millions who went through Partition were not afforded that luxury, and this was their life. It was very surprising to me that Marvel decided to show this part of our history, but I am so thrilled they did. It has given young people and Western audiences a real understanding of what happened all those years ago and what people went through.

How did you get cast for Ms. Marvel? Was it a traditional casting call to audition, or were you requested by Marvel and Disney?

I think that once Disney had made the bold decision to cast actors from Pakistan, my name must have cropped up somewhere along the way. I just got an email out of the blue and after signing numerous NDAs got a script to do a self-tape. I’d never done one of those before and was sure I’d blown it. But literally, an hour or so later I got an e-mail to put Disney in touch with my management and before I even knew it, I was in Thailand in quarantine. No idea what my character was at that point because the scripts were still being worked on. It was at the first read-through that I learned about Aisha and was immediately taken with her. Love at first sight, you might say!

“The enormity of what happened never really hit me till I stood on that railway station set for the first time.”

What was it like to not only represent Pakistan for a U.S. production but also to work alongside other famous stars from the region?

We have such a wealth of talent in Pakistan that very rarely gets the opportunity to show what they are capable of to an international audience. Of course, it was a real responsibility to effectively represent my industry on the world’s biggest platform and I hope that if nothing else all of us on the show from Pakistan have given producers in Hollywood the confidence to cast more people from here. Likewise, I hope that it gives young people in Pakistan the confidence to spread their wings and look further afield. Working with other famous stars from the region was a great experience. It was just a crying shame in my view that it took a Hollywood production set in a third country to bring us all together. The politics of the region are far too complex, but we as artists have a real responsibility to bridge divides, not create more differences.

Why do you think it is important for young women to see themselves represented in Ms. Marvel with a Pakistani and Muslim superhero?

I think that it is very important that all ethnicities have heroes they can relate to and look up to. This is why diversity in the media is so important. Growing up, I would have loved to have a series like Ms. Marvel to talk to me and my experiences and show me that brown Muslim girls can also be superheroes. But I am glad that it now exists to inspire my young nieces’ generation and make them believe in the superhero that exists in everyone. Better late than never, as they say.

What else is on your slate? Would you consider being in a U.S. television show or movie again?

I have been working on a project for the last four years which I am also producing that I had hoped would have been my first Hollywood project, but Ms. Marvel beat us to it — not that I’m complaining. I am really hoping we’ll be able to do it early next year. Just tying up a few outstanding things before we go into pre-production.

Also, I am directing my first film, a rom-com which I am hoping we’ll do this winter. I cannot wait to share more about these projects. I think that in answer to this question, I’m an actress and what appeals to me is the script and how much the character challenges me. It is immaterial whether that is in Pakistan, Iran, South Korea, or Hollywood. Though having said that, I've been somewhat spoiled by working with Disney and would love to work in U.S. television or a movie again.

Ms. Marvel is available to stream now on Disney+.