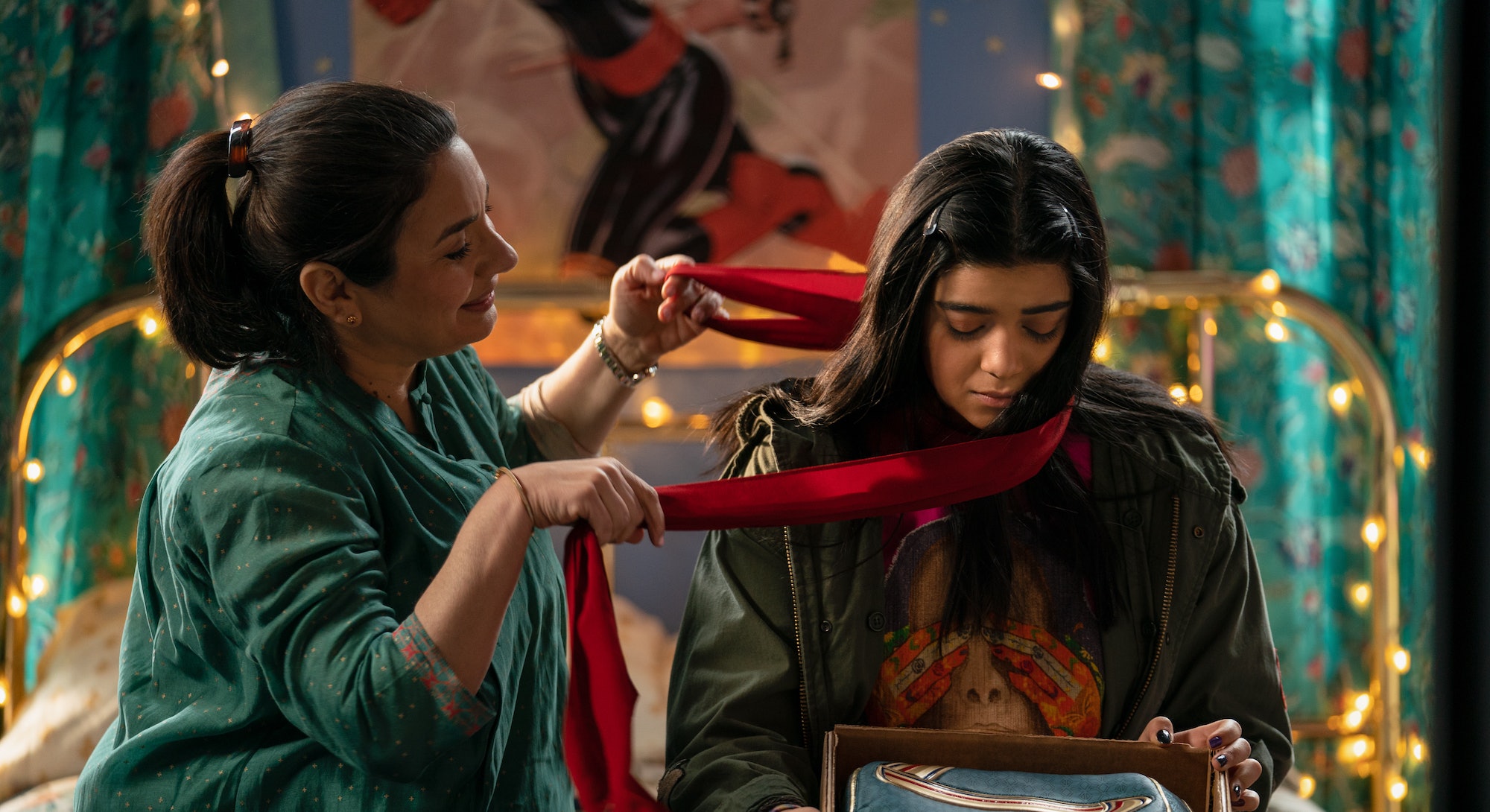 Ms. Marvel has a few tweaks from the comics, where Kamala was a descendant of Jack Kirby’s Inhumans. Head writer Bisha K. Ali tells Inverse that making Ms. Marvel’s powers more personal, as opposed to something of the Marvel Universe, is meant to highlight what makes Kamala so different in the first place.

“What makes Kamala special in all comics, not just talking about Marvel, is the fact her family is there,” Ali tells Inverse via Zoom. “They’re a good family who is supportive of her.”

For most of the show’s length, audiences are told Kamala’s powers — unlocked by a mysterious family heirloom — is because of her family’s relation to ancient beings called Clandestines, a.k.a. Djinn, which are spirit creatures from pre-Islamic Arabic mythology. While Ms. Marvel has a mind-blowing twist saved for its last scene that complicates things, family remains the focus.

In defiance to most origin stories involving sworn vengeance for dead parents, Ali says Ms. Marvel was a chance to explore a superhero whose family were aware and even involved in her superhero double-life. “We were leaning into that. Not only is her family kind of thematically her superpower, but they should also be her power,” Ali says. “It felt like such a great opportunity. That opened up every avenue you see in the show.”

The concept of family also enabled Ali to let Ms. Marvel be a universally-appealing show alongside its specificity of Muslim-Pakistanis in modern America. “There’s a different version of the show that I’m sure would have been fantastic, about her not fitting in as a result of what marginalizes her in the West,” Ali says. “But I’m not interested in an ‘us-versus-them’ story. I’m interested in an ‘us’ story. What that means was going deeper into the family of it all, and how that manifests her powers.”

In an interview with Inverse, Ms. Marvel head writer Bisha K. Ali unpacks the show’s mythological lore that puts Arabic myths and comic book IP side-by-side, how she included difficult subject matter like the surveillance of Muslim communities and the Partition of India, as well as how certain Marvel mutations found a way into the show.

One of the biggest changes you’ve made to Ms. Marvel in the MCU is the fact her powers are rooted in family, and not her Inhuman or mutant DNA. What encouraged you to reimagine Kamala’s powers in this way?

Broadly in the universe of superheroes, what marks [Kamala] in a really incredible way is her family. The story I wanted to tell had to be deeply interconnected to those themes. So even her powers had to be connected to what she’s figuring out about herself, tied to family and the community surrounding her. That just made perfect sense to us.

I think it’s nice to see a superhero with a really robust support system.

We made her super suit pieces come together from a different member of her family. Muneeba made that suit for her with Sana’s input. The Red Dagger gave her the sash. The color scheme is from Aisha’s waistcoat. The mask is from Bruno. Her family is integrated into her superhero identity. No matter where she goes or what she does in the future, they’re always with her.

How did you reimagine the concept of Djinn for the MCU?

Growing up, for me and a lot of the other Pakistani writers in the room, it’s the thing you say when someone’s behaving differently or there’s something you can’t explain. It’s got a negative connotation. These are nightmares. Because we’re so specific in our storytelling, there is nothing worse Kamala can believe. She says to Bruno, “Obviously I can’t be a superhero!” because that’s how low this idea brought her. We were drawing from our cultural background.

That thematically ties into this idea that runs throughout the entire show: the stories we tell each other, the stories we believe about ourselves, and how they affect how we see ourselves. This is about listening to each other. Kamala bearing witness to Aisha’s story is the healing of all of that, bearing witness to the truth of the people in your family have of themselves.

Given the history of orientalist stereotyping in Western media, were there concerns about incorporating Djinn into Ms. Marvel?

Of course. That’s the thing that’s so hard. Because of Orientalist tropes, we are limited in our storytelling because of what people who aren’t us have done. This is the double-edged sword of a show like this. But if anyone should get a chance to “mess it up,” it should be us.

These elements are minefields. We have to be careful. But we get to tell a story from our community because we are writers from that community. I believe nothing should be off limits to us because we’re approaching it with respect and honor. Maybe we should have gone into detail, but in Episode 4, Walid tells her, “If Thor turned up, we’d call him Djinn.” That’s how we speak.

When I think about Kamala’s journey, she doesn’t see her powers as a gift. They bring law enforcement to the masjid. They smash up her brother’s wedding. They make her feel like she doesn’t know how to balance her life and negative consequences happen. Her arc in the story is about how you have to be careful what you dream of.

There are some connections teased between the Clandestines and the Ten Rings. Can you elaborate on what those connections might be?

I don’t know what you’re talking about. I didn’t see the scene you’re referring to. Good luck in your endeavors. [laughs]

The finale confirms that Kamala is a mutant. How does something like this happen behind the scenes at Marvel?

I can’t believe it myself. That came in near the end. That wasn’t a “Bisha thing.” It was a quiet hope and a dream no one at Marvel heard at the beginning. The idea was so impossible to us. I don’t think we spoke to any execs about it. But it’s really [Ms. Marvel co-creator] Sana [Amanat] and [Marvel Studios President] Kevin [Feige] who came together on that. I got the call from them. I can’t say anything else that I have nothing to do or [have] knowledge of.

How do you feel about your version of Kamala Khan as the first mutant given the importance of mutants to Marvel?

As a nerd from that generation, where that soundtrack has such an emotional, visceral impact, I’m thrilled. I don’t know what it means beyond our show. All I know is our little show. I’m excited to find out as much as the fans.

What was your writer’s technique in making a complex and difficult thing like Partition of India easy to understand for a mainstream Marvel audience?

What I think helped land was the fact Kamala doesn’t know a huge amount herself. Kamala is the person we’re invested in. We’re in her head from the moment we see her. We’re figuring it out with Kamala every time it gets brought up. Kamala’s learning in real-time as we’re learning. That’s how we structured it.

When we get to Episode 5 and we have that opening whistle-stop tour through some of the very basics of what happened in Partition, we had to be mindful. We discuss the scale and truth of it in voiceover, about the violence of it all. We don’t show that, because at the end of the day this is a Disney show with a broad reach. We’re not going to show hyperviolence, but it was that horrific. If you’re listening, adults are picking up that this is much worse than what we’re showing. And what we’re showing is affecting, I think. That’s how we brought the audience up to speed as you’re traveling through informationally on an emotional level with Kamala.

Whether it’s Damage Control or Carol Danvers, what’s the process for including other characters or power platers from the rest of the MCU?

From the perspective of the writers and me, we’re more focused on our main character, the people around her, and what their arcs are relative to each other. We already had a character who was going to represent the over-policing of the Muslim community. That wasn't Damage Control from the start.

As I'm developing scripts with the writers, we're checking in with executives often. They’ll come in and say, “Hey, what about this?” and provide us with [something from the MCU]. I don't know what's happening in the MCU. They're not gonna tell me because of my blabbermouth. It was their input finding places of interconnectivity wherever they could. Sometimes there might be something that comes up, and we'd ask. But generally, I'm so focused on crafting a complete story specific to my character. That's the business of Marvel above my paygrade. They come in to steer us and give us cool things that provide that connectivity without having to tell people like me the whole story.

The profiling of Muslim communities by government authorities is explored unambiguously in Ms. Marvel. What does telling this story using the metaphors of superheroes accomplish?

It’s putting this conversation on a wider platform. I mean, my goodness, the fact we’ve got Partition in a Marvel show, my brain is still falling out of my head. But it’s talking about things that are important not to just me, but to every writer on the show.

These are things we talked about from the beginning. One of the questions I asked every writer on day one is, “What are your biggest hopes for this show? What are your fears?” That’s how I wanted to start: discussing painful things and making a space for writers to talk openly about things that are important to us. As a result of that and these writers’ bravery, we said, “This is what we want to talk about.” The fact we get to tell the story on such a large scale, it’s something I’m still getting my head around. It felt very personal writing it.

Any thoughts or hopes for Ms. Marvel Season 2? Presumably, she has at least another year of high school, right?

I don't know anything. As a writer, I had a really specific story that was burning in me to tell, and I told it with Kamala. I'd be so happy and proud that the world we've created gets carried on by another creative in the future. If there's a Season 2, I'd be so proud. This show is about community, and it took a community of creatives to make it. I'm excited to see who from that community is going to tell more of Kamala’s story in the future.

Inverse may receive a portion of sales if you subscribe to Disney+ through the link.