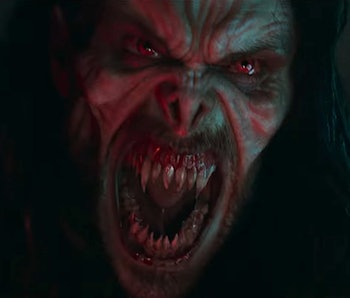 Morbius is the wild card of superhero movies. The Jared Leto-starring “Living Vampire” story is firmly seated within the Sony Spider-Man continuity alongside other spin-offs like Venom, but after several apparent MCU references in the trailer and the multiverse-merging hijinks of Spider-Man: No Way Home, could this be the first-ever secret MCU movie — and one that establishes a huge MCU team-up? A post-credits leak suggests just that.

Redditor nsanespyro translated a video by French YouTuber landri. who apparently saw a pre-release screening of Morbius and described the two post-credits scenes included. While Michael Keaton’s Vulture appears in the Morbius trailer, his role was unclear. Apparently, these post-credits scenes establish that his villain, first seen in Spider-Man: Homecoming, was accidentally sent to the wrong timeline after the events of No Way Home.

According to the leak, the first post-credits scene shows Adrian sent back to a prison cell in the Morbius universe instead of in his home dimension. And, because Toomes committed no crimes in this universe, he’s released from prison.

That sounds tame, but the exciting part is in the second post-credits scene, which shows Michael Morbius driving through the desert until he sees something in the distance that causes him to get out of his car and investigate. He finds the Vulture, who asks him if he wants to unite and get revenge on Spider-Man.

Even if this is the only glimpse of Michael Keaton we get, this is still a huge reveal for MCU fans. If Morbius and the Vulture team-up, that means only one thing: The Sinister Six. And if Morbius is part of the MCU, the previous Spider-Man villain team-up we saw in No Way Home could be just the tip of the iceberg.

This isn’t the only evidence we have backing up this leak. Previous leaks have suggested the majority of MCU and Spider-Man references seen in trailers have been cut from the film, so remaining Easter eggs being relegated to the post-credits makes sense. Plus, the Venom post-credits scene in No Way Home suggest the line between the current Sony and MCU universes is blurring.

Sinister Six rumors have plagued the Spider-Man universe for as long as it’s existed. Maybe this movie will finally bring them to fruition, and make the Marvel Cinematic Universe even bigger than we previously thought possible.

More like this
Entertainment
Jan. 26, 2023
Corey Stoll could have the chops to make a live-action M.O.D.O.K. work
By Mónica Marie Zorrilla
Entertainment
Jan. 17, 2023
Guardians of the Galaxy 3's Adam Warlock reveal may be a big misdirect
By Eric Francisco
Entertainment
Jan. 25, 2023
The MCU could bring back a hero from its most underrated TV show
By Dais Johnston
LEARN SOMETHING NEW EVERY DAY.
Related Tags
Share: