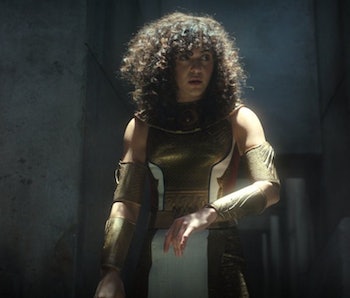 Speculation abounded as to when (or if) viewers would be introduced to Moon Knight’s third canonical alter-ego during his Disney+ series, as well as who (if anyone) Layla, Marc Spector’s wife, would wind up becoming at the end of the season.

Luckily for fans, they were treated to Jake Lockley’s reveal in Episode 6’s end credits, and Layla’s transformation into a version of Scarlet Scarab thanks to her acceptance of a “temporary” position as the hippo goddess Taweret’s avatar.

The Egyptian superhero retains elements of the original comic book character’s costume design in this refreshed and modern interpretation. Her introduction into the MCU might just be a plot device that aids Marc and Khonsu as they battled a freed Ammit and an unhinged Arthur Harrow, but Scarlet Scarab could also make more appearances in future MCU projects.

In the comics, Scarlet Scarab is a protector of Egypt who mostly keeps to himself and focuses on defending his homeland. The alias is first taken by Dr. Abdul Faoul, a professor who winds up with an ancient artifact called the Ruby Scarab that gives him his powers. Faoul leads the Sons of the Scarab during WWII, and later passes on his knowledge to his son, Mehemet. After a brief battle with Thor, who refused to give up the Ruby Scarab after it was given to him to protect by a museum curator, Mehemet becomes the next Scarlet Scarab.

Given that we only saw Layla as Scarlet Scarab for a couple sequences in the Moon Knight finale, it’s difficult to say what powers she has. In the comics, Scarlet Scarab enjoyed superhuman strength and durability, flight, and the ability to sap the power of their foes. We really only see Layla throw a couple punches, but the armor and costume given to her by Taweret are probably imbued with powers, like Marc’s Moon Knight costume.

For now, we can’t say if Layla’s deceased archeologist father was the original Scarlet Scarab. There were, however, small hint throughout the show that Layla would become Scarlet Scarab, including subtle wardrobe choices like scarlet shorts and a scarlet helmet lining. But the most obvious tell was the teeny scarlet scarab beetle drawn on her bandage when Marc was in the “asylum.”

When most of the god’s avatars are assassinated by Arthur Harrow and Ammit, Layla is transformed into Taweret’s champion to move the plot forward in the sixth and final episode of Moon Knight. The introduction of a female Egyptian superhero to the MCU is one of several diverse additions that Marvel has made in recent and upcoming projects, which have focused in particular on the representation of Middle Eastern and Asian characters.

It wasn’t so long ago that the Iron Man trilogy relied on orientalism and negative stereotypes of Middle Eastern people. Today, Scarlet Scarab joins a flock of new MCU superheroes that break the straight white male mold, including the Pakistani-American teen Ms. Marvel, Shang-Chi, several Eternals, and Monica and Maria Rambeau. Marvel’s attempts at representation haven’t been without their hiccups, but they are happening.

The Inverse Analysis— Scarlet Scarab’s future in the MCU might depend on whether Moon Knight is given either a second season or some film appearances. While it felt like Moon Knight started slow, then rushed to get to the grand finale of Episode 6, Layla got a well-deserved heroic moment in what was hopefully more than just a narrative tool to move along a rapid episode and frantically tie-up a lot of loose ends.

Not everything in the MCU needs to be interconnected. Still, it would be fantastic to see May El Calamawy and Oscar Isaac continue to build on their Moon Knight roles in future MCU projects with deeper narratives. Quietly retiring Moon Knight and Scarlet Scarab would be a major loss for Marvel, and the progress the franchise has made in diversification.