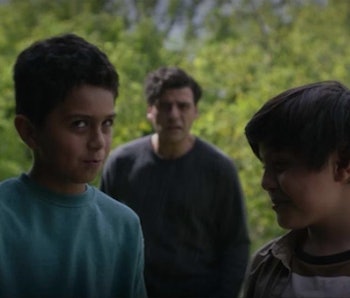 Moon Knight viewers finally received an answer to a nagging question in the series: Who (and why) is Dr. Steven Grant a part of Marc Spector? Spoilers for Moon Knight Episode 5 ahead.

Episode 5, entitled “Asylum,” reveals that Marc manifests Steven as a direct result of grief and trauma — a recurring theme in Marvel’s Phase 4 — that took place in his childhood. Marc’s brother, Randall Spector, drowns in a cave after it floods during a rainstorm, and his mother blames Marc for Randall’s demise. To relieve himself of the psychological torment of his mother’s pointed resentment toward him and her beatings, Marc lets Dr. Steven Grant take over his mind to push the unpleasantness briefly out of his consciousness.

But this origin story of what caused Marc’s Dissociative Identity Disorder (DID) significantly deviates from the comics. For starters, Randall is alive in the source material, and his story in the comics could inspire Moon Knight’s future in the Marvel Cinematic Universe. Here’s how the TV series changes Marc’s story and what it could mean for the upcoming finale.

Marc’s DID develops in the comics due to a convergence of two deeply traumatizing situations in young Marc’s life. The first cause is being scouted out by Khonshu as a potential avatar and establishing a psychic connection to the Egyptian lunar deity as a child.

The second — and one that the Marvel show awkwardly glazes over in Episode 5 — is that a young Marc finds out a close family friend of the family was carrying out antisemitic murders under the convenient disguise of being a rabbi. Marc and Randall had already spent much of their childhood being bullied relentlessly for being Jewish. Marc fights this family friend, but his age and inexperience lead to the murderer’s escape.

Soon after, Marc started to experience DID symptoms, and unlike the relationship that Marc has with Steven in Moon Knight, the fractured personalities in the comics add to his superhuman abilities. Although they cause confusion, they collectively aid Marc in his Moon Knight duties.

The Disney+ series alludes to Marc’s Jewish background by mentioning shivas and the kippah that he tosses to the ground in frustration in Episode 5. But ultimately, Marvel Studios opts to tell a different origin story centered on Marc losing Randall. As noted in one scene from “Asylum,” the specter of Randall still haunts Marc. And if Moon Knight is to return for another season or in another Marvel project, the comics version of Randall may come into play in the Marvel Cinematic Universe.

Randall Spector does not perish as a child in the comics. He eventually meets his demise later in life — and at the hands of his brother.

Marc was fiercely protective of Randall, and the two were close as kids. But soon, Randall — or “Rand,” as he goes by — begins to get jealous of Marc and feels a need to overpower him. As young adults, both Rand and Marc join the US Military and later become mercenaries, often working together on missions. Envy consumes Rand, and he murders Marc’s girlfriend during a gun-running assignment in Italy. In revenge, Marc goes after his brother and launches a grenade at Rand, mangling him.

The incident causes Rand to lose it completely, and he continues working as a mercenary. After taking an assignment in Egypt and finding out Marc and his team were massacred in front of the Tomb of Pharaoh Seti, he enters the tomb and discovers a document that claims to be the will of Khonshu. Rand learns Marc was brought back to life and became Moon Knight, and Rand vows to take his brother’s title away from him and become the deity’s next avatar of vengeance.

While Rand sought to become Khonshu’s next avatar, he had to wait until the moon and stars were positioned just right. When the time finally arrives, Rand enters Moon Knight’s manor, obtains A.I.M. tech (remember them from Iron Man 3?!), and gives himself superhuman powers and the moniker Shadowknight, a dark and eerie version of Moon Knight.

Obviously, this is not the sweet bond the Spector boys seem to have shared in the relatively tame and family-friendly Disney+ series. Presumably, one of the reasons why the show got rid of Randall was to avoid getting into their deeply problematic relationship in the comics. On the other hand, losing Randall was a more straightforward story to help to explain Marc’s DID on Moon Knight.

Could Randall return as a Moon Knight villain?

Given there’s only one episode left of Moon Knight, it seems unlikely Randall Spector would return from the dead this season.

After all, Marc (and Steven) need to resurrect themselves somehow and tie up all of the show’s loose ends, which include defeating Arthur Harrow (Ethan Hawke) and his Disciples of Ammit and making amends with his wife Layla (May Calamawy). Plus, there are more important reveals that fans have been desperately waiting for, such as cameos from Moon Knight’s other persona, Jake Lockley, Bushman, and maybe even Gael García Bernal’s Werewolf by Night.

But if Moon Knight does become a recurring character in future MCU projects or if the series miraculously gets a Season 2, then it’d be a shocking plot twist for Randall Spector to be revealed as alive. It is precisely the kind of a surprise that is on par for Marvel due to the creative flexibility of the “multiverse.”

While we hope the final episode will give us a satisfactory conclusion, Moon Knight has established a new set of characters and storylines that can be further explored somewhere down the line.