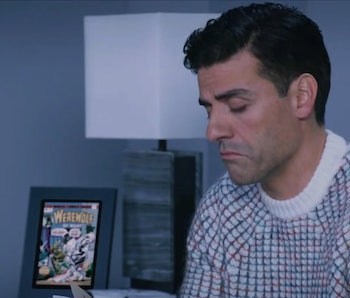 As Moon Knight approaches, rearing its crepuscular-masked head around the corner, so too arrive hopeful fans overanalyzing every short video or teaser trailer unleashed by Marvel. Fans are yearning for straightforward clues as to what to expect in this psychological thriller that star Oscar Isaac has called a “character study.”

Viewers of Marvel’s most recent tease of the six part series, which is set to drop on Disney+ next Wednesday, spotted an overt, in-your-face framed cover of Werewolf by Night No. 32, the first issue in the mid-’70s Marvel monster comic in which Moon Knight makes an appearance. Spectators wondered if this is Disney+’s way of telling us that Werewolf, who will be played by Gabriel García Bernal in Marvel’s forthcoming Halloween special, will be making a cameo in Moon Knight. Or will Moon Knight be making a cameo during the special?

What’s the link between Moon Knight and Werewolf by Night?

As a quick explainer for the uninitiated, the Werewolf by Night comics, which originally came out in graphic novel format in the ‘70s, needed a villain. The evil Committee, a secret organization of ethically dubious businessmen, were hunting Werewolf. After several thwarted attempts at capturing him, they put a bounty on the monster and hired Moon Knight to get the job done.

In Werewolf by Night No. 32, the superhero snares Werewolf, but once he learns the Committee’s scummy true intentions he frees him, keeps his prize money, and flees. Moon Knight became an unexpected hit among readers, and in order to justify his “un-heroic” introduction, Marvel gave him an origin story that included a mental health disorder (described in the show as dissociative identity disorder), a past as a mercenary, and a firm belief that he’s the reincarnated avatar of Khonsu, the ancient Egyptian god of the moon.

The Inverse analysis— Wouldn’t it be exciting if Marvel Studios was blatantly hurling a Halloween Special Easter egg at us this early in the year? While we can’t wait to see Bernal play the comics’ ferocious lycanthrope, it’s possible the comic book’s appearance in the teaser is simply meant to pay respect to Moon Knight’s first appearance.

That nod to the character’s canonical origins and history is certainly important and shouldn’t be dismissed, especially given the implied changes made to Moon Knight’s beginnings and the existential questions raised by Marvel comics appearing in the Marvel universe. However, we shouldn’t necessarily expect a Werewolf cameo in Disney+’s Moon Knight. It’s just as likely that we’ll be seeing a Moon Knight cameo in the Halloween Special — maybe an epic brawl between the two lunar lurkers? — but we have a long ways to go before that can be confirmed.

Moon Knight will debut on Disney+ on March 30.

More like this
Entertainment
Jan. 25, 2023
The MCU could bring back a hero from its most underrated TV show
By Dais Johnston
Entertainment
Jan. 13, 2023
Mike Colter would "entertain" the idea of coming back to Luke Cage
By Hoai-Tran Bui
Culture
Jan. 26, 2023
Michael J. Fox’s strangest movie remains a stupid, ridiculous joy
By Mónica Marie Zorrilla
LEARN SOMETHING NEW EVERY DAY.
Related Tags
Share: