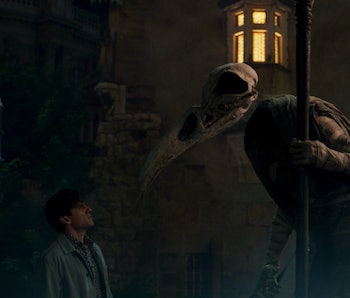 Moon Knight is breaking new ground in the Marvel Cinematic Universe. By introducing viewers to both Marc Spector (Oscar Isaac) and Khonshu (F. Murray Abraham), the Egyptian god of the Moon, the series has established the existence of a new set of MCU deities. The series isn’t keeping its exploration of Egyptian mythology restricted to Marc’s relationship with Khonshu either.

Over the course of just its first two episodes, Moon Knight has confirmed the existence of several other Egyptian gods, including Ammit, who Arthur Harrow (Ethan Hawke) dutifully serves. The series’ interest in Egyptian mythology is exciting on its own, but it becomes even more intriguing when you consider the fact that Moon Knight isn’t the only major Marvel title expected to bring new gods to the MCU this year.

Gods in the MCU — For a long time, the only gods that fans knew existed in the MCU were Norse. Their home, Asgard, is said to be one of the Nine Realms of the MCU’s prime universe. But Moon Knight’s introduction of the Egyptian gods has seriously upset the MCU’s established power structure.

In Marvel’s comics, the Egyptian gods, including Khonshu, all exist in an extradimensional realm known as Celestial Heliopolis, which is secretly located near Earth. Celestial Heliopolis is said to be one of several God Realms that exist in the Marvel Comics universe; there’s also Asgard, as well as Olympus, where the Olympians reside.

Moon Knight, notably, has yet to explore the origins of the Egyptian gods. If the show eventually does so and decides to use the same explanation as the comics, that means Moon Knight may help set up the introduction of the Greek gods in Thor: Love and Thunder.

The Egyptian and Greek Gods — It’s been rumored for a while now that Thor: Love and Thunder will bring Greek gods into the MCU. Those rumors were seemingly confirmed last year when Russell Crowe said he’s playing Zeus in the Taika Waititi-directed Marvel film, although no one else involved in the superhero flick has corroborated his claim.

However, Moon Knight’s introduction of Egyptian gods makes it seem much more likely that Love and Thunder will feature an appearance from at least one non-Norse deity. If the Disney+ show ends up going so far as to confirm the existence of the God Realms in the MCU, then the odds that Love and Thunder actually introduce Zeus and his fellow Olympians will climb even higher.

Who knows? Maybe Love and Thunder will even show its villain, Gorr the God Butcher (Christian Bale), traveling to some of the God Realms. If any MCU villain was going to do so, Gorr seems the most likely candidate.

The Inverse Analysis — The MCU is expanding more rapidly than ever. For their part, titles like Loki and Spider-Man: No Way Home have opened the door for future superhero films and TV shows to continue exploring the MCU’s multiverse. But Moon Knight proves that Marvel’s current expansion plans aren’t just limited to introducing variants and multiversal conquerors.

Thanks to the Disney+ show’s inclusion of Khonshu and his fellow Egyptian gods, Moon Knight has also kickstarted what could be a new age for the MCU, one in which multiple sets of mythological beings are allowed to exist in the same world.