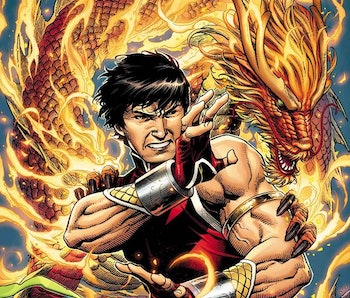 With 156 confirmed cases of the novel coronavirus, or COVID-19 in Australia, Marvel director Daniel Destin Cretton isn't taking any chances. His caution casts doubt over the upcoming release of Shang-Chi and the Legend of the Ten Rings, due in theaters February 12, 2021. That, in turn, could affect the upcoming release schedule for all of the Marvel Cinematic Universe.

Late Thursday, The Hollywood Reporter shared that principal photography of Shang-Chi and the Legend of the Ten Rings has come to a halt on location in Australia. Cretton, who has a newborn baby, submitted himself for testing of COVID-19 and is under isolation at a doctor's recommendation.

A note released by Marvel to the film's crew clarifies that Cretton is not confirmed to be positive or negative for the coronavirus, but is being tested out of an "abundance of caution."

As many of you know, Destin, our director, has a new born baby. He wanted to exercise additional caution given the current environment and decided to get tested for Covid-19 today. He is currently self-isolating under the recommendation of his doctor. While he waits for the results of the test, we are suspending 1st unit production in an abundance of caution until he gets the results this coming week. Second unit and off production will continue as normal. We will reach out to everyone by Tuesday for the latest update.

This is an unprecedented time. We appreciate everyone’s understanding as we work through this.

Simu Liu, who will play the superhero lead, shared his gratitude for Marvel Studios on Twitter. "Grateful to work for a company that is proactive, cautious and empathetic during this difficult time," Liu wrote. "Everyone is in good spirits as we continue to work towards making an incredible film. Stay safe out there, wash your hands, and - of course - don't be racist :)"

The news comes after Tom Hanks and Rita Wilson confirmed they have tested postitive for the virus while on location in Australia, and are currently under isolation. The couple have been in Queensland while Hanks films the upcoming Elvis Presley biopic Elvis. "We have Covid-19 and are in isolation so we do not spread it to anyone else," Hanks wrote in a statement on Instagram. "There are those for whom it could lead to a very serious illness. We are taking it one-day-at-a-time."

Should the coronavirus situation worsen, it is entirely plausible for Marvel/Disney to shuffle its slate. The studio has already moved Mulan, originally scheduled for March 24 and now delayed indefinitely. The New Mutants, a Marvel horror movie acquired from Disney's acquisition of 20th Century Fox, is also delayed yet Just yesterday, Universal Studios delayed the release of Fast & Furious 9 an entire year, pushing the film from its May 2020 date to April 2, 2021.

Out of any studio in Hollywood, Disney seems the most prepared to weather a storm of setbacks. In 2019, the studio grossed a powerful $13 billion with releases like Avengers: Endgame and The Lion King, and it has its own streaming platform in Disney+. It is unlikely big movies like Black Widow (still scheduled for release on May 1) or next year's Shang-Chi will have to resort to streaming. Even as more people are advised to stay indoors and avoid large public gatherings, including movie theaters, a lot of Disney's future plans are in flux

Shang-Chi and the Legend of the Ten Rings comes to theaters February 12, 2021.