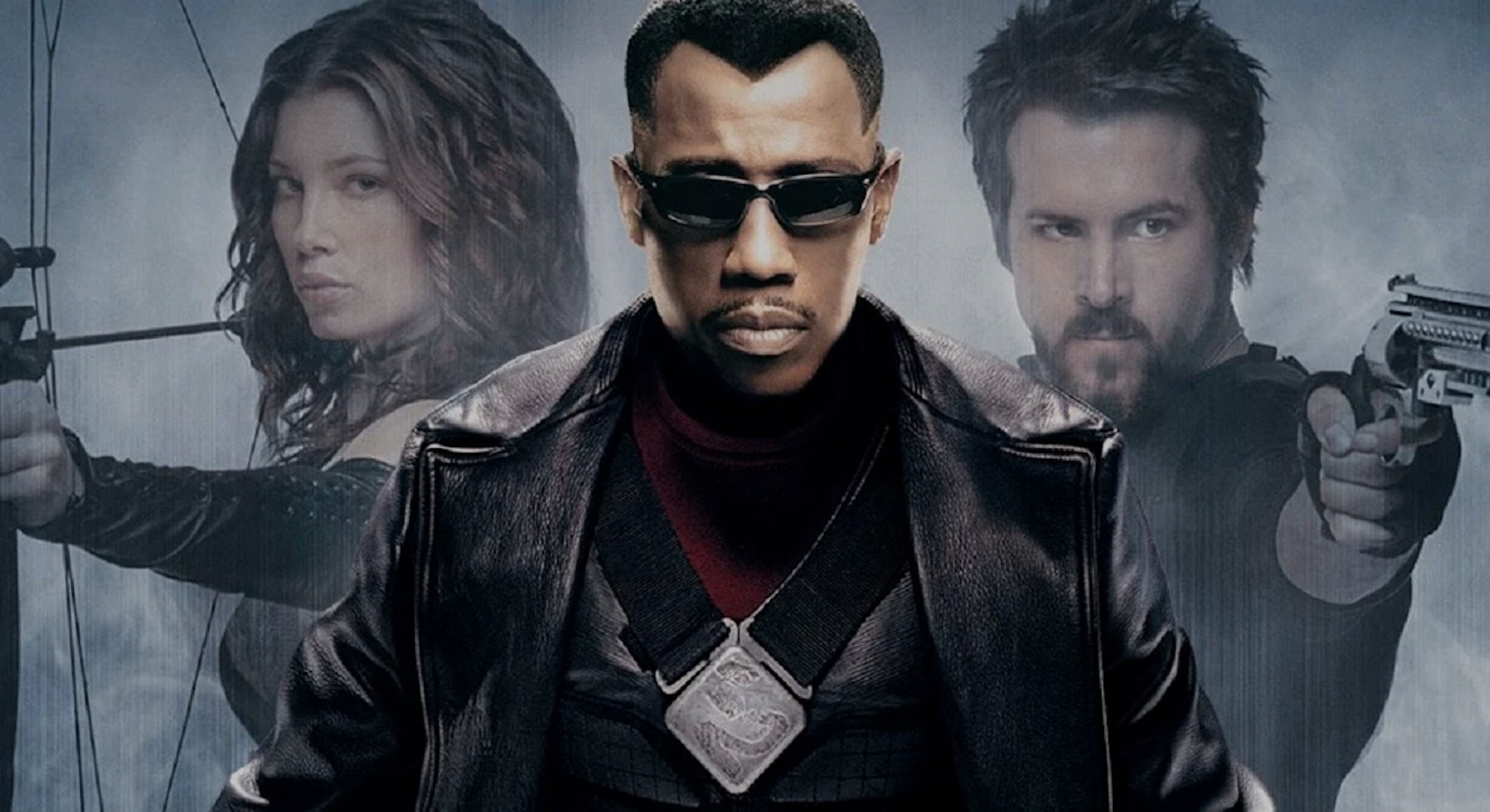 They say the third movie is always the worst. In the case of Blade, that theory stands true.

The first Blade was fun, delightfully violent, with just the right dark and gritty level to keep the audience entertained. Blade II had a truly confusing story, but at least it kept the same grim atmosphere with plenty of amusing bloody vampire kill scenes. Even if you weren’t in love with the plot, you could at least find some satisfaction in the action scenes. But Blade: Trinity? Dear God, this was an utter mess all the way around. Even Wesley Snipes himself apparently hated this film.

When we first see Blade, he's getting framed for murder by the most emo-looking early ‘00s vampire squad ever.

Blade is tricked into killing a human familiar instead of a vampire — meaning he has to leave an actual body behind instead of a pile of evidence-erasing pile of dust. This puts Blade on the FBI’s radar as public enemy number one.

Okay, by Blade’s own admission, he’s killed over a thousand human familiars and hasn’t had issues with the police before. Surely he must have had some experience in body disposal? Otherwise, this just makes Blade look really sloppy.

Regardless, the FBI tracks down Blade and Whistler to their hideout, where they kill Whistler. (Again.)

So, is Whistler actually dead this time? Like, dead-dead? He’s not going to pop up on the other side of the world because he’s been “kidnapped by vampires” again, is he?

Meanwhile, Blade is so distraught he just surrenders to the police.

Okay, this is a load of bull. The Blade we came to love in the first movie killed his beloved mentor by his own hand to spare him from becoming a vampire — and did it without devolving into some self-destructive spiral. He got back to vampire slaying because too much was at stake.

Blade’s depressed ass is hauled to prison, where he’s about to be turned over to the Evanescence cosplayer vampires.

Jessica Biel introduces herself as Abigail, Whistler’s daughter. You might ask, wait a minute, wasn’t Whistler’s tragic backstory all about how vampires slaughtered his wife and children? Oh, yeah, but Abigail was his illegitimate child. I guess, widow Whistler still needed to get some. Abigail later found Daddy Whistler and told him she wanted to be a vampire hunter when she grew up.

So, when did Whistler find time to train Abigail while he was busy working with Blade? How is it that Blade knows nothing about her existence? There are way too many plot holes to count here.

Abigail Whistler is hardly a compelling or interesting character. She’s only there to be the arbitrary hot “bad-ass” chick who specializes in navel-revealing outfits. Oh, and she downloads playlists to listen to while she’s fighting.

No, seriously, this dumbass goes into battle wearing her earbuds so she can listen to music while she fights. Woman, did you ever stop to consider that maybe you might need to actually hear when you’re fighting? Heck, there’s a scene where she gets attacked from behind, and she would’ve definitely noticed beforehand if she hadn’t been wearing her goddamn earbuds. Soundtracks don’t translate well to real life, people, and quirks do not equal character development.

I can only feel sorry for Ryan Reynolds here. He’s clearly trying so hard with his role as Hannibal King— the former vampire turned walking one-liner machine — and desperately hoping to become an internet meme. Sadly, this is 2004, so Reynolds still has a long way to go with crappy superhero characters before he lands the Holy Grail of comic book movie roles. Damnit, I can’t even hate him here just because I know too well how much talent he has when cast in a well-done superhero film.

So, who’s our Big Bad Blade Movie Villain? Count Dracula, of course! The My Chemical Romance cover band crew wants to resurrect the First Vampire so they can use his blood to create a new, all-powerful race of vampires. I know I joke about how everyone ends up fighting Dracula at some point, but honestly, this feels a little lazy. It just seems like the writers couldn’t be bothered to incorporate a new or creative villain and thought it would save time if they used a ready-made one like Dracula.

And more offensively, this is the lamest-looking Dracula ever.

Would you believe this is the Prince of Darkness? He looks like the lead singer of a ‘00s emo boy band. And just to make him even douchier, everyone in the movie keeps referring to Dracula as “Drake.”

There’s even a scene where Dracula goes into a gothic Hot Topic-like store full of Dracula-related memorabilia.

No joke, they even sell Count Chocula cereal — I think the writers may have been delving into vampire fanfiction for inspiration at this point.

This is the look of a man who just wants his fair share of royalties.

Blade and crew manage to kill Dracula and the other vampires with a chemically engineered virus designed to kill all the world's vampires when released. But the virus comes with a side effect for Blade: Vampire coma.

Thankfully, Blade's fine — he randomly wakes up after a while and gets right back into the slaying game!

But wait, aren't all the vampires in the world dead by now? What's left for him to slay? I guess if we go by the alternate ending, there's a chance for Blade to switch his niche to werewolves now.

Blade II lacked a clear plot, but there were still some well-executed action scenes. Blade: Trinity didn’t even have that going for it. Not only did we get an inconsistent story, but the action scenes are bland and lacked the fun vampire gore of the other films. The visuals don’t draw the eye and keep the audience’s attention. The other characters are lifeless cutouts, and they don’t help Blade develop in any meaningful way.

In any case, at least we can at least be assured that Whistler is dead for good this time.

'THE BATMAN VS. DRACULA' REVIEW: THE SCARIEST JOKER OF ALL TIME?