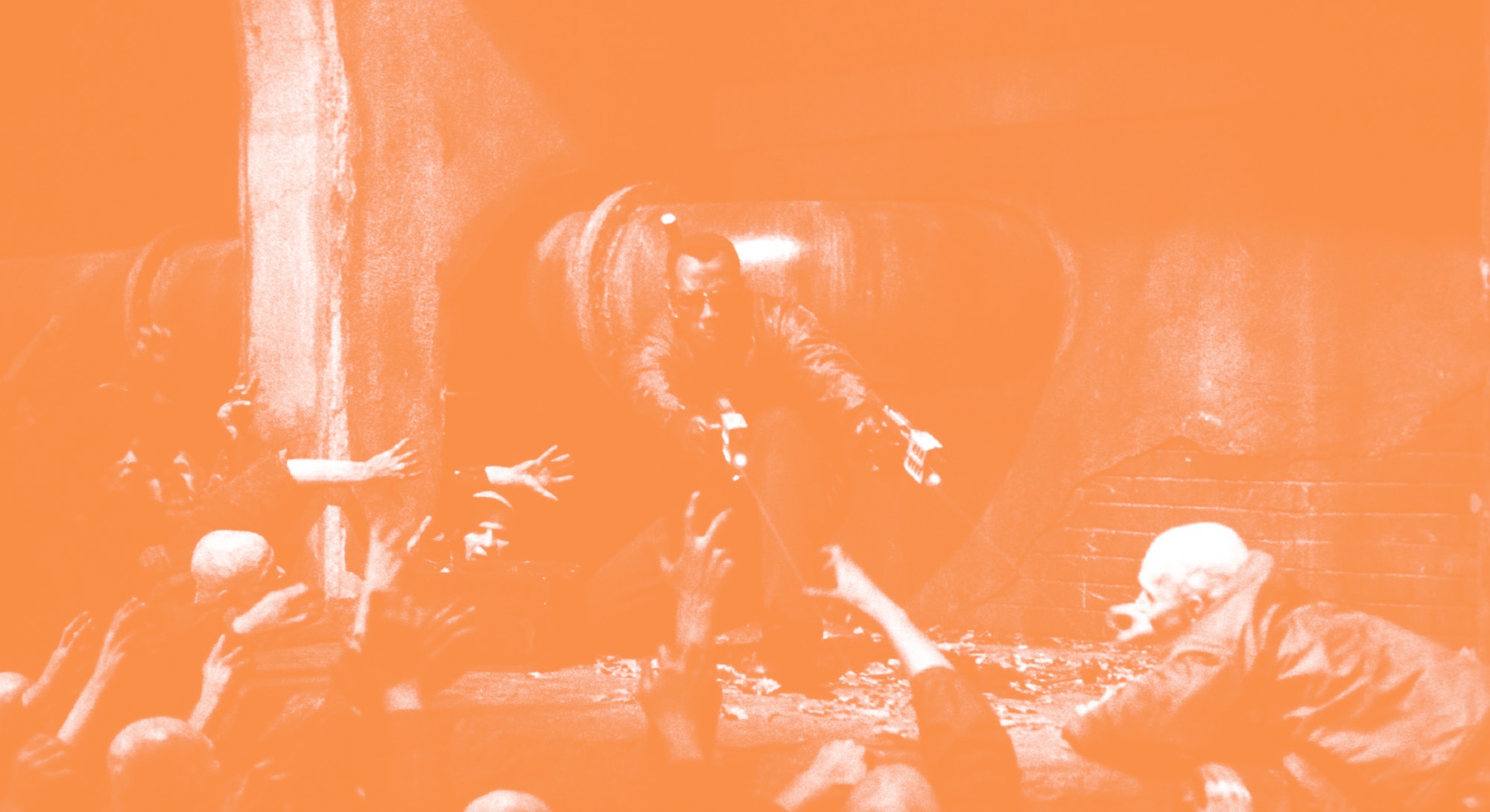 The first Blade movie is a classic.

It may not be particularly deep, even by Marvel movie standards, but if you want to see an awesome comic book character fight vampires in a magnificent blast of blood and (tasteful) gore this is the movie for you. Blade II offers the same dark atmosphere, techno music infused fight scenes, and plenty of delightfully senseless vampire violence. But, unlike the first one, this sequel left me very...confused.

When we last left off with Blade, he had saved the world from vampire frat-boy Deacon Frost but sadly lost his beloved mentor, Abraham Whistler. Despite Whistler’s death, the "dhampir" Blade continues on the path of righteousness and protects humanity from vampires with Dr. Karen Jenson aiding him. It was heavily implied that Karen would basically become the new Whistler, assisting Blade in his mission from behind the scenes and keeping him stocked up on his bloodthirst suppressant serum.

Blade II opens with a heavy expository monologue that recaps the first movie. Lengthy bouts of exposition are not my favorite method of presenting a movie’s plots— most of the time, it’s a lot of telling and little showing. However, it’s only the opening scene, so I’m willing to give this a chance.

But here’s where I get thrown. During his monologuing, when Blade mentions Whistler, this is exactly what he says:

“Two years ago, he [Whistler] was attacked…”

I mean, you killed him before he could actually become a vampire. But close enough.

“I should have finished him off…”

Um...you did that, dude. Remember?

“Now, I'm hunting him. I will find him. And nothing will stand in my way.”

Did I miss something? I distinctly remember a Whistler death scene in the last movie. I checked— I did not imagine it. Blade definitely sent Whistler to join the League of Extraordinary Dead Mentors in the sky so that he wouldn’t become a vampire. And suddenly, the writers are changing their minds, and Whistler’s going to be alive again?

So, after one massive retcon, Blade tracks Whistler down and rescues him from what appears to be a giant Tylenol.

Oh, and Blade gives him a quick anti-vampirism shot. All better!

Again, through more exposition, we’re told that Frost’s minions kidnapped Whistler, tortured him, and healed him so that they could keep torturing him. They apparently just dragged him— pod and all— around the world for shits and giggles. This is not only lazy writing, but it also cheapens the ending of the last film.

What’s even more insulting is that there is no sign of Karen Jensen, who had a pretty major role in Blade. Yeah, she had her damsel-in-distress moments, but she had a real purpose. She was a hematologist who reversed her oncoming vampirism, developed an exploding-vampire weapon, and refined Blade’s anti-bloodthirst medication. A second movie would have been a great opportunity for more character development.

So, who has Blade shamelessly replaced Karen with as his new assistant? This asswipe.

Meet Norman Reedus — I mean, Scud. He’s a vacuous, pot-smoking burnout who tries to be the movie’s comic relief. Scud is Blade’s new weaponsmith, but c’mon, would you trust this guy to handle your arsenal?

Blade then has to team up with a group of pure-blood vampires to fight an infection that turns vampires into “Reapers”— creepy-looking but almost invincible vampires that feed on (and infect) other vampires with their gross tentacle-faces.

The pure-bloods are freaked out, so the ancient vampire leader, Damaskinos, and his daughter, Nyssa, ask Blade to call a truce and help them out.

Blade reluctantly agrees, but only to protect humanity from a new, rabid breed of vampire.

When Blade seems to be getting a little too friendly with Nyssa, Whistler pulls him aside to caution him. Blade brilliantly counters with the old “keep your friends close and your enemies closer” crap.

Whistler’s expression says it all.

Things continue to get worse when it’s revealed that the vampire leader, Damaskinos, engineered the Reaper virus to create a new breed of invincible vampires— the first one just came out wrong and started spreading it. Oops.

And that pissant, Scud, has been in on it the whole time because he’s Damaskinos' familiar. Blade claims he totally knew all along that Scud was scum— and blows him up.

This is the most satisfying part of the movie, and it automatically makes Scud better than any Rob Schneider character. He actually dies in a glorious explosion, showering blood and guts from above.

Blade almost gets dissected by Damaskinos’ men, but Whistler comes to save him with an “I’m not giving up on you” speech.

In the end, Blade is back to his usual vampire hunting ways. Please don’t ask me what happened to Whistler because we literally do not see him again after saving Blade with his pep talk. For all we know, he’s been kidnapped or killed by vampires, again.

Blade II is entertaining enough to watch for its fight scenes and gory vampire kills. Plotwise, it’s definitely not as good as the first. I can only describe the writing as sloppy. It was exposition overload— so much relied on the characters hurriedly filling in the blanks for the audience.

And with all that exposition, you would think someone could have let us know what happened to Karen Jenson. She really didn’t deserve to be replaced. Especially not with this dickwad.

'DAREDEVIL' 2003 IS SO BAD IT MAKES 'BATMAN VS. SUPERMAN' LOOK GOOD