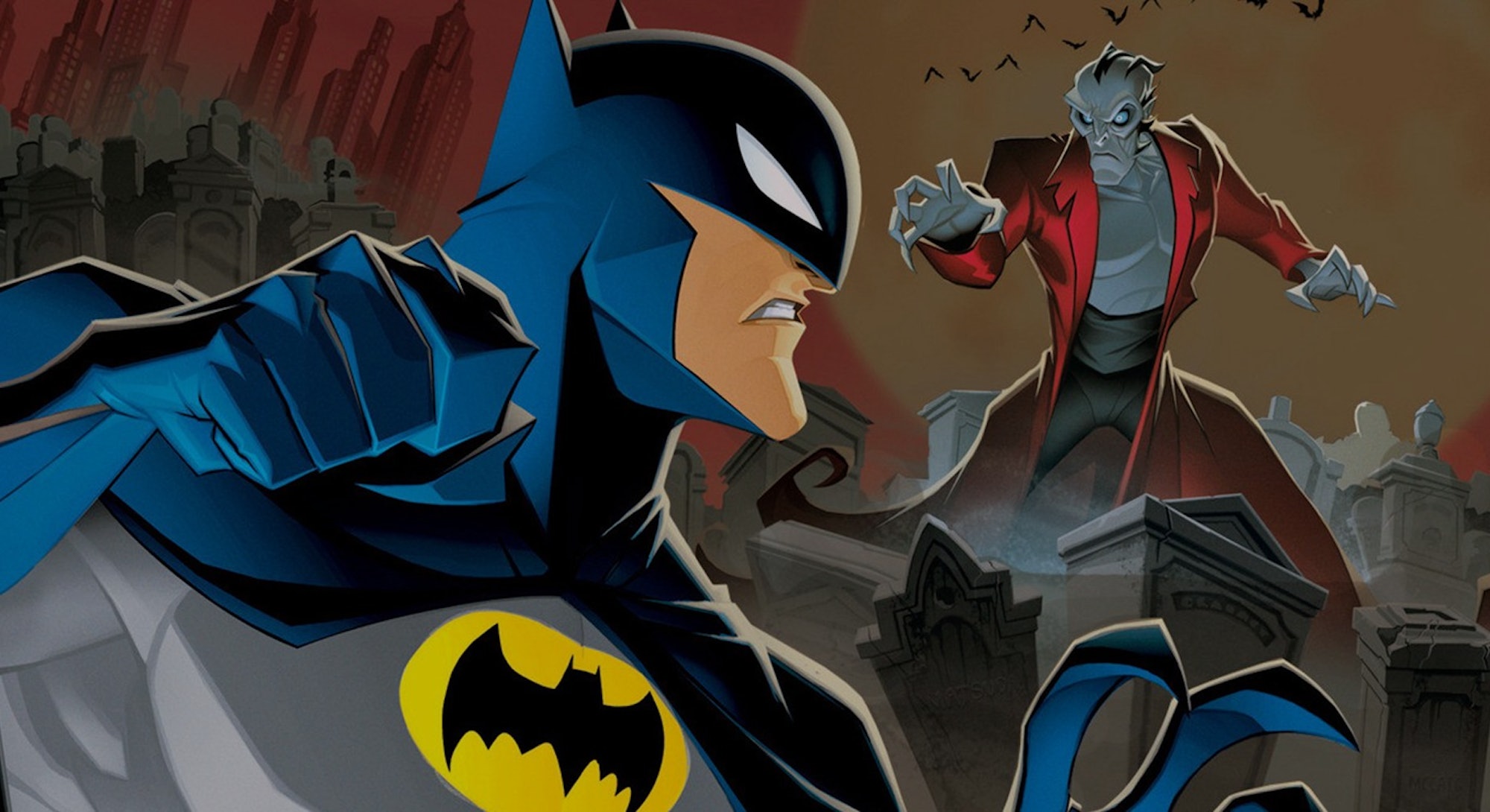 It seems like every superhero (or semi-hero) has to fight Count Dracula at some point in their careers.

From Buffy to Spider-Man to Abbott and Costello, fighting the original vampire is a rite of passage. Much like saving Christmas, it’s practically mandatory. So, naturally, it just made sense to let Batman have a go at him. You know, because they're both associated with bats, I guess.

In 2005, the animated feature The Batman vs. Dracula was released— directly the DVD/video. This fact alone should probably be enough to clue you in on the quality of this movie. But in the spirit of Halloween, let’s see what happens when the Dark Knight faces off against the Prince of Darkness.

The movie opens with the Penguin escaping from Arkham Asylum— successfully, of course; Arkham deals with these breakouts practically on a daily basis. Penguin goes to Gotham Cemetery to locate a money stash hidden in one of the crypts.

Shockingly enough, all he discovers is a dead body (imagine finding one of those in a graveyard). But this isn’t just any old dead guy, it’s Count Dracula! The vampire somehow got himself transported all the way from Transylvania to the United States and thrown in a cemetery vault in Gotham City.

After cutting himself and bleeding on Dracula’s corpse, Penguin inadvertently resurrects the ancient evil. Whoops!

Now, Dracula’s back and ready to chow down on some fine Gotham necks — starting with the cemetery security guard, turning him into a vampire. He leaves Penguin alone and just turns him into his personal Renfield.

Suddenly, Batman finds there’s an epidemic in Gotham where people keep disappearing and popping up as vampires. Dracula’s curse isn’t especially complex here — just bite ‘em and turn ‘em. No one dies for good; this movie might be a lot bloodier than most Batman cartoons, but it’s still a Batman cartoon after all.

Dracula eventually turns up at Wayne Manor while Bruce is hosting an event. The villain sports his long, black cape, savors the taste of raw meat, openly shudders at the sight of garlic, and introduces himself as “Dr. Alucard.” Yeah, this version of Dracula isn’t about the subtlety.

Given the high influx of vampires in the city, Bruce is able to deduce reasonably quickly that this “Alucard” guy is probably Dracula.

Oh, yeah, and Dracula brazenly hits on Bruce’s date, Vicki Vale (hello, Vicki, haven’t seen you outside of the comics or the 1989 Batman movie). I appreciate that Vicki doesn’t automatically start swooning over Dracula’s suaveness. Because Dracula is not suave, he’s just creepy. Thankfully, Vicki picks up on this and explicitly rejects her undead suitor.

Vicki Vale aside, the best part of the movie is the Joker’s appearance. Thinking that the Penguin is hoarding treasure, Joker tries to break into Dracula’s coffin while he’s still asleep. Joker swiftly becomes Dracula’s "breakfast in bed, freshly-squeezed.” That line made me chuckle.

The Joker as a vampire is something I’d never pictured before, but it’s pretty amazing. He absolutely throws himself whole-heartedly into the vampire-thing. He utterly gorges himself on blood. It’s hilarious to watch.

I guess I should have expected this — once the Joker gets a plan or an idea he just runs with it. And Vampire-Joker is truly a wonder to behold.

Batman is able to subdue Vampire-Joker and use him as a guinea pig for his new anti-vampire vaccine. The serum does work and turns the Joker human again. And ever so conveniently, the vaccine happens to erase the subject’s memory of all memories of Dracula or being a vampire at all.

However, it turns out there’s a more significant component to Dracula’s “change everyone in Gotham into vampires” scheme (A plan, I might add, that seems poorly thought out. When everyone’s a vampire, where’s their food source going to come from?). Dracula wants to use Vicki Vale’s soul to resurrect his dead vampire bride. And this vampire bride’s name? Carmilla Karnstein. At this point, I’m rolling over with laughter.

For anyone unfamiliar, Carmilla Karnstein is the title character of the Gothic novella, Carmilla. Carmilla was indeed a vampire, and her story actually pre-dates Brahm Stoker’s publication of Dracula by about twenty-six years. But here’s the thing — Carmilla is widely recognized as a lesbian vampire. She digs (and very sexually bites) the ladies. Someone might want to tell Drac that his so-called bride doesn’t swing that way.

Dracula may claim that Carmilla’s dead and was disintegrated in the sunlight, but I’m willing to bet Carmilla just faked her own death to get out of dodge. She wasn’t feeling the spark with Dracula and went off to find herself a hot lady vampire. Dracula’s probably one of those lame bros who thinks he's so awesome that he can convert a lesbian.

Of course, Batman manages to kill Dracula (for now, anyway — that guy always comes back) in the end and uses his de-vampire cure on all the infected people.

And since the victims conveniently can't remember anything, the disappearing persons mystery can be safely blamed on the Penguin. No one pays any attention to Penguin’s blathering about vampires as he’s hauled back for electro-shock therapy back at Arkham— at least until he breaks out next week.

Honestly, I would give this movie a resounding “meh.” Personally, I’m not a huge fan of putting Batman up against monsters or the supernatural — it just feels out of his natural element. Despite the extra blood and violence (this is definitely not targeted for young kids), I didn’t find The Batman vs. Dracula to be especially compelling or exciting. At best, it’s pretty goofy; at worst, it’s just a run-of-the-mill Halloween monster special — just with Batman. Luckily it’s not a long movie, so if you want to check out the more entertaining scenes with Vampire-Joker, go for it, but don’t have high expectations beyond that.

'AVENGERS: ENDGAME'? THE BEST SPIDER-MAN CROSSOVER IS THIS '80S CARTOON

MONSTER SQUAD IS PURE '80S DRIVEL, BUT THAT'S WHY WE LOVE IT