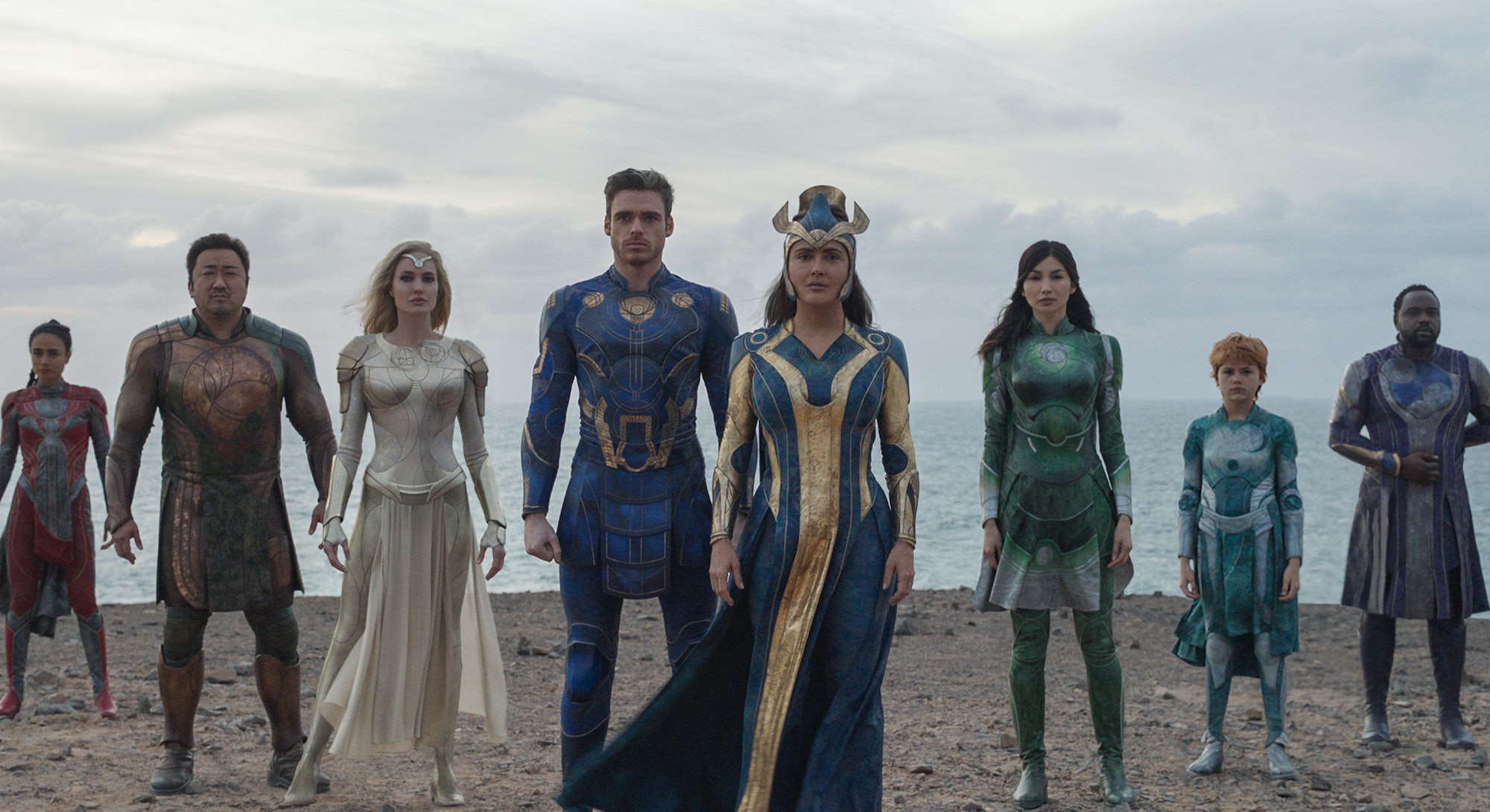 What is Eternals really about?

In writing the screenplay for Marvel’s most ambitious movie yet, Kaz and Ryan Firpo had to ask themselves that question early and often.

“You’re playing in this huge, 25 movie Marvel sandbox, and what you’re trying to do is make art,” Kaz tells Inverse. “For us, it starts with: What is this movie about? What do you want people to think about? That becomes the core. Now, pick characters and their superpowers. How do each of these elements advance that big question?”

Eternals, now in theaters, is one of the Marvel Cinematic Universe’s most complicated projects, not the least of all because even die-hard fans might reasonably ask, “Eternals who?” Based on the 1976 comics by Jack Kirby, a legendary comic-book artist, Eternals centers a group of immortal aliens who are tasked by their masters, the Celestials, with protecting Earth from monstrous beings known as “Deviants.”

Unusual by Marvel standards, the plot spans thousands of years, with characters — like Sersi (Gemma Chan), Ikaris (Richard Madden), and Thena (Angelina Jolie)— inspiring Earth’s most enduring myths. But the Eternals have souls too, succumbing to human emotions like love, regret, joy, and anger.

Before getting onto Marvel’s radar, the Firpos (who are cousins) were aspiring American screenwriters of Japanese descent who hit it big when their original script, Ruin, made the Black List in 2017. (It is still in development with Margot Robbie attached to star.)

“That was a life-changing moment,” says Kaz. “We didn’t have an uncle to open doors. We just wrote something we believed in. When the world says, ‘Hey, we like your script,’ that’s saying, ‘Hey, we like your mind.’ Eternals is the culmination of a ten-year overnight success.”

The Firpos don’t necessarily see themselves as sci-fi writers, but they are intrigued by the genre’s possibilities.

“Eternals is epic fiction. It’s not just deep sci-fi,” says Kaz. “We’re interested in the chance to reflect the world we live in and the world we’d like to see.”

“I am interested in the macro view of humanity,” adds Ryan. “Not just in the scope of where we are now, but the history of this planet, everything around us. That's where sci-fi lives.”

“Eternals is using the lens of science fiction to ask big questions about purpose and responsibility and love,” adds Kaz. “Stories provide us an opportunity to ask big questions. If you come from a movie with a big question you're still grappling with, that's a great success. Because we’ve gotten you to think about what it means to be human for just a little bit.”

In an interview with Inverse, Kaz and Ryan Firpo reveal some of the biggest ideas powering Eternals, from the Marvel comics books they drew the most from to the forgotten series that was entirely off-limits, as well as the future of this new superhero team.

Where do you even begin to write a movie like Eternals?

KAZ FIRPO: Our stories begin with that big existential question: “What is this really about?” Who are the characters? What do they want? What do they need? With a story like this, where you have decades of lore from [Jack the] “King” Kirby, Jim Krueger, Alex Ross, [and] Neil Gaiman. You’re pulling from this incredible foundation.

RYAN FIRPO: There’s a debate in the movie about love versus duty, logic versus emotion. You know it with Ikaris taking a logical view about the Celestials, and Sersi having an opposite view. The fact they are in love complicates that. That’s something I am constantly struggling with and examining about myself, the idea of base logic versus emotions that I think we all struggle with from time to time.

What kind of reference material did Marvel provide? Whose comics did you refer to the most: Jack Kirby, Neil Gaiman, or someone else?

KF: The process began with Marvel handing us a 700-page PDF that had everything, every time the Eternals had appeared, even in Avengers [comics]. We read all of it. Comics are an incredible medium because they’re about different artists having different conversations in the shared universe. Comics inherently are about the multiverse; it’s different takes on these same stories. For us, it became [about] bringing our own story to the lineage. Earth-X was an uncanny bible that sat around in the writer’s room because it tackled huge ideas.

RF: Earth-X was definitely philosophical. Kirby was about getting really bonkers with everything — and [with] the visuals. Neil Gaiman’s run was really helpful in routing our Eternals into a modern-day setting and seeing them trying to exist as humans.

Eternals isn’t the first time the MCU has explored the idea of secret aliens on Earth. A few years ago there was the Inhumans television series, which was originally greenlit as a movie. Did the collapse of that project influence the making of Eternals in any way?

KF: In the Marvel Universe there's a lot of synergy, but also individuals telling great stories. There isn't this algorithm that makes Marvel movies great. They hire people who love what they do and let them do what they love. For us, Inhumans was part of that conversation only insofar as — this is a true story — they said, “You can't go to Hawaii.” Nobody gets to go to Hawaii because Inhumans totally burned that bridge. Beyond that, there wasn’t someone saying like, “We can’t do this, can’t do that.” The door really was open for us.

RF: I didn't know about Inhumans. When we first went in, they were telling us about Eternals. I was like, “This would be a good TV show.” Later I learned they kind of tried it on TV already. I don't know how much it influenced [the film.] It was just a different era, a different team, a totally different project.

Eternals could change the course of the MCU for years to come. How do you write a movie knowing it will influence a dozen more movies down the road?

RF: At Marvel, they’re playing chess. They’re grandmasters. When you play chess your objective is to checkmate the opponent, but you don’t know how you’re going to do it. It’s setting traps to give yourself multiple paths to victory. That’s what we’ve done with Eternals. We’ve created lots of doors, and which we choose to go through will be dictated by other variables. It’s not like, “What happens at minute 35 of this movie influences what happens seven years from now, in minute 80 of that movie.” That’s impossible. Nobody could keep that matrix in their mind. You’re just creating opportunities to discover.

What parts of Eternals would you say will have that impact?

KF: Dane [Whitman] has been involved with the history of the Eternals; there's even a run that’s bonkers [where] Dane hunts down all the versions of Sersi after she breaks up with him and kills them. It became an obvious choice Dane should be in this world, a great way to introduce this character. If opening weekend has been an indication, that ending [with him], people are stoked for Dane and where he could go.

Was Dane a character you wanted in the movie from the beginning?

RF: When we first started building the pitch, we had these character cards, like 50 characters. Dane kept coming to the top of the pile. When we did drafts, we did iterations where Sersi was single in the present day. Then we decided [it] would be valuable for her to have a human boyfriend. Dane was the obvious choice. I'm excited to see where he goes from here.

I was surprised to hear mention of Batman and Superman in Eternals. How did references to DC Comics slip past Kevin Feige? What do the references accomplish?

RF: They definitely didn't get past Kevin Feige. He signed off on those. But we're always looking to ground the [MCU] in a world we know. And in our world, the MCU is influential, a big part of our media and public consciousness. They wanted to reflect a world like that in Eternals, but obviously, you can’t have them referencing MCU movies. This is a way to create the same world we live in without breaking the fourth wall.

We thought that would be fun and accessible for an audience to deal with the crazy elements that make up this movie. It's funny; I was watching the new season of Curb Your Enthusiasm where Larry is pitching shows at Hulu and Netflix. There seems to be a lot more crossover now of different corporate interests. I'm not sure where the references came from. But I get the reasons behind them.

KF: It's never quite as complicated. It was a conversation. “Wouldn't it be fun to have a little wink and nod that it exists?” I'm not sure it’s as nefarious as that Kevin's called Zack [Snyder] to work on Kevin Feige’s Justice League reboot. I don't think it's that deep. Yet. But it’s just that we have a lot of love for that universe.

One scene that’s attracted criticism involves Phastos, played by Brian Tyree Henry, expressing remorse over the ruins of Hiroshima in 1945. Some have pointed out the awkward optics of the scene. What are its origins and how would you address those criticisms?

KF: This is a movie about the human experiment. If you’re immortal, you have seen humanity’s greatest hits and their greatest failures. This was always in the original draft of the movie and in every version. It’s something Chloe fought really hard to include. We are the first Disney movie I know that talks about genocide.

The bombing of Hiroshima is one of those things that, if you went to California public school, the class is divided. Half the class defends this horrific thing, and the other has to explain why it should never happen again. “Is it a good thing? Was it a bad thing? Did it save more lives because this bomb was dropped?”

As somebody who is Japanese-American and has family in Japan, this is a big part of my life and my history. You don’t want to avoid human tragedy. We want to make people think and talk about it so these things don’t happen again. It’s not cheapening tragedies. It’s about forcing audiences of all ages, races, and places to reckon with the things we’ve done.

RF: This movie was structured around the present-day storyline, but the flashbacks are about the Eternals’ evolution and dissolution as a family. We wanted to pick moments that were [humanity’s] greatest failures. We're looking for the ultimate breaking point where a group of immortal space gods would say, “Humanity has gone too far. We can't help them.” That's where we went. It was an important paradigm shift for humanity. Through the lens of the Eternals, it was a time they felt humanity had gone beyond their help or control.

Marvel has actually said that a direct sequel to Eternals isn’t necessary. But have you guys thought about a sequel? What do you think the future holds for the Eternals?

KF: The door is wide open. We've gone to the very origins of the universe. And we're going out into the deepest reaches of cosmic space. This is a movie that begs a lot of questions, and it has a lot of answers. Is there a ten-episode Disney+ series going back in time to hang out with Thena in ancient Greece? Is there a series of movies that are going out deep into the cosmos? We're excited to see it as much as the audience.