“Maybe my work is too bizarre” 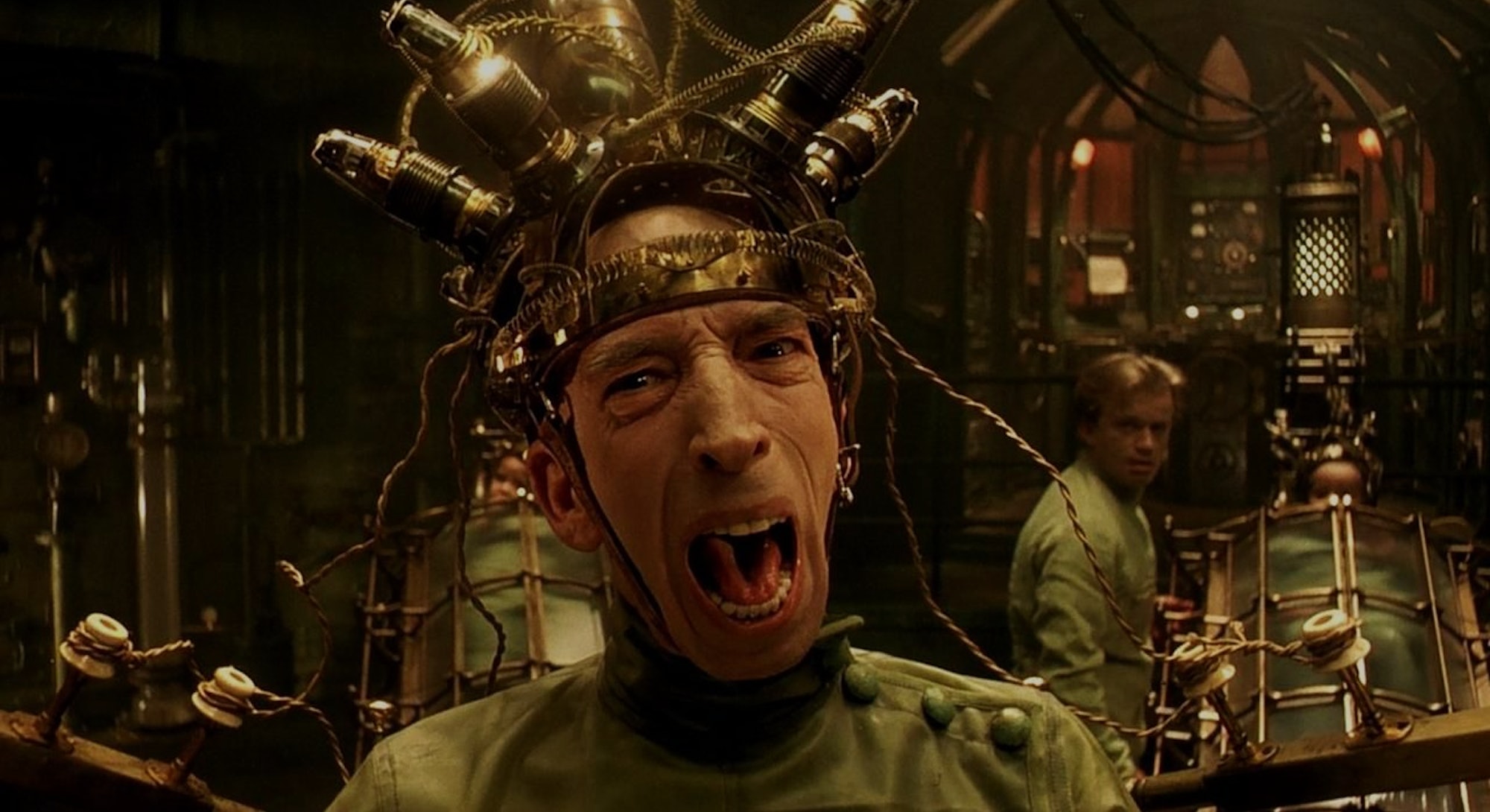 “There is a typology of science fiction films out there,” says visionary illustrator and filmmaker Marc Caro.

Speaking to Inverse via an interpreter in France, he rattles off a list of classic titles: “2001: A Space Odyssey, Blade Runner, Alien.” Each is emphatic in their depiction of their worlds, and yet as Caro sees it, largely cut from the same cloth. And while he applauds Gattaca and The Matrix for breathing new life into the field in the late ‘90s, he glosses over the efforts of another luminary who, earlier that decade, had transformed perceptions of what sci-fi cinema could be: himself.

Caro is the artist responsible for Delicatessen and The City of Lost Children; a pair of game-changing dystopian fantasy films from France, co-directed with Jean-Pierre Jeunet (Amelie) in 1991 and 1995. With grotesque, carnivalesque characters and bleak near-future settings inspired by photography, technology, and architecture of years gone by, Caro’s visionary world-building would go on to influence everything from the Alien franchise to Guillermo Del Toro’s Oscar-winning The Shape of Water. Today, he might be perceived as a pioneer of contemporary steampunk cinema.

With Jeunet and Caro’s dynamic debut Delicatessen celebrating thirty years on April 17, Inverse caught up with the latter to reminisce on the fruits of his emphatic career — from his roots in legendary French comics anthology Métal hurlant, to his cinema ascendency in the ‘90s, and the future of science fiction via another French-speaking filmmaker.

“It was the holy grail,” says Caro, describing the decade he spent working for psychedelic comics anthology Métal hurlant. As one of the first publications of its kind to be bought from France for U.S. distribution, its influence can’t be understated — and it was here that the Frenchman first made his name as an illustrator and editor in the mid-‘70s, rubbing shoulders with some of the most prestigious sci-fi artists of his generation.

“It was a crossroad of counter-culture imagination,” Caro says. “Anything could happen. We called it the machine de rêve — the dream machine.”

With Moebius’ iconic, pterodactyl-riding explorer Arzach its talisman, Métal hurlant — and its American counterpart, Heavy Metal — became a blueprint for the sci-fi aesthetic that dominated cinema in the ‘70s and ‘80s.

Founding artist Moebius was duly plucked by Hollywood — his design skills utilized in everything from Tron to The Fifth Element. It didn’t take long for Caro to follow suit and forge his own path to the silver screen.

A Sweeney Todd-esque tale of a cannibalistic butcher who menaces the inhabitants of a desolate apartment block in a famine-afflicted future, Delicatessen distinguished itself with a striking visual aesthetic inspired by the monochrome photography of French-Hungarian photographer Brassaï, and the fantasy films of Terry Gilliam.

“I made thousands of drawings,” says Caro of the film’s vivid imagery. “With every one of my features, I drew every single frame.” And with the great George Méliès (the pioneering filmmaker behind early cinematic innovations like 1902’s Le voyage dans la Lune) as his foremost inspiration, Caro maintains that it is the film’s inherent Frenchness that is at the core of its imagery.

Amidst a pantheon of oddball charms (from musical-saw-and-cello duets to Rube Goldberg-style suicide contraptions), such memorable images as an elderly man sitting in a flooded apartment surrounded by frogs and escargot stand out like panels from a comic. The casting of a Caro and Jeunet favorite — the rubber-faced Dominique Pinon — as the film’s retired clown protagonist, meanwhile, was inspired by the gueule of actors from pre-war French cinema, who were defined by their strongly expressive facial acting, says Caro.

Years later, Hollywood came knocking — but like a gestating xenomorph presented before a human ribcage, the Alien franchise would split Jeunet and Caro apart.

“Alien: Resurrection was a big machine,” recalls Caro. And while he rues Hollywood’s reductionism when it comes to “building the imaginary,” that wasn’t the dealbreaker in this instance. “Alien’s imagery is quite European, that’s its strength,” he says — citing creature creator H.R. Giger’s Swiss-German heritage, and former comrade Moebius’ concept art for the first movie. But without greater creative freedom over the film’s design, Caro had no desire to co-direct this fourth entry. “Decisions had already been made with the creation of the alien, the spaceships,” he says. “Instead, I helped Jeunet with the costume design.”

One can only imagine what Caro’s xenomorph might have looked like (though he insists that the franchise is at its most “formidable” when there is only one). But a look back on 1995’s The City of Lost Children — Caro and Jeunet’s second and, as of today, final feature-length co-directorial collaboration — shows clearly why the duo were such a perfect fit.

A twisted fantasy starring Ron Perlman — as a street performer whose kid brother is kidnapped by a crazed scientist living aboard an oil rig with an army of identical clones — The City of Lost Children remains criminally overlooked. A passion project conceived 14 years prior, it combined the vivid dystopia of Brazil with a dripping shipyard steel setting to create a vivid, green-gold steampunk classic.

One vivid scene finds rows upon rows of identical, sunglasses-wearing zealots gathering in a ship’s hull before a roaring furnace — an image that recalls the vast, industrial prison planet of Alien 3. A flashback scene, meanwhile, takes place in a laboratory lined with huge glass tanks where bright green fluid houses babies and brains in a state of suspended animation. It’s a scene that would parallel one of the most memorable in Resurrection — wherein a re-animated Ripley torches a room full of failed attempts at bringing her back to life.

It would take two decades for Caro and Jeunet to reunite in a creative capacity — for Caro’s short film Loop, in 2018. It was completed the same year that the duo curated a “cabinet of curiosities” from their films in an exhibition of props, concept art, and memorabilia in France.

The years in between have been lined with fascinating projects for Caro — from overlooked space-prison feature Dante 01 to designing sets for Gaspar Noe’s psychedelic odyssey Enter The Void. But he rues the “very difficult period for cinema” in France today that has made it impossible to get many of his boundary-pushing projects off the ground.

“Maybe my work is too bizarre,” he says of the obstacles in securing financing for these unfulfilled works. They include a feature on Kafka and three film projects with controversial artist-director Alejandro Jodorowsky (The Holy Mountain) — including an unrealized sequel to acid western El Topo. For now, says Caro, he’s gone back to his roots — a VR project that serves as an homage to George Méliès is nearing completion, while his experimental drone and dark ambient music as ‘MonoB’ harks back to Caro’s days as a member of ‘Parazite’ — the experimental electronic group behind the soundtrack to 1981 short Le bunker de la dernière rafale.

As far as the future of science fiction is concerned, Caro has great faith in another French-speaking filmmaker.

“I can’t wait to see [Dune],” he says of Denis Villeneuve’s forthcoming adaptation of Frank Herbert’s 1965 literary classic — while applauding the director’s integration of the aesthetics of the Chernobyl and Fukushima nuclear disasters in Blade Runner 2049.

With the forthcoming sci-fi epic embracing so many touchpoints of Caro’s own career — Alejandro Jodorowsky’s Dune attempt in the mid-‘70s to David Lynch’s visually distinctive but undercooked 1984 feature — it's easy to understand why Caro is excited.

“If I manage to make another film, I am going to try and do even better.”

As for his own future? Caro’s still motivated to deliver his pièce de résistance. “There are things we have made that I adore,” he says of his and Jeunet’s films. “[But] in France we have a tradition of compagnonnage — where you learn and learn until one day you finally make your masterpiece. I feel like I have a bit of this sentiment.”

Whether that final masterpiece turns out to be Alien 5, a latter-day Dune, or simply the imagination of Marc Caro fully realized on film is yet to be seen. But he’s determined either way: “One day I will make something truly outstanding,” Caro concludes. “If I manage to make another film, I am going to try and do even better.”